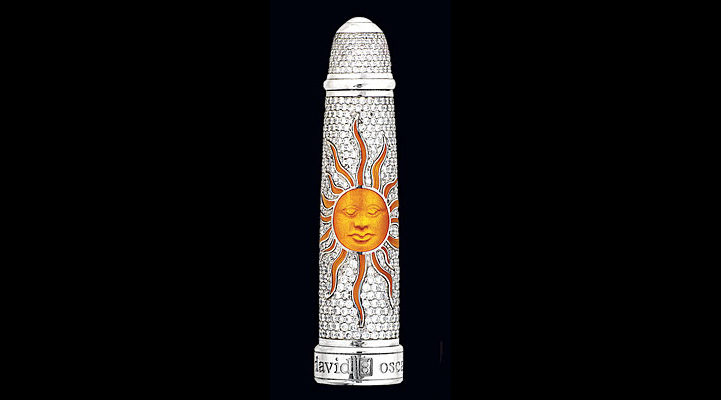 Some 34,000 years ago, people carved artworks from the ivory tusks of the mammoths that roamed the region now known as Siberia. More recently, the German writing instrument manufacturer Faber-Castell utilized the mammoth ivory, which is found in the Siberian ice as it breaks apart during the summer months, for the Graf von Faber-Castell Pen of the Year 2006 (800.311.8684, www.faber-castellusa.com). Each year, Faber-Castell selects a rare or unusual material, along with an artisan who specializes in working with it, to create a design that is limited to the quantity that the company can produce in a calendar year. For the 2006 edition, Jürgen Schott, an ivory carver from the Odenwald region near Heidelberg, Germany, engraved the mammoth ivory tiles that were inlaid on the ebony wood barrels of the $2,500 pens. Numbered and signed by Schott, each of the 2,000 pens features platinum-coated detailing and a bicolor 18-karat gold nib. For the 2007 edition, Faber-Castell partnered with stonecutters in Idar-Oberstein, Germany, to produce pens made of petrified wood.

The Waterman Sérénité Collection d’Art (800.237.8736, www.waterman.com), a set of four pens priced at $44,000, is intended to evoke the elements through its use of materials that represent fire, water, air, and earth. Sérénité Feu (fire) features four glowing colors of lacquer sprinkled with gold dust; Eau (water) uses sterling silver, lacquer, and mother-of-pearl to convey the fluid quality of its namesake; Air pairs gold dust and eggshell; and Terre (earth) combines sterling silver and American crocodile skin. Japanese craftsmen decorate the bodies of the pens, each of which was conceived by a team of French jewelers who partnered with Waterman’s precious metals workshop. The brand produced 161 sets. The sum corresponds to the first three digits of the divine proportion principle, a mathematical formula for segmenting proportions to create balanced and aesthetically pleasing forms, many of which are found in nature.

The Ancient Greeks, whose mathematicians and scientists pioneered the divine proportion rule, are the subject of the Omas Ellas (516.741.0011, www.omas.com) fountain pen, priced at $16,500. The first of the Masterpieces Down the Centuries collection, Ellas is crafted from 18-karat yellow gold and the brand’s proprietary cotton resin. A single diamond crowns the cap, which emulates the Choragic Monument of Lysicrates near the Acropolis of Athens. The pen’s barrel features the bust of the Apollo priest Laocoön re-created from the marble statue of Laocoön and His Sons, owned by the Vatican Museums. Omas will produce one Masterpiece design every two years, and it will limit each collection to 50 pieces.

The Krone Mozart (847.215.0011, www.kronepen.com) fountain pen commemorates the 250th anniversary of Mozart’s birth by playing strains of his “Eine kleine Nachtmusik” (“A Little Night Music”). The Swiss company Reuge fitted the pen’s cap with a music box, and Russian artists painted images of a young Mozart on the faceted mother-of-pearl bodies of the pens. Krone has produced 50 examples of the $12,000 pen.

The Crocodiles de Cartier Exceptional (800.227.8437, www.cartier.com) fountain pen is embossed with a crocodile-skin pattern and accented with two finely sculpted crocs—one on the cap and one on the barrel—facing eye-to-eye. The $4,000 pen, which is appointed with peridot and citrine cabochons, is the second in the Menagerie Signed by Cartier series, which debuted in 2005 with the Panthère de Cartier.

More than 11 carats of pavé diamonds and more than 1,400 calibrated sapphires totaling 13 carats adorn the one-of-a-kind David Oscarson Celestial (www.davidoscarson.com). The $150,000 fountain pen, which Manhattan jeweler Cellini (800.235.5464) commissioned and already has sold, is crafted from white gold and, in addition to the gems, features refined guilloche engraving layered with brilliant saffron and translucent white enamel.