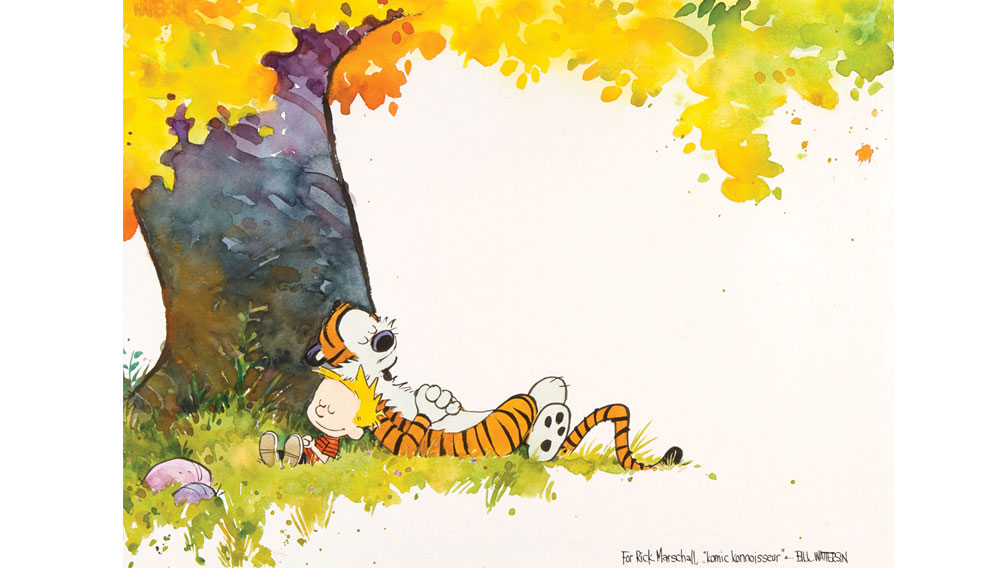 Calvin and Hobbes creator Bill Watterson is the J.D. Salinger of comic-strip artists—worshipped by his fans and pathologically media-shy. So when Heritage Auctions offered an original Watterson artwork featuring the 6-year-old Calvin and his faithful tiger Hobbes, it became the latest in a string of coups for the Dallas auction house, which launched in 1976 with a focus on coins and evolved into a behemoth covering 34 categories of collectibles. Among its most coveted recent offerings are a game-worn 1908 Cy Young Red Sox road uniform (sold for $657,250 in August), virtually complete allosaurus and stegosaurus skeletons (sold together for $2.7 million in June), and in February, the Calvin and Hobbes watercolor. Watterson painted it as cover art for a 1989–1990 calendar, and signed and inscribed it. No published piece of Calvin and Hobbes art had ever gone to auction, leaving Heritage vice president Todd Hignite to base the $50,000 estimate partly on “knowing how many people we have who will go nuts for the chance to get this.”

Go nuts they did. Heritage opened the online bidding at $1 three weeks before the February 23 sale. By the time the piece reached the podium in New York, it was at $85,000. A private collector bidding over the Internet took it home for $107,550.