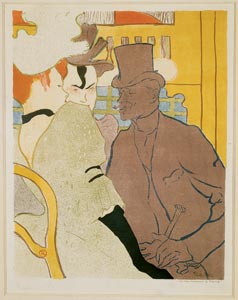 A Manhattan dealer who gives prints and drawings the utmost

With millions of dollars’ worth of art and furnishings in tow, the

(TEFAF). And among the hundreds of booths in which wares are displayed, the one

belongs to David Tunick. At this year’s fair, prints and drawings by Rembrandt,

the Elder hung on the golden beige walls. It was impossible to miss the complete

1947 portfolio of Henri Matisse’s vibrantly colored Jazz series, which sat on a

table near the front of the booth. Stirring the most excitement, however, were

the seven Fragonard drawings hanging on the right wall.

date to the 1780s, depict scenes from an epic poem, Orlando Furioso, and were

part of a collection belonging to the late John Nicholas Brown, a noted

collector of Old Master drawings. Fragonard’s genius radiates from the page, his

flowing line work evoking the foliage of a tree, the wafting strands of a

horse’s mane, and the outstretched hand of a dying man. Soon after the fair

opened, five of the seven drawings were sold, as were the Matisse Jazz and

several others. Tunick took a number of choice works abroad with him, but he did

not empty his Manhattan gallery of its treasures. He estimates that he has from

Four Horsemen of the Apocalypse, which did not go to Maastricht.

dealt in prints and drawings since 1966, shortly after he graduated from

Williams College in western Massachusetts. He had planned to pursue a career in

the joys of art. “We were surrounded by the real thing,” he says. “We passed

objects around in class. The immediacy of touching something that Dürer or

Rembrandt touched was a wonder to me.”

At the age of 22, Tunick began

selling artworks. “I would persuade dealers to give me prints on consignment,

and I would set up one-day print exhibitions at colleges and universities,” he

says. He traveled between shows in a Volvo station wagon with Besnard, a Saint

Bernard that he named after a French printmaker from the 19th century. Today,

Seventh Regiment Armory, a few doors down from the restaurant Daniel.

and respect accorded to paintings. “Old Master prints should be shown in a

dignified and formal manner,” he says. “They are not the poor cousins anymore.

It’s one of the few areas where masterpieces can still be acquired.” Tunick’s

stock ranges from the 15th century to the 20th, but one theme prevails. “I’m

into artists who are considered classic, but were cutting edge and avant-garde

in their own time, who did things no one had done before,” he says. “I can feel

what’s new in it. It touches me deeply.”

Julian Agnew represents the sixth generation of his family

long-term view,” he says. “I’m fortunate to have a great business, and I’m keen

to keep it going and hand it on to the next generation.” The offerings he

momentum. Visitors clustered around The Flight into Egypt, a large, impressive

work by the 17th-century painter Francisco de Zurbarán, and an early Poussin

painting, Holy Family with St. John, which had not been shown in public since

Paintings are hardly the firm’s only specialty. In early 2004, Agnew’s

mounted its 131st annual exhibition of watercolors and drawings, which included

firm’s longevity as an invaluable asset. Pointing to three paintings that

Agnew’s previously sold to a loyal client in 1924, he says, “One of the great

benefits of continuity is that people bring things back to us.”

The stock of G. Sarti has shifted over the years, says

Claire Sarti, who runs the Paris firm alongside husband and founder Giovanni.

“Italian was always the focus,” she says. “We started with Italian furniture,

then gradually added paintings. Now it’s the opposite.” While Sarti carries a

few select furnishings, such as a richly decorated 17th-century curiosity

cabinet, paintings from the 14th and 15th centuries are a specialty.

Bartolomeo Manfredi that depicts the martyrdom of Saint Sebastian. Sarti

most. He shows Sebastian just before the arrows pierce him, a fleeting moment

when he asks God why he must die while at the same time accepting his fate.

This year, G. Sarti appeared at the

Maastricht fair for the first time since the late 1980s. “I still think there’s

a preference for Flemish and Dutch,” she says of the fair, “but there’s room for

Robert and Alice Landau of Landau Fine Art did not plan

on bringing 16 Picassos to the Maastricht fair this year. It just worked out

that way. “We got a phone call three days before we left for Art Basel Miami in

November, saying, ‘If you’re interested in seeing some Picassos that have never

been on the market before, get on a plane to Paris,’ and we did,” says Robert

Landau, president of the Montreal gallery that he operates with his wife of 34

They came home with five of the Spanish master’s later works, including

Fumeur, a striking 1969 painting of a smoker against a tobacco-colored

background. In the intervening months, the Landaus collected 11 more late

Picassos and brought them all to Maastricht, where they received an overwhelming

amount of attention from the media, attendees, and buyers, who took home Fumeur

“We work hard,” Landau says when explaining the gallery’s

success. “We’re honest, and we sell what we believe has good value for today.”

Keeping several Picassos in stock does not hurt, either.