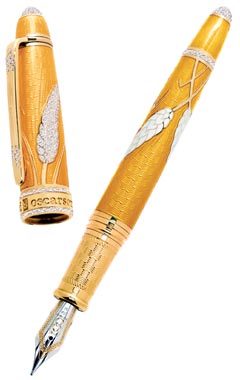 Collectors reap what this artisan penmaker has sown.

With designs that address function and aesthetics in equal measure, David Oscarson’s eponymous company stands out among the new wave of artisan pen manufacturers.

Oscarson’s fourth series is the Harvest Collection, which, unlike so many pen collections, was inspired by neither event nor anniversary, but by the Zeitgeist. The autumn theme, says Oscarson, alludes to a world climate in which people have become more contemplative. “Fall is a time of reflection for many of us, particularly in the Northern Hemisphere,” he explains. “The law of the harvest keeps our feet on the ground.”

The traditional shape of each Harvest pen’s barrel and its pastoral decoration are enhanced by three levels of guilloche engraving and two colors of translucent enamel. These techniques endow the pen with astonishing visual depth and brilliant color.

But the real joy comes in the writing. Oscarson emphasizes that his pens are more substantial than celluloid pens. “What most people notice is that they are also properly balanced,” he explains, “and the weight of the barrel is forward-balanced, resulting in extremely comfortable use.”

Fitted with an 18-karat gold nib tipped with iridium, the Harvest is available in five colors, most of which are autumnal hues. The standard sterling silver and enamel models ($4,000 for rollerballs and $4,200 for fountain pens) will be produced in quantities of 88 per color. The collection also includes a limited number of solid 18-karat gold pens decorated with varying amounts of pavé diamonds ($42,000 to $75,000).

John Pierpont Morgan has joined the company of Alexander the Great and Andrew Carnegie in Montblanc’s Patron of Art series. Morgan may be best known for uniting America with a rail network and establishing the first billion-dollar corporation, but he was also founder of the Morgan Library, which celebrates its 80th anniversary this year, and cofounder of the American Museum of Natural History and the Metropolitan Museum of Art.

In a nod to Morgan’s disparate pursuits, the Hommage à John Pierpont Morgan pen combines contrasting materials to reflect the dichotomy between industrialism and art: The cap is formed from carbon fiber, while the ribbed body is constructed of sterling silver or 18-karat gold. This design is also intended to represent Morgan’s ability to reconcile an appreciation for history with a visionary approach to business. As with earlier models in the Patron of Art series, the more precious gold version ($5,500) will be limited to 888 pieces, while 4,810 pieces will be produced in sterling silver ($1,850).

To construct a writing instrument worthy of the prancing horse logo, Ferrari enlisted its pen-making equivalent: Montegrappa—also Italian, and the leader in its field. The creative vision behind Ferrari’s first pen collection came from Giampiero Bodino, creative director for Montegrappa’s parent company Richemont, who has given the Montegrappa for Ferrari pen a streamlined, automotive look as well as novel features.

The pen’s sleek shape references a Ferrari’s curves, speed, and even handling. And reflecting Ferrari’s spirit of innovation, the pen features a newly designed cap-securing system and twin-ink cartridge holder. The total run of fountain pens ($1,500) and rollerballs ($1,300), in sterling silver and yellow or, of course, red, equals the typical annual production of Ferrari cars: 4,000. But the 18-karat gold and red lacquer flagship model ($4,550) is limited to a mere 150 pieces.

As its name suggests, Omas’ Harmonia Mundi (world harmony) represents a wish for peace. To make this plea, the Italian penmaker commissioned French artist Clara Halter, an especially poignant choice. From 1967 until 1977, Halter headed the literary magazine Elements, the first international publication to call for peace in the Middle East.

To convey world unity, Halter’s design features the words for peace in a number of languages engraved on the pen’s body and cap and protected by a clear outer shell. The shell is constructed of Plexiglas, and the body is made of titanium with 18-karat gold fittings, creating an appearance that is modern and robust. The titanium and yellow-gold version ($2,600) is limited to 950 pieces, while a more precious 18-karat white-gold edition ($11,000) is limited to 50 pieces.