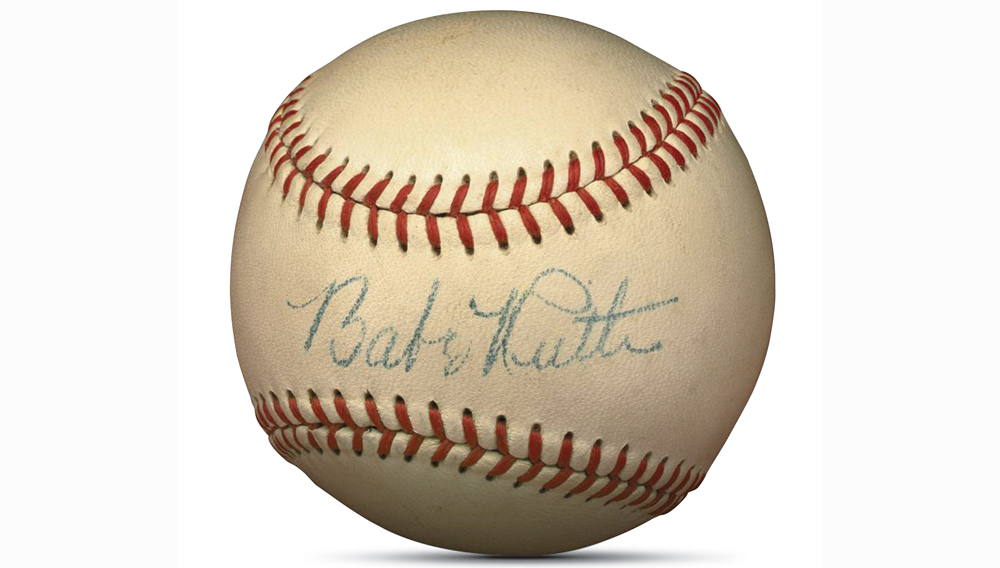 Bob Baffert, the Triple Crown–winning trainer of American Pharoah, grew up on a ranch in Nogales, Ariz., where watching televised baseball was more or less dictated by the family’s livestock. “Half the time our TV was out because some cow had knocked down the antenna,” Baffert says. Though the sometime baseball fan was not a Yankees follower in particular, the accomplishments of the legendary Babe Ruth fascinated him: Not only did the Sultan of Swat set a hitting-percentage record (.690) that stands today, but he had a larger-than-life personality that captivated a nation rebounding from the war to end all wars.

In June 2005, Baffert was leafing through a Sotheby’s/SCP Auctions catalog when a clean, cream-colored official American League baseball stopped him. There, in the heart of the sweet spot, was the loopy signature of the Babe himself. “It was a piece of baseball history,” Baffert says. “Just to think that he had touched the ball at one time felt like a connection.”

Baffert had attended countless Thoroughbred auctions, so vying for the baseball felt familiar. And he was not surprised when a competitive streak kicked in. At the end, when he had his $22,800 acquisition in hand, he realized he had dropped into a world he had long watched from afar. “I had always seen how everybody had something they collected,” says Baffert. “Now I had something.”

As soon as the ball arrived, Baffert carefully dismantled the 10-by-10-inch wooden case—“I had to unscrew it piece by piece”—and handed the 5 ounces of history to his wife, Jill, and infant son, Bode, who is now 10. “We bonded with the Babe,” he says. The ball is now tucked away in a safe, waiting for the day it becomes Bode’s.

Ten years ago, Baffert acted on his admiration for the greatest baseball player of all time. But he could not see into the future—to the summer of 2015 and the first Triple Crown win in 37 years, a victory that will perhaps establish Baffert as the greatest Thoroughbred trainer of all time.