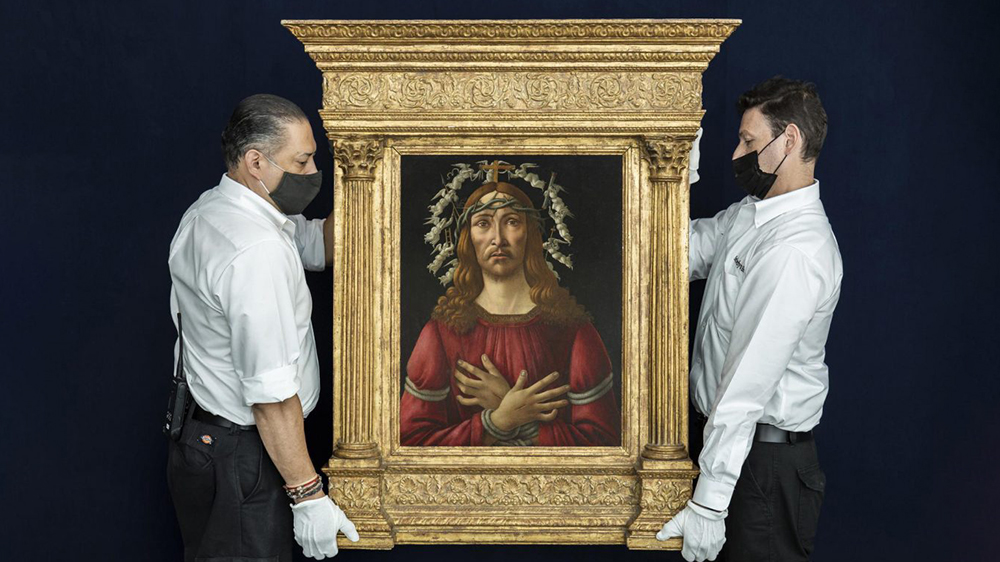 Following the record-setting $92 million sale of a Sandro Botticelli painting last year, Sotheby’s is bringing another 15th-century portrait by the Renaissance artist to the auction block. The house announced it will sell the painting, titled Man of Sorrows (ca. 1500), in January 2022 during an Old Masters evening sale at the house’s New York headquarters. The work will come to auction secured with a guarantee, and it is expected to achieve $40 million.

The sale of the $92 million work, a portrait titled Young Man Holding a Roundel, is credited with providing a jolt to the masterpiece market. Sotheby’s sale of Man of Sorrows similarly looks to breathe new life into a category that had been considered sleepy by many.

Man of Sorrows is a bust-length portrait of a thorn-crowned Christ, whose head is ringed by flying angels that form a halo. During the late 15th century and early 16th century, as Botticelli entered the final stages of his life, the artist’s faith intensified. He began producing religious portraits that deviated from his secular earlier works, most of which were paintings of Florentine nobles.

According to Christopher Apostle, head of Sotheby’s Old Master Paintings department in New York, there are only three known late-period portraits by Botticelli, making this one a rare work within the Renaissance artist’s oeuvre. “During the final decade of his life, Botticelli’s output was markedly different from his earlier career, which is often characterized as the epitome of Renaissance ideals of humanism and beauty,” Apostle said in a statement. The specialist described the work as a “remarkably realistic portrayal of Christ symbolizing his suffering and death.”

The painting is expected to fetch the second-highest price achieved for the artist at auction. It could outpace The Rockefeller Madonna (c. 16th century), which doubled its estimate when it sold for $10.4 million at Christie’s in 2013.

“To bring to auction a work by Botticelli of this quality is a major event in the world of Old Masters,” George Wachter, Sotheby’s chairman and co-world wide head of Old Masters, said a statement.

The work comes to sale from an American collection. It has not changed hands since it appeared at auction in 1963, when it sold for £10,000. According to Sotheby’s, historian Federico Zeri identified the painting as an autograph work by Botticelli when it was sold nearly half a century ago. It has been exhibited publicly only once in recent memory, in 2009, at a special exhibition at the Städel Museum in Frankfurt.

The Botticelli will be unveiled to the public at Sotheby’s Hong Kong outpost, then will go on tour to the auction house’s locations in Los Angeles, London, and Dubai before its sale in New York.