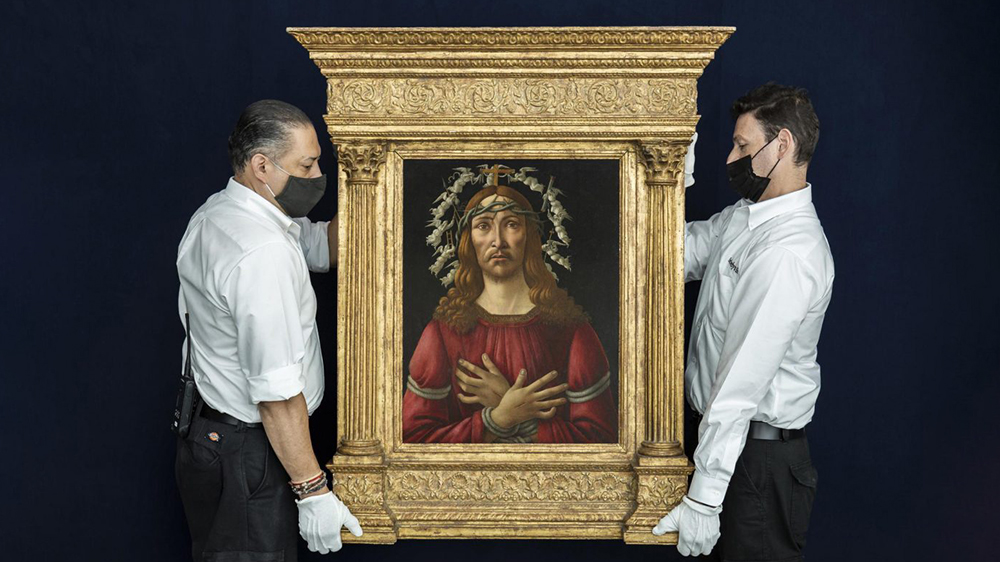 On Thursday morning in New York, during an old masters auction, Sotheby’s sold Sandro Botticelli’s Man of Sorrows (ca. 1500) for $45.5 million, making it the second most expensive work by the Italian Renaissance painter ever to be sold at auction.

After a total of three phone bidders entered the race to compete for the painting, two final bidders represented by Sotheby’s senior Old Master specialists Liz Lobkowicz and Christopher Apostle competed in a slow burn for the painting, bringing the hammer price up to $39.3 million. Secured with an irrevocable bid, the piece hammered just under its expectation of $40 million.

The price for the painting outpaced the Renaissance artist’s previous second highest auction, set for The Rockefeller Madonna (ca. 16th century), which sold for $10.4 million at Christie’s in 2013.

The house’s sale of another Botticelli portrait Young Man Holding a Roundel for $92 million is credited with providing a boost to the market for Old Master paintings. Sotheby’s sale of Man of Sorrows similarly looked to jolt the slumping category, marking a shift among auction houses, which are now placing focus on blue-chip sales of old-world trophies.

Man of Sorrows is a bust-length portrait of a thorn-crowned Christ, whose head is ringed by flying angels that form a halo. During the late 15th century and early 16th century, as Botticelli entered the final stages of his life, the artist’s faith intensified. He began producing religious portraits that deviated from his earlier secular works of Florentine nobles and scenes from mythology.

Works by Botticelli only rarely come to market, and only a handful still remain in private hands. Sold from an American collection, the work had not changed hands since it last appeared at auction in 1963, when it sold for £10,000. According to Sotheby’s, art historian Federico Zeri identified the painting as an authentic work by Botticelli when it was sold nearly half a century ago. It has been exhibited publicly only once in recent memory, in 2009, at a special exhibition at the Städel Museum in Frankfurt.

In a statement after the work’s sale, Christopher Apostle, the head of Sotheby’s Old Masters painting department, said: “Botticelli’s Man of Sorrows is one of the most potent, humbling works I have ever encountered. Though seemingly religious, it’s a painting of enormous humanity—a portrait of human suffering and spirituality that speaks a universal language. Today’s result is not only testament to its power and importance, but also to the timelessness of works painted some 500 years ago.”