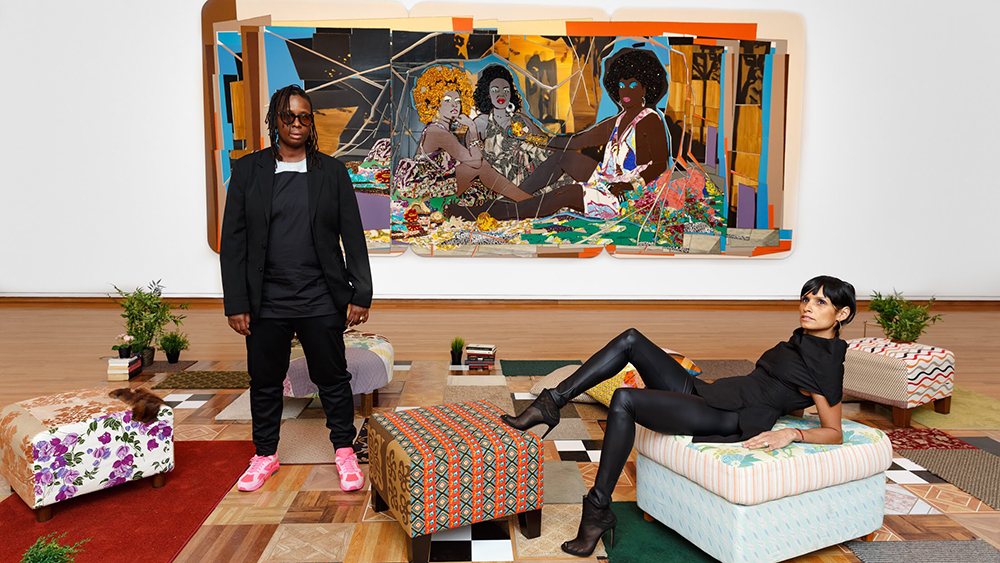 Mickalene Thomas’s 1970s-esque rec-room installations and loud portraits of self-assured women of color have long dazzled viewers, and her partner and muse, Racquel Chevremont, is a collector, curator and art adviser known for her own sharp eye. Together, calling themselves Deux Femmes Noires, they’re curating Brand New Heavies, a group exhibition of monumental works by three artists, all of them Black, female and rising stars.

“We knew off the bat we wanted it to be women,” says Chevremont. The couple turned to their running wish list of collaborators and, Thomas says, focused on those artists who could convert “that crazy idea in [their] sketchbook” into large-scale reality. Opening April 2 at Pioneer Works, a cavernous nonprofit cultural center in Brooklyn, and sponsored by Gucci and the Ford Foundation, the show will feature commissioned projects by Abigail DeVille, Rosa-Johan Uddoh and Xaviera Simmons.

In an uncanny coincidence, DeVille proposed building a 20-foot-tall rendition of the US Capitol long before the January 6 insurrection. Above the dome, she plans to hang liberty poles, but in this case, according to Chevremont, the centuries-old emblems of freedom will be charred and inverted. Inside the “Capitol” will be photos and videos of disquieting historical sites, such as Southern slave plantations. The effect, she says, will be a labyrinth of “historical trauma within a space that symbolizes the American dream and power.”

Chevremont says they approached Uddoh, a young British performance artist, in part because they were interested in a perspective on race relations from outside the US. “We often forget that across the Atlantic there are similar things happening,” says Thomas. “As Black bodies, we are experiencing similar things.” As part of her multimedia project, Uddoh created a sly take on Agatha Christie’s Murder on the Orient Express in which the famed detective Hercule Poirot is a Black man. The piece includes archival footage as well as extended passages of blank screen accompanied by narration, a technique the curators say is meant to prioritize the act of listening.

Simmons’s immersive environment, on the other hand, will include two videos that are both free of sound. One is about intimacy and sexuality, the other a drier, statistics-driven piece. Both will be housed in a structure built of clay spheres. Though her work is normally overtly political, with this piece Simmons wants to emphasize the healing “smell of the earth,” according to Chevremont. Adds Thomas, “All of these works allow people to feel something sensual and transformative.”