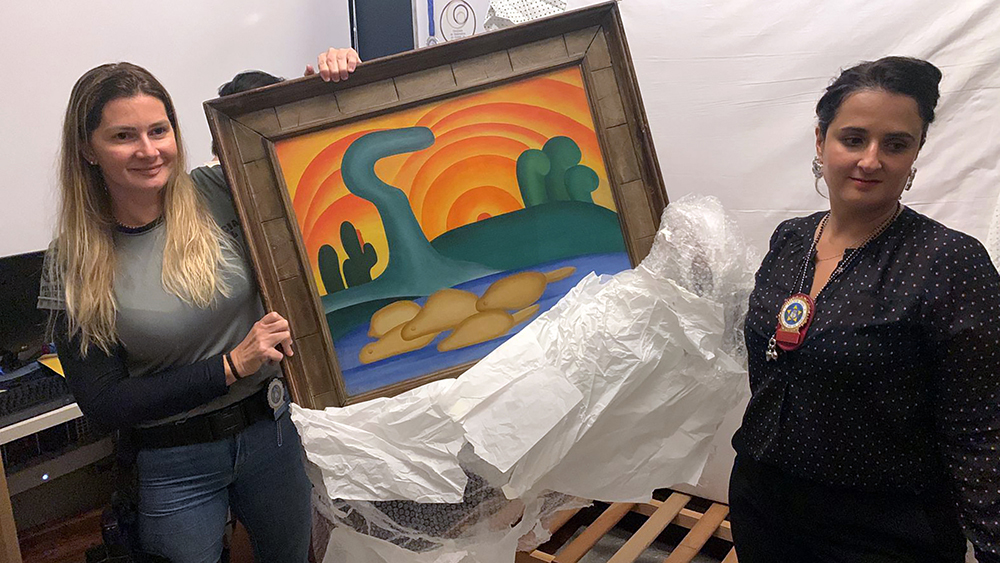 Police in Brazil found a major work by Tarsila do Amaral, one of the country’s most important modern artists, beneath a bed on Wednesday during an investigation into a group of stolen artworks.

The do Amaral painting is said to be worth 300 million reias, or $59.1 million. It is one of 16 paintings that police said were pilfered during an operation that ultimately involved 709 million reias ($139 million) worth of art, not counting the jewelry and cash that were also stolen.

According to local police statements, the theft was the result of an extended con masterminded by the daughter of a woman in Rio de Janeiro. Infobae identified the mother as Genevieve Boghici, an 82-year-old woman that was once married to Jean Boghici, a late Brazilian dealer who amassed a significant collection.

Using a clairvoyant, the daughter, who was not named, allegedly made Boghici believe she was sick and compelled her to make a series of payments during the course of a kind of “spiritual work” treatment involving a purported Afro-Brazilian priestess, police said.

Police said that Boghici eventually became suspicious of their ruse, and when she tried to stop making payments, she was confined to her home, threatened, beaten, and ultimately robbed. While Boghici was out of the house, her daughter allegedly relied on the help of accomplices to steal the paintings. Police claimed that the daughter had fired domestic workers in order to ensure that the heist would be possible.

The do Amaral painting, titled Sol Poente (Setting Sun), 1929, is an art-historically important work that features a succession of blob-shaped animals beneath a radiating sun and greenery. It’s a shining example of how do Amaral synthesized the aesthetics of European modernism with styles derived from Brazilian vernacular art. The painting figured in her acclaimed 2018 Museum of Modern Art retrospective.

Sol Poente was found beneath a bed in a beachside apartment in Ipanema. Video posted to Twitter Wednesday by the Brazilian outlet Journal o Dia appears to show investigators taking the painting out from beneath a bed frame and pulling away tatters of bubblewrap. “Fucking hell!” one person cries in Portuguese as the painting is revealed.

Police said that some of the other artworks stolen in the scheme  were already sold by an unnamed Brazilian art gallery. Among those works are two other paintings by do Amaral, as well as others by Emiliano di Cavalcanti, Alberto Guignard, and Cícero Dias. According to a list of the stolen works published by Globo, the three do Amaral paintings account for more than $100 million of the group’s total value.

Two of those works were paintings by Rubens Gerchman and Antonio Dias, each reportedly valued at $300,000. According to the Brazilian outlet Infobae, Eduardo F. Costantini, an Argentine businessman who ranks on the ARTnews Top 200 Collectors list, bought these works, as well as two other stolen ones, from Ricardo Camargo Gallery in São Paulo in 2021.

“According to provenance information, two of these works belonged to Boghici’s daughter and were bought in good faith and duly registered,” Costantini said in a statement.

ARTnews has reached out to Ricardo Camargo Gallery for comment.

Already on Wednesday, the police had arrested Boghici’s daughter and three others that they said were involved in the theft. In total, Brazilian police have placed 6 arrest warrants and 16 search and seizure warrants.