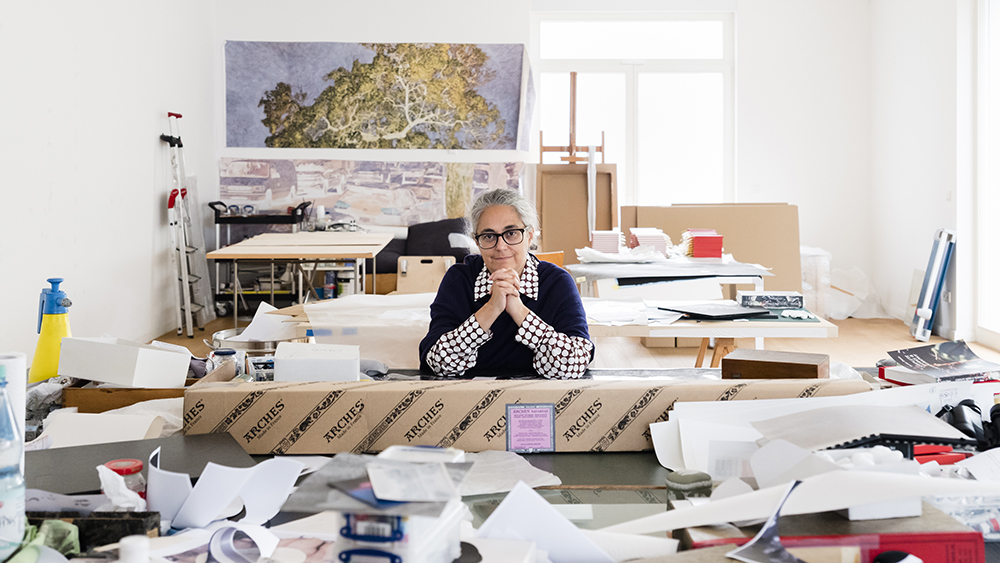 Hunkered down in her new Berlin studio during the pandemic, Tacita Dean completed two films, designed ballet sets and costumes, scrapped her initial plans for a museum commission (which Covid restrictions rendered undoable) and instead made 130 photographs of her postcard collection for it and, with a little help from a collaborator, created 100 largely handmade editions, each with 50 different objects—a total of 5,000 items—for a project titled Monet Hates Me. And the rest of us patted ourselves on the back for cleaning out a closet or two.

But Dean, who came to the forefront in the ’90s as a Young British Artist and crossed over into mainstream consciousness with her crusade to save film from digital obliteration, welcomed the no-excuses opportunity to work. For instance, she’d intended to make Monet since 2015, when she was an artist in residence at the Getty Research Institute in Los Angeles. “Had I not had the time [of lockdown],” says Dean, cozy in a poncho, her gray hair in a no-fuss bun, “it might have hung over me for the rest of my life.”

She had bucked convention at the Getty by foregoing a scholarly project in favor of “utterly random exploration.” The first time she wandered the archives, she says, “I pointed to a box, and they got it down. In it was the key to Auguste Rodin’s studio. That started the whole journey.”

“Monet Hates Me,” 2021, an exhibition in a box.  Thomas Meyer/Ostkreuz

Her take on the key is now “object number one” of the boxed trove, all inspired by treasures she discovered at the Getty. Another example is Piet Mondrian’s carte de visite, on which she crossed out his Paris address and wrote his New York one. “It’s very eccentric,” she says.

Equally quirky: All 50 items fit snugly in a box, though they’ll be removed for viewing as part of a solo exhibition at Marian Goodman Gallery in New York this month, along with the films and postcard photographs, the latter a study in form in tribute to modernist sculptor Barbara Hepworth. Also on view: pieces created in connection to The Dante Project, the Royal Ballet production based on the Divine Comedy premiering in London in October, including a 40-foot blackboard drawing playing on the dichotomies of black and white, positive and negative.

Dean had moved to LA not only for the Getty residency but also because she was alarmed that celluloid film was going the way of the typewriter. “I really needed to take the argument to save film to the heart of Hollywood,” she says, emphasizing that she is not anti-digital (and even made one of the earliest digital works, in 1996) but believes film is irreplaceable. “It’s a lot about poetry. Every film frame is different. It’s rich in its potential for mistakes that can be beautiful. It’s worth saving.”

Acclaimed for her subtle, atmospheric films—David Hockney passionately smoking cigarettes, Merce Cunningham sitting as still as his partner John Cage’s composition 4’33” is silent—Dean has lately been pushing the medium’s boundaries with innovations such as masking the camera’s aperture gate and reusing a roll of film to capture multiple images in the same frame. Dean undertakes the editing herself the old-fashioned way, cutting by hand. “You’re endlessly having to watch your thing all the way to get to the bit you want to change,” she says. “That constant spooling and unspooling, it’s a process and a ritual.”

Fortuitously, she had shot both new films in the show before leaving LA. (Brexit complicated her ability to remain while retaining the right to live in Germany, her longtime home.) The first, Pan Amicus, is a commission celebrating the Getty Center’s 20th anniversary. The second, One Hundred and Fifty Years of Painting, is more personal, documenting a dialogue between her friends Luchita Hurtado and Julie Mehretu. “I worked out that Luchita was going to be 100 and Julie was going to be 50 on the same day, so I proposed they have a conversation about painting, because they’re two amazingly brilliant, beautiful women and painters,” says Dean, who directed it months before Hurtado’s death at age 99.

Dean says she had been hopeful that film was “back from the brink” but sees the theater closures and streaming dominance brought on by the pandemic as perhaps insurmountable threats. “People really need to go to cinemas,” she says. “If we lose cinema, we’re going to lose something profound.”