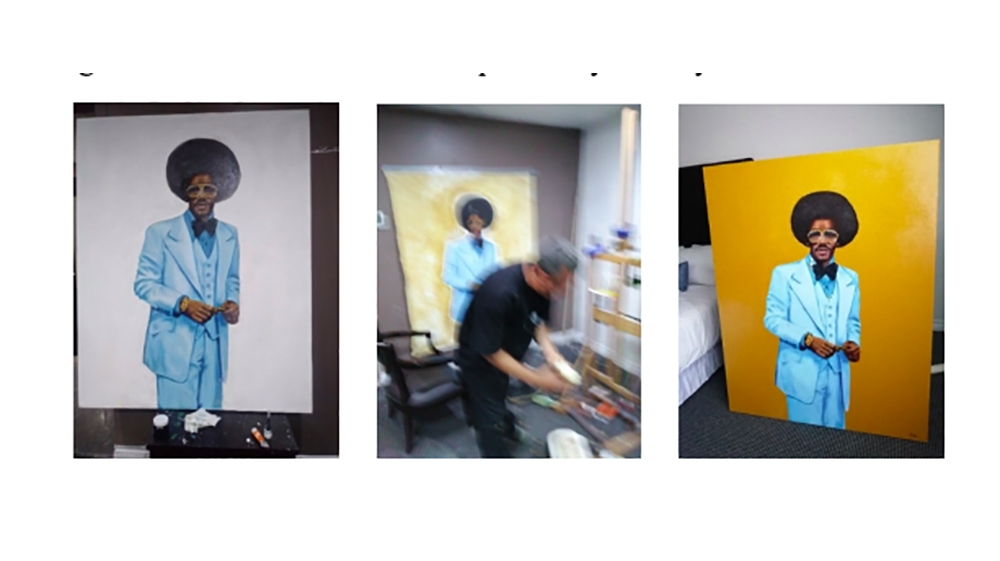 Courtesy of the US District of Southern California

Jason Harrington pleaded guilty to selling $1 million worth of forged artworks between 2018 and 2020, according to the Department of Justice.

Harrington sold forged works purporting to be by Canadian artist Richard Hambleton and acclaimed portraitist Barkley L. Hendricks to at least 15 buyers and galleries—all of whom remain unnamed. The resident of Escondido, California, fabricated provenance and related documents to legitimize works that he claimed had come into his possession.

According to court documents, FBI special agent Laura Wetterer compiled statements, text messages, and emails provided by the involved parties, along with pictures she found on Harrington’s Google account.

In September 2019, the court documents state, Harrington reached out to a New York-based gallery that focuses on work by Black artists to sell a piece in Barkley Hendricks’s style. He claimed he owned a never-before-seen Hendricks painting and sent pictures of the piece in addition to a story about how it came into his possession. Harrington wrote, “Story goes that Barkley Hendricks met my Uncle Larry at a garage sale that my uncle Larry was hosting in Mystic Connecticut or somewhere very close to Mystic in 1972. Barkley made a comment about the interesting clothing my uncle had been wearing and they started conversation. Barkley also commented on my uncles Jazz collection that my uncle had visible in the garage. They started conversation and shortly after they somehow made an agreement on a trade for the collection and the portrait.”

The unidentified gallery reached out to New York-based Jack Shainman Gallery, which has represented Hendricks since 2005 and has been responsible for the artist’s archive since his death in 2017. Jack Shainman director Elisabeth Sann verified that there was no known evidence of the painting’s existence.

“Barkley took absolutely meticulous records of all of his paintings,” Sann told ARTnews. “If it was not in his ledger, it is not a Barkley painting.” None of the gallery’s records showed anything close to the piece that Harrington had presented. Sann also recounted a change in the painting’s signature as the gallery continued to receive emails and images from Harrington. In one image the painting had been signed in either pencil or light charcoal, while a second image showed the same signature rendered in black paint. 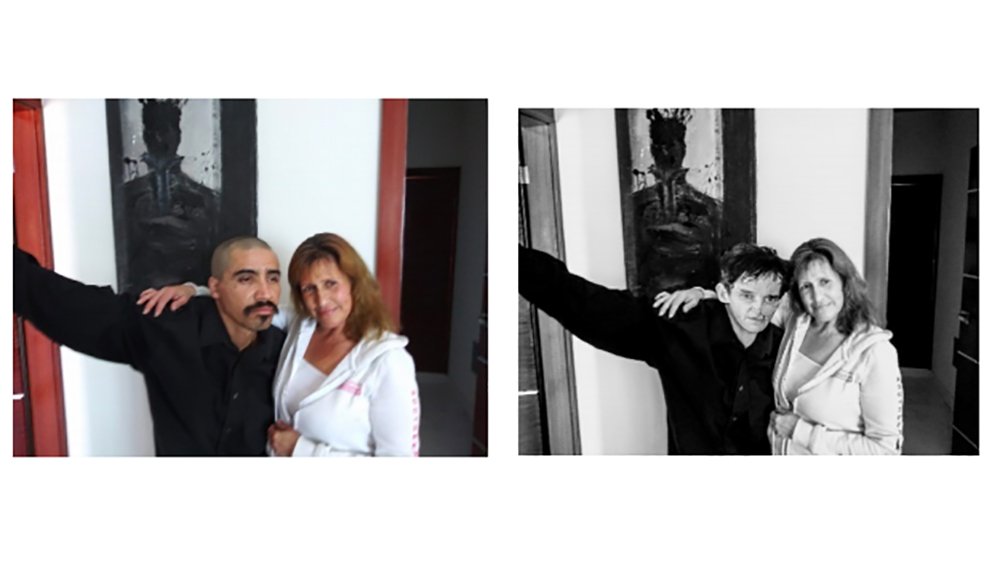 The picture on the left was used as the foundation for Harrington’s forgery of Richard Hambleton on the right.  Courtesy of the US District of Southern California

One of Sann’s colleagues accompanied Hendricks’s widow, Susan, to see the painting in person. It was immediately clear that the work wasn’t done in Hendricks’s hand. “It was a very ballsy move to try to forge [Hendricks’s] work,” Sann said. “He’s a contemporary master. Everything he did was so meticulous. The details are really hard to replicate. Once we saw [the painting] it was easily debunked.”

Wetterer’s investigation uncovered images of the forged Hendricks painting in progress throughout 2019. Among them was a screenshot of a man in a blue suit who is depicted in the painting—and can be found on the Wikipedia page for “1970s in fashion.”

Around the same time that Harrington was trying to sell the Hendricks painting, he had also reached out to two dealers to try to sell them works that he claimed were made by Hambleton. In both cases, Harrington shipped the forged Hambleton works to the dealers so that they could examine the pieces before making a purchase. The first dealer, along with an art collector who agreed to split the cost, wired Harrington close to $20,000 before growing suspicious about the painting’s authenticity.

Before seeing the piece Harrington had offered her, the second dealer had initially agreed to pay $5,000. But, once she received the painting, she had doubts about its provenance. Harrington claimed that his wife, a so-called Rachel Harrington, had been an on-and-off lover of Hambleton’s and that she had purchased the works from the artist at a discounted price.

When the second dealer asked to speak with Rachel over the phone, Harrington put her in touch with a woman who couldn’t speak English very well, even mispronouncing Greenwich Village. The dealer then confronted Harrington, who said he “[got] a Hispanic that didn’t know much English so she couldn’t give you much Information…” according to court documents. The dealer reported the incident to the authorities.

Wetterer also found images of Hambleton forgeries in progress along with doctored photographs of Hambleton meant to suggest that his associates had personal connections with the artist.

Harrington pleaded guilty and agreed to pay at least $1.12 million in restitution. Harrington is scheduled to appear in court for sentencing on October 22.