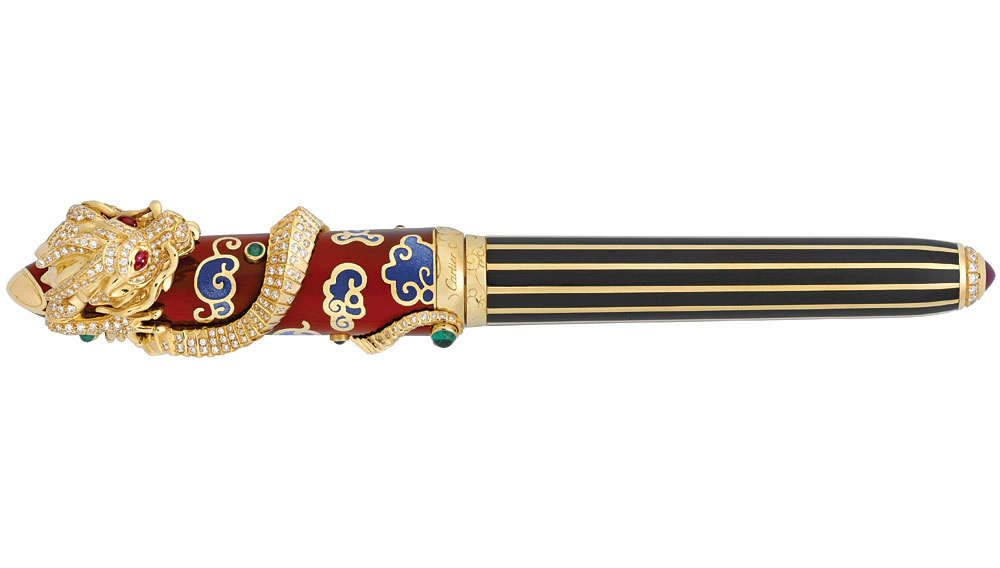 In the 1920s, Cartier created several collections of jewelry and accessories that united influences from the Art Deco and Orientalist design movements. In the decades since, the company has repeatedly revisited this striking hybrid style, most recently in 2008 with its Dragon Décor Exceptional collection of desk items, which include a limited-edition Red Dragon fountain pen in solid gold with lacquer in red, blue, and black. Cartier is offering eight of the $250,000 writing instruments, each set with 522 diamonds (totaling almost four carats), six emeralds, and two cabochon rubies that serve as the dragon’s eyes. A team of specialized artists, gem setters, and lacquerers devotes 100 hours to producing this functional objet d’art, which is available only by special order. A sculptor and polisher also spend considerable time shaping the pen’s rock-crystal cloud-motif stand.

On the pen, a sculpted, three-dimensional dragon coils around the cap, where images of clouds are rendered in blue lacquer. Symbols of luck and eternity in Chinese culture, clouds also appear on the pen’s nib, recalling a 1920s custom Cartier lipstick case with a similar motif. “Our designers are often inspired by the archives when creating for the future,” says Frédéric de Narp, Cartier’s president and CEO.

The Red Dragon pen, de Narp says, is more than just a stunning piece that sits on a desktop. “Writing with a fine pen offers a rare pleasure that is often denied in today’s high-tech society of BlackBerrys and iPhones. When people write something important—for example, a love letter or a contract signature—they want to write with an important object of beauty.”