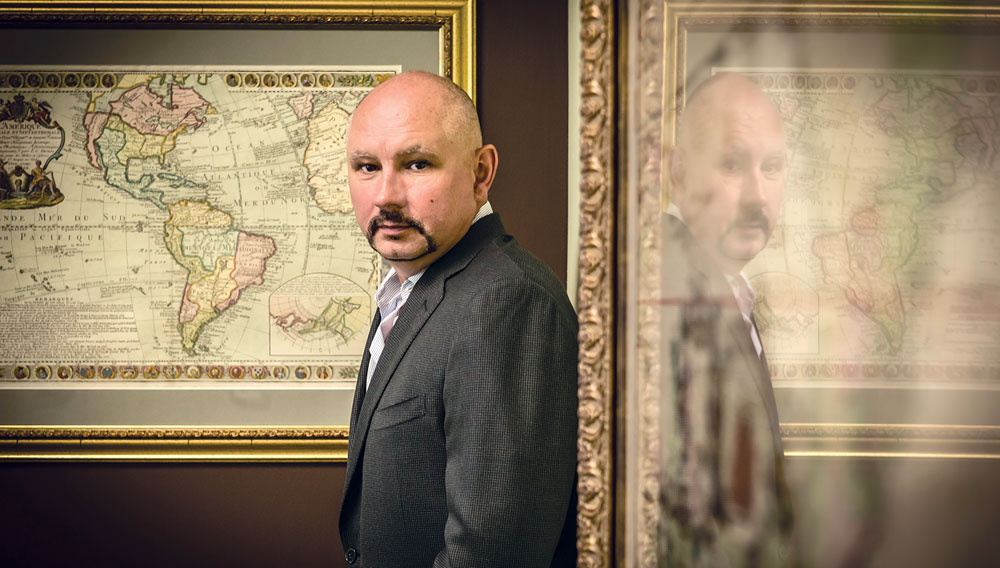 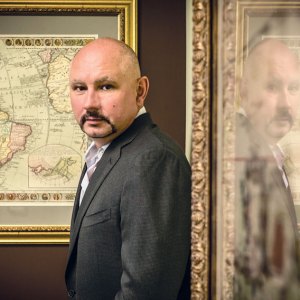 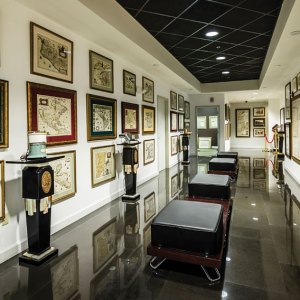 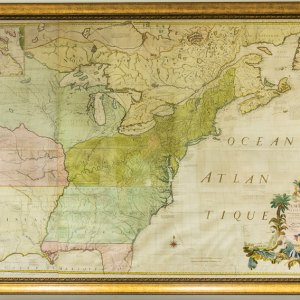 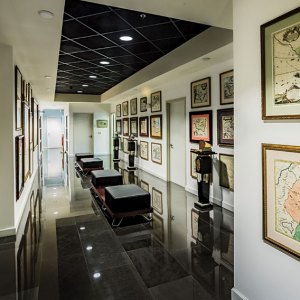 Walking down the hallways of the Legacy Companies’ headquarters in Fort Lauderdale, Fla., the firm’s president and CEO, Neal Asbury, passes dozens of antique American and Asian maps hanging on display. Later, when seated at his desk in his office, Asbury casts a glance at another map of Colonial America, this one commonly known as the Mitchell Map, a reference to its cartographer, John Mitchell, who drafted the piece in 1755. Measuring 70 inches long and 50 inches tall, the map is considered the most important in North American history. It was the most comprehensive map of the continent produced during the Colonial era and represented various territorial claims made by the French and British colonies. As Asbury notes, it’s the same map that started the French and Indian War and later settled the Revolutionary War. “Right now I’m looking at the same piece of paper that the American diplomats, the French, the British, and the Spanish were looking at when they created the United States,” he says. As Asbury explains, the Mitchell Map was the document used during the Treaty of Paris to determine the boundaries of the new American nation.

Though Asbury singles out this particular example, he could just as easily highlight any of the remaining 124 antiquarian maps that are displayed throughout his corporate headquarters, though even that number represents just a quarter of his complete collection. As the chief executive of a company dealing with international commerce, the 55-year-old finds that many of his maps take on an even greater relevance when hanging from the walls in the hallways, offices, and boardrooms of the building in which he works. In fact, it’s that personal connection that he feels has motivated him to build such an extensive and ever-growing collection.

sbury has spent his career advocating the merits of entrepreneurship and free enterprise, both as a published author and as the host of the nationally syndicated talk radio show Truth for America. He also spent more than two decades living in Asia and working as the sales director for a global trading company. So when Asbury discovered that examples of these historical maps were available for anyone to purchase, he jumped at the opportunity. After contacting a dealer in Monterey, Calif., who has since left the industry, Asbury gradually learned the basics of antique map collecting and shortly thereafter bought his first piece, a modest depiction of the eastern Mediterranean, which he paid $150 to acquire.

For Asbury, antiquarian maps represent a confluence of all the various interests that he enjoys. “I’m passionate about the arts,” he says, noting his performing arts degree, “and these are works of art, all done by hand. The information that was on these pieces of paper was gathered by people like me. The cartographers were global traders, people out in the world looking for opportunities. I’m just the latest iteration, traveling around the world and trying to find my own entrepreneurial successes. These were my predecessors, so I feel some connection.”

During the four years that he studied at Rowan University in New Jersey, Asbury shared a room with an art student whose preferred medium was steel etchings, and Asbury often watched in awe as his roommate operated with a deft hand and fine tools to create elaborate prints. Years later, as Asbury educated himself on the history of antiquated maps and learned of the printing methods necessary to produce them, he developed an even stronger connection to these collectibles. “I watched how he worked over those four years and I was fascinated to learn that these maps were done the same way using copper plates, which only produced 100 copies,” he says. “And it dawned on me that I wasn’t holding a map; I was holding a piece of art.”

Those factors drew Asbury deeper into the world of collectible, antique maps. But his approach intensified once he discovered that he could use his entrepreneurial skills not only to further his collection but also to appreciate his assets.

ith so many maps on the market, and so many subcategories in which to delve, a novice collector might feel overwhelmed as to where to start.  A new collector might also assume that any old map is destined to increase in value, the older it gets. Such is not the case. Asbury advises new collectors to first focus on a general category that they find interesting. But from there, the way Asbury sees it, the details make all the difference. “As a strategy, it’s finding a period in history and putting a collection together that you know will continue to be fascinating to people who have money to invest,” he says. “Maps on China, I think, are incredible investments, because the nouveau riche in China are going to go back to their history and they’re going to find it in ancient maps. You’ve got a million millionaires that are going to be chasing these documents.

“In the last five years, the good stuff has gone through the roof and it’s still undervalued,” he adds. “It still has a lot of room to appreciate because the Chinese are going to want to discover and collect their history, and it’s going to come back to these documents. If you know there are 1.5 billion Chinese and 120 million Japanese, you know there’s going to be a big market for this stuff someday. As their wealth grows, their appetites for the stuff will grow with it.”

Historical maps of China and the Far East are one of the two categories that Asbury collects—the other being Colonial-era maps, which he collects because of his heritage and due to his fascination with American capitalism. While he believes there is a budding market for Far East maps (which no doubt skews his interest), those maps also connect to Asbury’s past—when he lived and worked in Asia early in his career. That, he insists, plays a huge role in his desire to focus on them.

Looking back on his early foray in map collecting, Asbury realizes that he grossly overpaid for items, and while that’s a lesson that most collectors can expect to learn as they advance through the hobby, Asbury says the damage can be minimized by a long analysis of the market and its trends. “You have to look at 20,000 pieces and read about them and understand them and see those pieces sold three or four different times,” he says. “It takes time.”

Asbury also learned that sometimes, with certain antiquated maps, what you see isn’t always what you get. Though many historical maps are printed on parchment that’s hundreds of years old, he says that many of them can be cleaned and restored, which can drastically increase their value. The fact that many maps will be offered for sale through auctions and other means in unrestored condition simply reflects hobbyists’ reluctance to risk permanently damaging a historical relic. Fortunately for Asbury, he formed a relationship with a nearby art restoration expert who can help him not only improve a new acquisition, but also assess which pieces can be restored. “I can look at something and buy it not because of what it looks like today but because I know what it could look like and what its value can be,” Asbury says. “Some things that you buy that are beat up, you don’t touch them because they’re sacred. But you’re going to find stuff in all kinds of condition and you just have to have a little imagination to see how they can be brought back to their former glory.”

When it comes to determining what to buy, a collector can never go wrong acquiring a foundation map. According to Asbury, when explorers trekked into uncharted territories around the globe during the centuries of major discovery, what they uncovered would be communicated to the rest of the world via a map. And once one cartographer documented a new discovery, all other cartographers followed suit. A foundation map is that first map—the one that sets a trend. “Foundation maps are more valuable because they set in place the thought of the period,” Asbury says. Some even confirmed fallacies and heresy, and such factual inaccuracies further increase a map’s value. And that leads to the appeal of a map that tells a story.

To appreciate antiquarian maps for what they are and what they represent—not just what they’re worth—a collector must first possess an interest and an appreciation for history. To hear Asbury rattle off examples of maps he owns and others that he would love to own, it’s evident that he has a passion for history, specifically for the events that influenced the molding of the world in which we now live. There’s the map that chronicles the independent country of Texas, the one that suggests that the land that would someday become the state of California was really an island, and then there’s the one that immortalizes the state of Franklin, an area of land that is now eastern Tennessee and western North Carolina that was proposed and named in honor of Benjamin Franklin, and was denied congressional ratification by one vote. “People don’t realize that we almost had 51 states,” Asbury says. “So many maps have really incredible stories behind them. If you know who the cartographer was, and if you know about the expedition, and the explorer, and what was happening politically between the balances of power, and the building and decline of powers, it makes for very fascinating storytelling.

“In the 1500s, 1600s, and 1700s, there was a lot of mythical stuff that found its way onto a map,” he continues. “You could look at maps of Africa, and the whole interior of Africa is full of symbols of towns and villages.” Explorers would relay tales from their journeys, and, as Asbury explains, “the cartographers would take this information very seriously and it would end up on these maps, but these places never existed. To me, that makes the earlier maps much more fascinating and it makes them more pieces of art.”

The most that Asbury has paid for a map to date is $30,000, and it was for a piece published in 1715 that depicted the northeast American colonies. The significance of the map, according to Asbury, is that it depicts a shift of European focus away from Latin and South American mining and the conquest of the Incas and Aztecs, and toward the economic opportunities through trade in North America. While that may be the most Asbury has paid thus far, he says that he does have his eye on some pieces that are five times that amount.

Asbury’s collection has grown steadily in the last six to seven years, to the point that he’s now finishing a 4,000-square-foot addition to his home, which will allow him the space to create a museum-like showroom for the display of an additional 150 maps. Still, he doesn’t have enough wall space for his entire collection, but that won’t stop him from acquiring additional pieces. What Asbury buys next is still uncertain, but he feels more confident about where he’ll find it. “Once in a while you hear of these things being discovered in a library,” he says. “Those are wild stories, but for me, that’s never happened and I don’t really anticipate it. If you think you’re going to find a great map on eBay sold for a fraction of what it’s worth, you’re never going to have a collection. But if you’re tenacious, you can buy them at auction and from dealers and see great value a few years later; you just have to be a good buyer.”