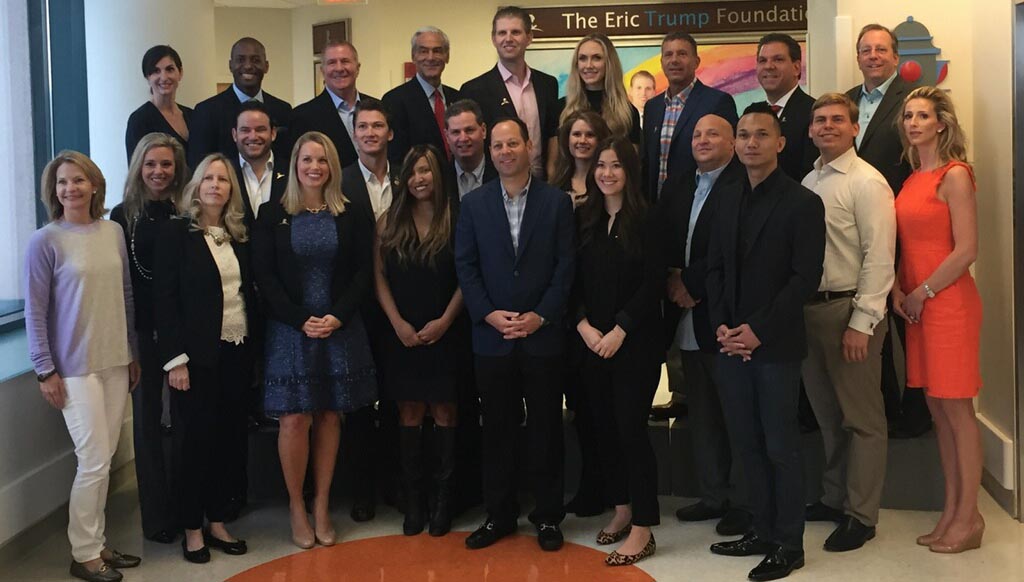 NEW YORK – April 21, 2016 – TRUMP HOTELS is thrilled to announce that its luxury properties, in partnership with The Eric Trump Foundation (ETF), raised an astounding $609,213 in 2015 through its participation in the St. Jude Thanks and Giving® campaign to benefit St. Jude Children’s Research Hospital®. TRUMP HOTELS’ property executives and associates, inspired by the commitment of ETF to support the important work of St. Jude, are dedicated to helping children battling cancer and other life-threatening diseases.

The property teams have enthusiastically designed initiatives over the past six years to create awareness and raise funds for the lifesaving research and treatment performed at St. Jude, backing ETF’s pledge of support. The 2015 company-wide effort – a spirited and friendly competition among the luxury brand’s resorts and hotels – raised more than triple the amount over the previous year and nearly doubled the goal set for the campaign.

“I am grateful to our guests for their generosity and proud of our associates for their unwavering dedication to supporting the children of St. Jude Children’s Research Hospital,” said Eric Trump, Executive Vice President of Development and Acquisitions at The Trump Organization and ETF founder.  “All shared in The Eric Trump Foundation’s vigorous commitment to St. Jude by raising a staggering amount of money throughout the year. I am beyond thrilled that we nearly doubled our goal, in addition to more than tripled our 2014 number. This is an incredible accomplishment.”

The St Jude Thanks and Giving campaign unites celebrities, media, retail and corporate partners in asking consumers to donate while they shop to support the lifesaving mission of St. Jude. TRUMP HOTELS’ participation in the campaign will significantly augment the contributions of ETF, which recently pledged to raise $20 million for St. Jude. The Foundation has grown into one of the largest private charities in the United States, and The Chronicle of Philanthropy recently recognized it as one of the top 10 health care donors in 2015 for its generous $20-million pledge to help fund the Eric Trump Foundation Surgery and ICU Center, which is a state-of-the-art intensive care unit and pediatric surgical center that opened on the St. Jude campus a year ago.

During TRUMP HOTELS’ collective effort to support ETF’s commitment to St. Jude, excitement reached a fever pitch as property teams encouraged partners, associates, and guests to contribute to St. Jude through a range of initiatives – from beach bags with Trump logo available for guest purchase to movie nights for associates.  All TRUMP HOTELS properties made charitable gifts to St. Jude when guests booked Black Friday and Giving Tuesday Suite Special packages during the holiday season.  Guests also had the opportunity to donate through ornament and stuffed animal purchases, or upon check out.  In addition, TRUMP HOTELS’ associates performed above and beyond their professional responsibilities at TRUMP HOTELS by organizing activities such as bake sales with all proceeds going to support ETF’s generous commitment to St. Jude Children’s Research Hospital.

The 2015 top three fundraising properties are:

Trump National Doral® Miami, raising$154,774, the most of all the brand’s hotels or resorts in 2015.   In addition to raising the most funds and being awarded the “2015 St. Jude Champion Trophy,” the Trump Doral team was recognized as the “Most Improved Player” for increasing its 2014 total by more than $140,000.  Various Trump Doral departments came up with unique ways to raise funds including the spa offering a St. Jude’s Signature manicure & pedicure and donating ten percent of the proceeds to the organization, front office associates holding a car wash, and the food and beverage team offering keep-the-change programs at some of the hotel’s dining venues.  Also, for a major client event, Trump Doral created a “St. Jude Giving Tree” bearing complimentary overnight stays.  Event attendees had a chance to purchase a number that hung on The Giving Tree during registration, receptions, and breaks, and it was matched with a certificate for a two- to three-night hotel stay.  The Trump Doral client generously matched the attendees’ donations, and the combined effort raised more than $15,000 for St. Jude.

Trump International Hotel & Tower® Chicago, with $149,484 raised.  ETF acknowledged the Trump Chicago team for setting the standard and passionately supporting the initiative over the years with events such as a St. Jude Walk/Run, Reindeer on the River, and Bourbon and Beer Tasting.  Trump Chicago also collected donations for St. Jude on the spectacular Gingerbread Express – a special elevator to two Michelin-starred Sixteen that is decked out every holiday season with more than 1,100 gingerbread bricks, candy canes and other concoctions created by Executive Pastry Chef Aya Fukai and team.

Trump Turnberry, a Luxury Collection Resort, Scotland, with $89,282 raised throughout the year-long campaign which is especially notable as the property was undergoing renovations toward the end of 2015.  Trump Turnberry supported St. Jude with events such as a Gala Dinner and a Ladies Luncheon.

About The Eric Trump Foundation

The Eric Trump Foundation (ETF) is dedicated to raising money for children battling life-threatening diseases at St. Jude Children’s Research Hospital in Memphis, Tennessee.  Eric Trump, executive vice president of development and acquisitions at The Trump Organization, founded the nonprofit organization in 2006.  To date, the Foundation has raised more than $10 million toward its $20 million pledge to St. Jude and has grown into one of the largest private charities in the country. Through direct personal involvement and financial support, ETF strives to advance the medical and emotional needs of terminally ill children while ensuring that monetary donations translate into significant results at St. Jude. Using only Trump-owned and -operated facilities, full-time volunteers, donated food and beverage products, and pro-bono celebrity performers, ETF maintains one of the lowest expense ratios of any charity in the world. http://www.EricTrumpFoundation.com

St. Jude Children’s Research Hospital is leading the way the world understands, treats and defeats childhood cancer and other life-threatening diseases. It is the only National Cancer Institute-designated Comprehensive Cancer Center devoted solely to children. Treatments invented at St. Jude have helped push the overall childhood cancer survival rate from 20 percent to 80 percent since the hospital opened more than 50 years ago. St. Jude is working to drive the overall survival rate for childhood cancer to 90 percent, and we won’t stop until no child dies from cancer. St. Jude freely shares the discoveries it makes, and every child saved at St. Jude means doctors and scientists worldwide can use that knowledge to save thousands more children. Families never receive a bill from St. Jude for treatment, travel, housing or food – because all a family should worry about is helping their child live. Join the St. Jude mission by visiting stjude.org, liking St. Jude on Facebook (facebook.com/stjude) and following us on Twitter (@stjude).