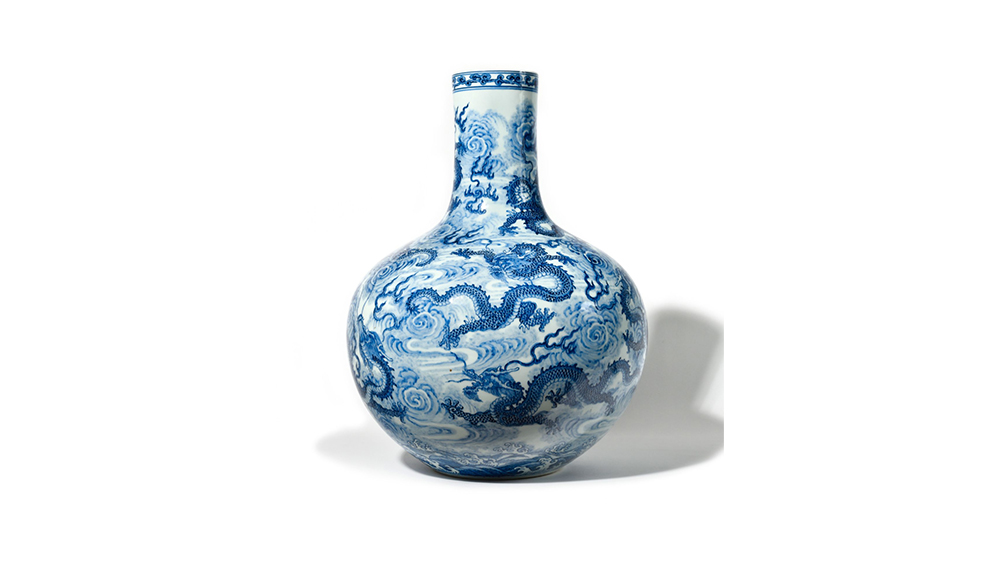 A Chinese vase described as “quite ordinary” turned out to be anything but after selling for almost 4,000 times its estimated value over the weekend.

Originally expected to fetch between 1,500 and 2,000 euros ($1,470-$1,960), the Tianqiuping-style porcelain vase sold for more than 9 million euros ($8.8 million), with sellers fees, at the Osenat auction house in Fontainebleau, France on Saturday. While the house thought it was offering a relatively mundane 20th century vase, the 30 bidders from mainland China believed Osenat had a rare 18th century artifact on its hands.

The blue-and-white vase measures 21 x 16 inches with a spherical body and long cylindrical neck. It’s also decorated with swirling clouds and nine ferocious dragons to boot. It was brought to auction by the daughter of the former owner, Osenat president Jean-Pierre Osenat told The Guardian. Reportedly, she lives abroad and didn’t see the vase before arranging for it to be taken from her mother’s home in Brittany, northwestern France.

“She inherited it from her mother who in turn inherited it from her mother who was a big Paris collector in the last century,” Osenat says. The vase was in the former owner’s possession for 30 years and according to a valuation expert, it dates from the 20th century—deeming it not rare. But that didn’t stop 300 to 400 people from expressing interest in bidding on the piece.

“From the moment the catalogue was published we saw there was enormous interest with more and more Chinese people coming to see the vase,” says Cédric Laborde, an Osenat director. Eventually, the auction house limited the number of bidders down to 30, all of which had to pay a deposit to bid on the vase.

By Saturday, the bidding frenzy kicked off with 15 telephone bidders and 15 collectors in house driving up the price. Osenat claims 10 people were still bidding after the price passed the 5 million euro mark. The vase eventually was sold to an unidentified Chinese buyer for the grand total of 9.121 million euros ($9.02 million), including fees.

“Our expert still thinks it’s not old,” states Laborde. In fact, Osenat’s expert claims if the vase had been 200 years older it would have been extremely rare—presumably without a doubt. Despite this, it’s clear that the mainly Chinese bidders for the piece saw value in the lot. “I have faith in the hammer, which is to say that I think the law of supply and demand determines the market price,” Osenat told CNN. “The view of an expert can’t outweigh that of 300 people.”