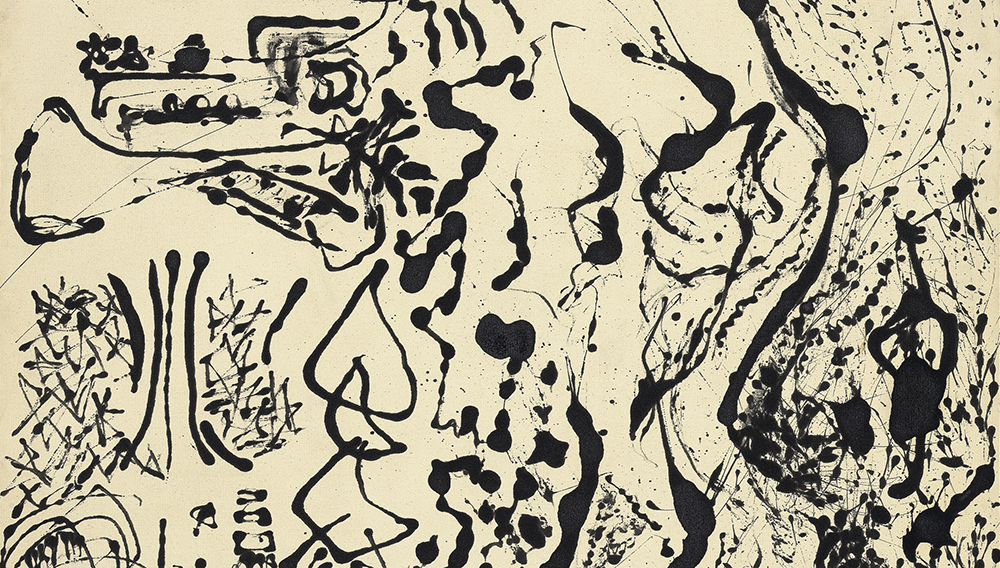 In August of 1949, the subtitle of a Life magazine story on the painter Jackson Pollock asked, “Is he the greatest living painter in the United States?” Over the previous few years, Pollock had gained notoriety—even infamy—for his “drip” technique and the paintings he produced with it. (In 1956, about six months before his death, Time magazine would pin on him the memorable sobriquet of “Jack the Dripper.”) And then, at the height of his fame, he swerved from the path that had brought him such notice, embarking on a more minimal series of pieces known as his black-enamel paintings. In these works, Pollock abandoned color altogether, along with the sense of solidity and all-over composition that characterized much of his previous output. In their place he substituted an automatic-drawing approach using only black enamel on unprimed canvas.

On May 13, at its Post-War and Contemporary Art Evening Sale in New York, Christie’s will offer one of the black-enamel masterpieces from 1951, Number 5 (Elegant Lady). The work has an impressive and well-documented exhibition history dating to 1956, when the New York gallerist and dealer Martha Jackson presented it in the opening show at her new location. She had acquired it from Pollock, with another painting from the same year, in a trade for her car (the vehicle he eventually died driving). In 1980, it was purchased by a German energy company that came to form part of what is now E.ON, one of the world’s largest investor-owned power and gas companies. That buy was the foundation of E.ON’s notable art collection, which itself has enabled Germany’s largest public-private cultural partnership, supporting Düsseldorf’s Museum Kunstpalast. The sale of Number 5, which is expected to bring $15 to $20 million, will help to continue this work. The estimate may not approach Christie’s world auction record for a Pollock—last year’s version of this same sale saw Number 19, from 1948, go for more than $58 million—but is still a significant improvement over the $10,000 ceiling that Pollock himself never cleared for any painting during his lifetime.

Among the pieces also set to cross the block are Andy Warhol’s White Marilyn, estimated at $12 to $18 million, from his first-ever solo exhibition in 1962; and a large untitled canvas by Jean-Michel Basquiat from 1981, estimated at $20 to $30 million, making another follow-up to a record from last year’s sale (when the artist’s Dustheads went for almost $49 million). (www.christies.com)