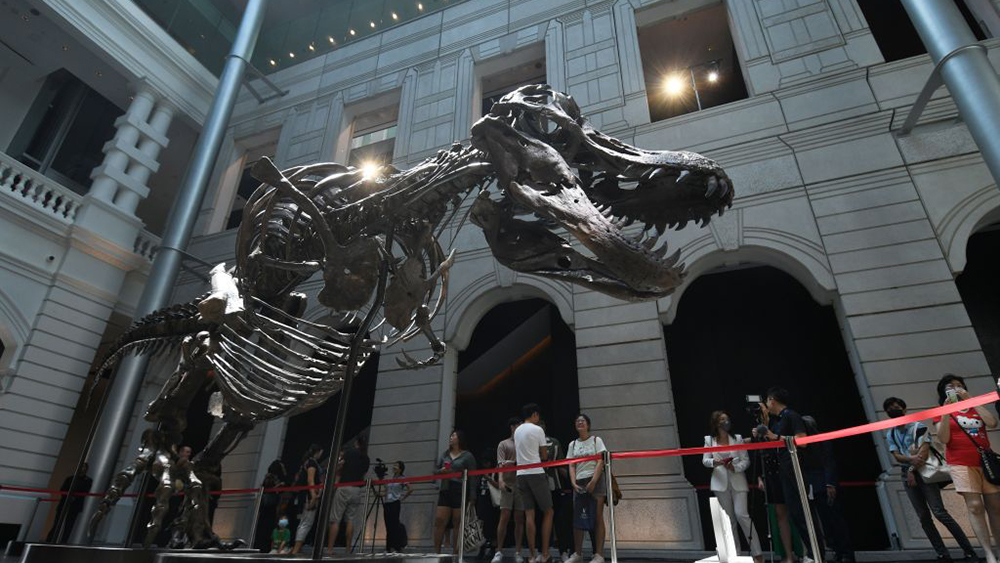 Photo by Then Chih Wey/Xinhua via Getty Images

Christie’s has withdrawn the sale of a Tyrannosaurus rex skeleton planned for auction in Hong Kong over concerns over how many of its bones are replicas, along with copyright concerns from a notable fossil company.

The auction for the T. rex nicknamed “Shen,” which was scheduled for November 30, was expected to fetch $15 million to $20 million. However, the lot was withdrawn after questions were sent to Christie’s from the Black Hills Institute of Geological Research fossil company about similarities between Shen’s bones and those of another high-profile T. rex skeleton sold by the auction house in 2020.

When Christie’s auctioned off the T. rex “Stan” for a record $31.8 million in 2020, Black Hills retained intellectual property rights. The legal agreement allowed the company to continue to sell approximately 100 painted casts of the skeleton made of polyurethane for $120,000, including to the Smithsonian National Museum of Natural History.

The president of Black Hills, Peter Larson, told the New York Times Sunday that he noticed Shen’s skull looked similar to Stan’s skull after seeing photos, including unique details like holes in the lower left jaw.

Larson said he was concerned the buyer of Shen would then would have the right to produce and sell their own skeleton replicas. A line in the news release about Shen said it was being “auctioned with full rights and all soft assets relating to it”.

Christie’s later added notes to the online description of Shen about the source of its replica bones being created and purchased by Black Hills Institute. The changes were made after the fossil company’s lawyer, Luke Santangelo, contacted the auction house in the fall with concerns about the lack of disclosure that the specimen being sold included casts of Stan’s bones.

It is normal for dinosaur skeletons to be incomplete and require casts or reconstructions of other skeletons to make up for missing or damaged original bones.

Fossil auction sales like Stan have become increasingly popular and lucrative. In May of this year, Christie’s sold the remains of a Deinonychus antirrhopus raptor—the kind made popular in the blockbuster movie Jurassic Park—for $12.4 million. However, there are growing concerns from some paleontologists that sales like the one Christie’s planned for Hong Kong could continue to make scientifically important natural history specimens privately owned and inaccessible to researchers.