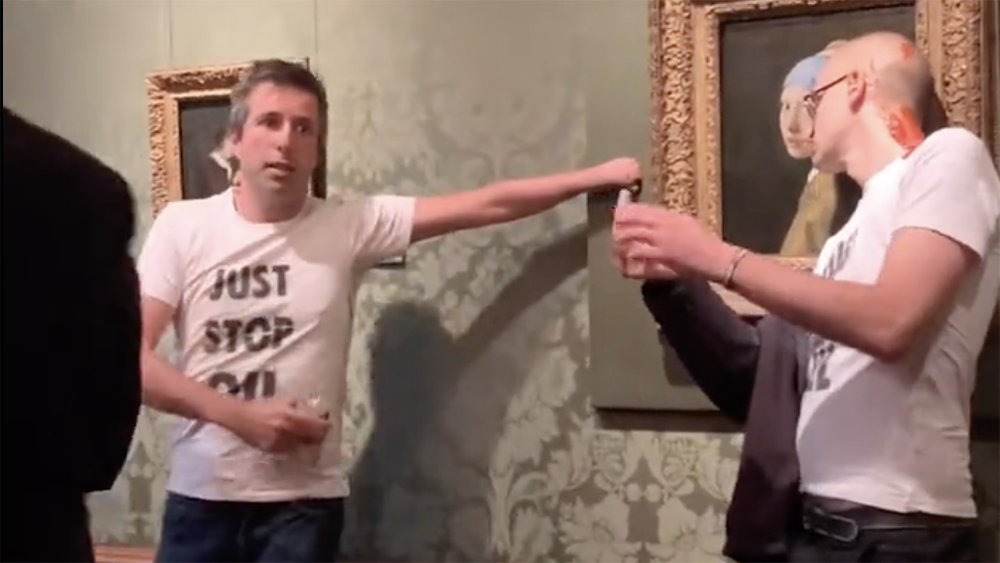 Two activists in Belgium have been sentenced to two months in prison for a protest in which one person glued their hand to the wall next to Johannes Vermeer’s Girl with a Pearl Earring while another attempted to paste his head to the painting. The painting was unharmed.

According to the Guardian, the public prosecutor had requested four months in prison with two months suspended, saying in a hearing, “An artwork hanging there for all of us to enjoy has been smeared by defendants who felt their message took precedence over everything else.”

In the end, the judge sentenced the protestors to two months of jail time, with one month suspended, saying that she did not want to discourage protest. A third protestor who did not want their trial fast tracked is still awaiting sentencing.

The protestors appear to not be directly affiliated with Just Stop Oil, but they wore T-shirts with the group’s name written on them.

“The media likes to portray activists as hysterical but what the Belgian courts have done is madness,” said Simon Bramwell, cofounder of global environmental activist group Extinction Rebellion, which has joined Just Stop Oil protestors in various actions. “They’re shooting the messenger.”

In recent months, those in opposition to the climate protests have gone on news segments, or to court, to justify claims that the protestors are, in a supposedly undemocratic fashion, deciding that they have the right to inconvenience others.

“I’ll be blunt here. Ultimately, they’re not jailing protesters in Belgium because for the liberty of the individual or what have you,” said Bramwell. “They’re doing this because the government is scared, and above all, because petrochemical companies are scared. They’re making record profits and they don’t want anyone getting in the way of that. You’ve got to think about this in the long term: everyone’s liberty and freedom is on the line.”

The sentencing is the first time a protestor who has been engaged in museum eco-protests in which glueing oneself to a work or throwing a liquid at it has been given a formal jail sentence for their actions. Bramwell said that while U.K. protestors have been held in jails for months awaiting sentences, none have been decided yet.

In a statement, a representative for Just Stop Oil said, “This was not one of Just Stop Oil’s actions though we absolutely stand behind the people that did this.  Anyone who peacefully resists the genocidal plans of global governments to drill for more oil and gas has our love and respect. We applaud them.”

The spokesperson added, “Shocking though it may have appeared, no-one and no art was harmed during this action. Whereas if we don’t stop the harm caused by burning fossil fuels, there will be no one left to gaze on humanity’s great masterpieces.”