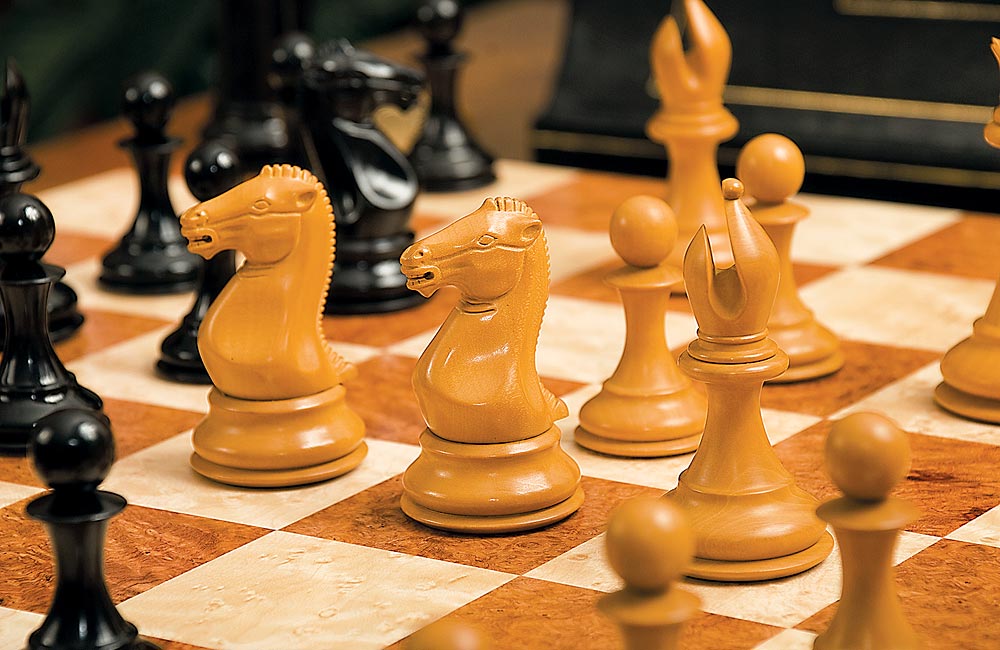 “A pattern combining elegance and solidity to a degree hitherto unknown,” read the advertisement in the Illustrated London News for the Staunton chess set upon its introduction in 1849.

In one of history’s first celebrity endorsements, Howard Staunton—a British chess master and Shakespearean scholar—lent his name to the chessmen released by the game company Jaques of London. The company’s historic design soon became the archetype for chess sets around the world.

The Staunton pieces of 1849 were as handsome as they were practical. Their forms suggested classical columns resting on pediments and topped by identifiable emblems—the bishop’s miter, the king’s crown, the rook’s crenellation. The knights echoed the stallion heads of the Elgin Marbles that originally graced the Parthenon. Designers added wide bases and weights to keep the pieces from toppling during play.

In the 1980s, international master Frank Camaratta grew concerned that fine Staunton sets were no longer being produced. “You just couldn’t find a decent wooden chess set,” he says. “The workmanship was terrible.” Camaratta—a retired aerospace engineer, a collector of antique chess sets, and an authority on the history of the Staunton design—possessed the credentials to revive the set in its most luxurious form. In 1990 he founded the House of Staunton and set about doing so.

Having produced hundreds of high-end sets over the years, the Alabama-based House of Staunton has returned to the original design as the inspiration for its Golden Collector series, which replicates the first Staunton pieces down to the smallest detail and is limited to 50 numbered sets.

Craftsmen at the House of Staunton form each piece from traditional boxwood and pure ebony. Expert carvers lavish particular attention on re-creating the intricate details of the knights, whose production represents half the cost of any high-end Staunton set. An embossed leather pad cushions the base of each piece, while the finish duplicates the patina of the originals. The set includes a handcrafted board with alternating squares of solid red amboyna burl and bird’s-eye maple surrounded by an ebony frame with spalted-maple inlay.

The Golden Collector set, priced at $9,995, will take its place beside the House of Staunton’s well-known mammoth ivory set, also based on the classic design. (Unlike elephant ivory, tusks of the extinct woolly mammoth are considered fossils and can be sold legally.) The price of that set, currently $12,999, has risen sharply with the cost of the material.

“These sets combine old-world craftsmanship with the feel of a playing set,” Camaratta says. “In 1924, the Staunton pattern became the official international standard of all tournament play, though it had been used by all the great names in chess prior to that.” Indeed, nearly 160 years after its introduction, elegance and solidity are still the hallmarks of a Staunton set.