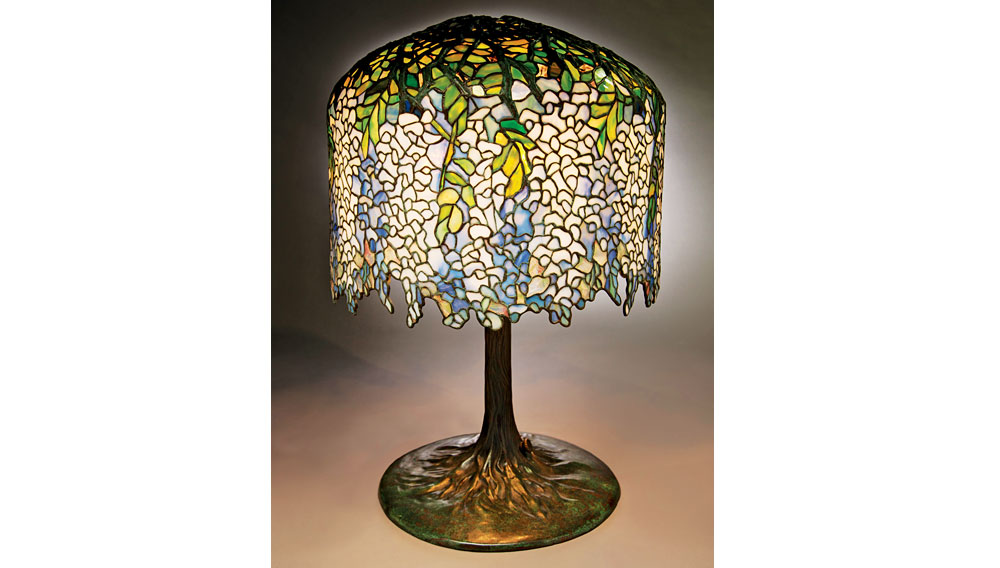 Tiffany table lamps—the stained-glass furnishings made in the late 19th and early 20th centuries at the New York design studio of Louis Comfort Tiffany—were never a bargain, says Ben Macklowe, president of the Macklowe Gallery in Manhattan. The gallery specializes in lamps and other art objects produced by Tiffany Studios, which operated, under various names, from 1878 until its founder’s death in 1933. The lamps were expensive when they were new, and except for when they fell out of fashion for a couple decades following the studio’s closure, they have risen in value. When Macklowe’s parents began handling Tiffany items in 1965, a 12-light Lily lamp cost $2,500. (The lampshades often depicted flowers, and the lamps were named for those flowers.) By the time the Macklowes opened their gallery in 1971, the same lamp sold for $5,000 to $6,000. Today its price has soared to $65,000.

The beauty—and thus the value—of a Tiffany lamp can be credited in no small part to its selector, the person who picked the pieces of stained glass that form the lamp’s shade. Louis Comfort Tiffany, a son of Tiffany and Company’s founder, Charles Lewis Tiffany, favored women for this task, believing they were better able to perceive the subtle gradations of color in the sheets of glass produced by his workshop and thus better equipped to aid him in his goal of painting with light. The so-called Tiffany Girls worked under the direction of Clara Driscoll, who, it is believed, created many of the designs for the lampshades, though Tiffany kept the credit for himself. Like Driscoll, the Tiffany Girls worked in anonymity, but the choices they made now can be worth tens or even hundreds of thousands of dollars. “There are 22-inch Peony lamps that are challenging to sell at $80,000, and some models with extraordinary glass that collectors will happily pay $300,000 for,” says Jodi Pollack, the head of the 20th Century Design department at Sotheby’s.

Sotheby’s will conduct its Important Tiffany sale on December 18 in New York. The auction’s table lamps will include a Double Poinsettia, a Daffodil-and-Narcissus, a Poppy, and a Lotus. Each lamp has a presale estimate of $80,000 or more. The auction-record price for any Tiffany item belongs to a one-of-a-kind Pink Lotus table lamp that sold for $2.8 million in 1997 at a Christie’s sale in New York.

It is unlikely that the record will be in jeopardy during a Michaan’s Auctions sale on April 12 in Alameda, Calif., but the lots will include a 22-inch Peony lamp with a presale estimate of $200,000 to $250,000. The auction will be the third in a series of sales from the Louis C. Tiffany Garden Museum Collection of Japan. The collection belonged to the Japanese businessman Takeo Horiuchi, who closed his museum and was planning to build a new facility when he learned—from a Japanese-government study conducted after the 2011 Fukushima disaster—that the land for the new site was in an earthquake zone. That news prompted Horiuchi to sell his Tiffany collection and get it out of Japan rather than risk its destruction in an earthquake. Allen Michaan, the president of Michaan’s Auctions and a longtime collector of Tiffany windows, assembled a group of investors and purchased the 618 pieces from Horiuchi. Through the auctions, he expects to at least recoup the sum paid. “I don’t know when a collection like this has ever come up before,” Michaan says. “It’s wonderful to bring back this amount of material that people thought might never come back to the United States.”