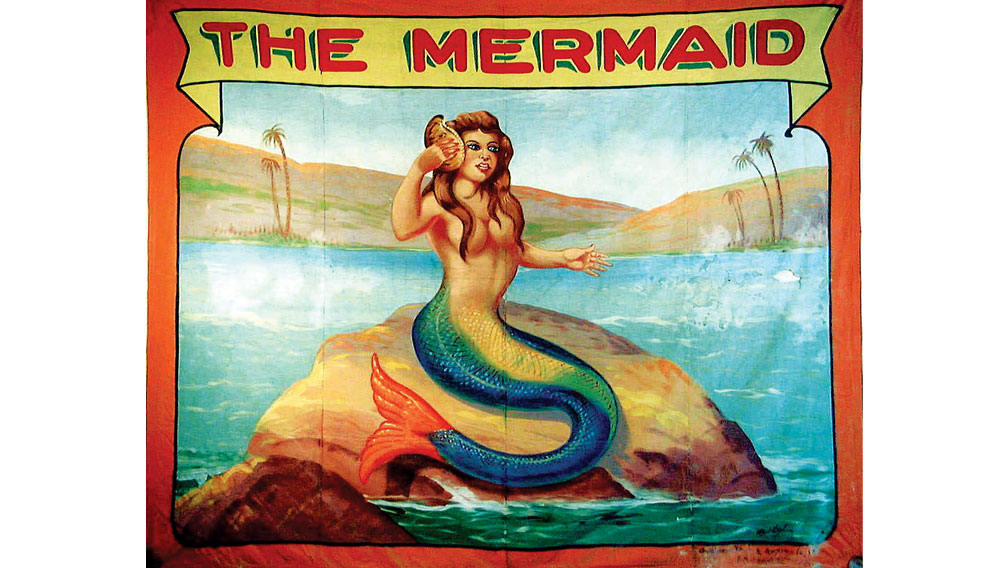 Sword swallowers, fire-eaters, giants, midgets, fat ladies, tattooed ladies, bearded ladies— Johnny Meah has painted them all in his 55 years as a sideshow-banner artist. When he is asked which of his more than 2,300 banners was best at luring customers into the tent where the so-called freaks performed or stood on display, the 74-year-old Meah responds by telling a story. He describes how he once co-owned a sideshow and asked his partner to take two canvases off the bannerline, the display of multiple banners that hangs in front of a tent, because he felt they “had no point to them.” His partner refused, saying, “You never know how many tickets those banners sell.”

Meah understood: People will go for the damnedest things, so it can pay to include a few banners that allow for the damnedest interpretations. “The average sideshow front is 100 feet long, and the average person takes steps in increments of three feet. Thirty-three steps and you’re past,” he says. “As you take those 33 steps, we have to intrigue you enough to come in. There’s always going to be one banner that makes you say, ‘My god, I want to see that.’ ”

Sideshows have mostly vanished, but the banners promising audiences Otis the Frog Boy, the Rubber-Skinned Girl, the Iron-Tongued Marvel, and similarly freakish creatures remain. And collectors will spend far more than the price of a sideshow ticket to acquire one of these banners.

Among the fairground-related items offered in February at the Milhous Collection sale, a $38.3 million auction held in Boca Raton, Fla., by Sotheby’s and RM Auctions, was an extra-long sideshow banner titled Hell’s Belles: Strange Women. Featuring images of a fat lady, a half-elephant girl, a comely redhead with oversize pins piercing her limbs, and five other strange women, it sold for $12,650, a likely auction record for a sideshow banner. Other banners in the Milhous sale sold for $3,450 or more.

The sideshow-banner market is relatively new. Its rise can be traced to a 1983 trip that Carl Hammer, then a budding gallery owner from Chicago, made to Gibsonton, Fla. Hammer had read a story about the town, a winter haven for show people, and became fascinated. He contacted Meah, who was featured in the article (and pictured swallowing a sword), and asked to meet him and other residents who had banners they might sell. “I was shocked that no one looked at them as artwork,” Hammer says.

Hammer purchased several dozen banners he liked and brought them back to his gallery. “They were an immediate success,” he says. “We sold them really quickly.”

As with any collectible item, certain types of sideshow banners are more coveted than others. James Taylor, a sideshow historian who owns four-dozen banners, says those that have been used and remain in good condition tend to be the most sought after. A period photo that captures a banner hanging on a bannerline will enhance its authenticity and thus its value. The most desired banners depict legendary sideshow performers such as Percilla the Monkey Girl, a petite Puerto Rican–born woman who had a luxuriant black beard and mustache, and her husband, Emmitt, whose skin condition furnished him a career as the Alligator Man.

Hammer also does well with banners promoting once-exotic attractions that have become commonplace. “Any fat-person banner I have sells immediately,” he says. “Another that’s popular is any banner showing a tattooed body. For some reason, they always sell right off.”