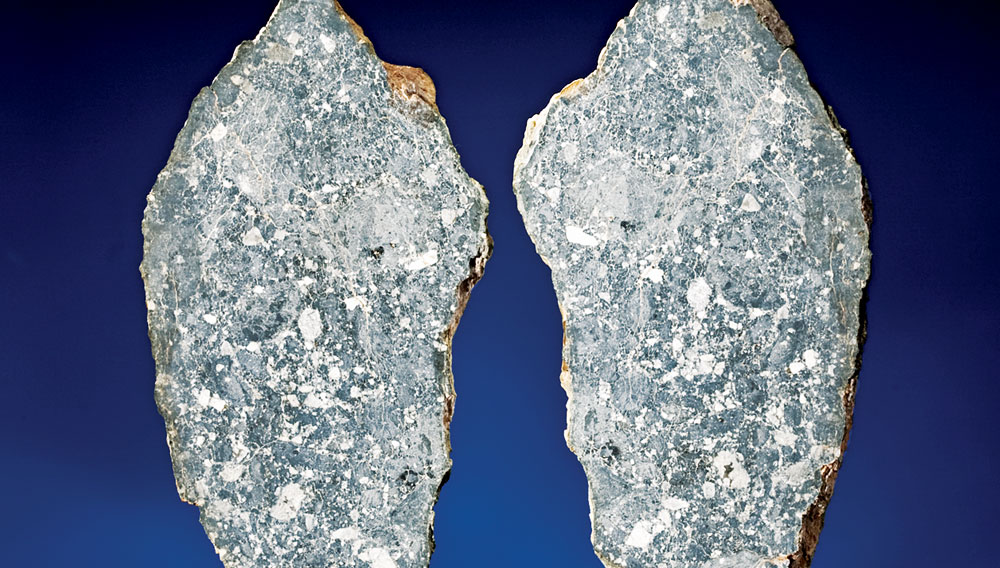 On October 9, 1992, thousands of people along the United States’ Eastern Seaboard watched a chunk of cosmic debris dart across the sky on its way to landing in Peekskill, N.Y., where it hit a parked car in the final seconds of its journey. At least 16 spectators captured the meteorite’s flight on video; some of the recordings came from Friday-night football fans who had their cameras in hand. Five hundred years earlier, on November 7, 1492, a meteorite landed in Ensisheim, France, where the townsfolk were more wary than the citizens of Peekskill: They chained the rock in the local parish church to keep it from flying back to the heavens.

Specimens from both rocks will be included in an all-meteorite sale conducted by Heritage Auc­tions on October 14 in New York. It will be the first such sale at a major auction house since 2007. The largest of the Peekskill specimens to be auctioned has an estimated value of $45,000; the tiny Ensisheim rock, which weighs only half an ounce, could sell for as much as $5,000.

The Manhattan-based meteorite dealer Darryl Pitt orchestrated the Heritage sale, and he arranged the last such auction five years ago, at Bonhams. He spent more than a year planning the latest auction, which includes more than 90 lots that together might exceed $1.5 million. The featured lot is the largest lunar specimen ever consigned to public auction: a long, flat rock that researchers split into halves. The rock weighs almost four pounds and has an estimated value of $340,000 to $380,000.

A lot’s price is determined by the rarity and composition of the specimen, and by the scientific importance, extraterrestrial provenance, and fame or notoriety of the meteorite from which the example came. A piece from a meteorite that fell unseen in a lonely stretch of the Sahara desert and was recovered centuries later by nomads is not likely to be as valuable as one from Peekskill or Ensisheim.

Size can also influence value. If the large lunar specimen in the Heritage sale meets or beats its projected price, it will set a record for meteorites at public auction. The current record holder is a pallasite that sold for $162,000 at I.M. Chait in Beverly Hills in 2007. The rare type of meteorite, which is shot through with olivine crystals, was discovered in 2000 in Fukang, a city in northwestern China. Heritage will offer a different Fukang specimen in its sale. The imposing, monolithic slab is a 2-inch-thick rectangular piece that could fetch $120,000.

Pitt says the excitement stirred by astronomical discoveries and by videos posted on the Internet from the Peekskill fall and similar events have contributed to what he considers a growing interest in meteorites. “I think our perspective has changed. Mars is in reach. It used to be a fantasy, but [now] Mars is in reach,” he says. “This is the stuff that provokes a racing imagination. I think more and more people are getting that.”

Robert Elliott, the owner of Fernlea Meteorites UK in Scot­land, first got into meteorites in the mid-1990s, when, while reading an American astronomy magazine, he came across an ad for them. The prospect of owning a piece of a falling star that had crashed into the Earth thrilled Elliott, but he was skeptical. “I half expected to wave good-bye to my $40. But I got a meteorite, a Gibeon,” says the 51-year-old Briton, referring to a chunk from a meteorite that landed in Namibia in prehistoric times. “With the Gibeon, you get a lot of meteorite for your money. It was the ideal first piece.”

Over the years, Elliott’s interest in meteorites expanded from collecting them to dealing them to hunting for them. Now the former electronics engineer is the first person British reporters call for comment when a fireball streaks across the sky. Elliott arranges a meteorite auction in Edinburgh, Scotland, every two years; the next one is scheduled for summer 2013. “I don’t think collectibles come more quirky than meteorites,” he says. “They’re not of this world. They’re the ultimate collectible.”