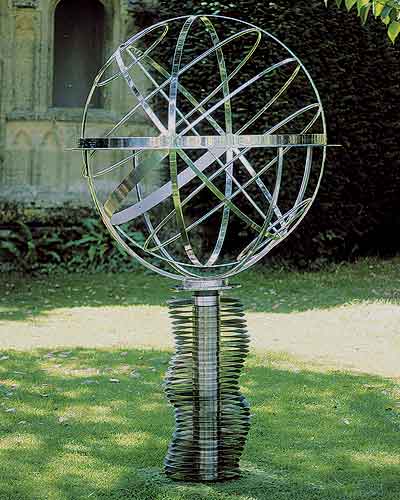 In a sunlit studio in rural Oxfordshire, England, Joanna Migdal, dental drill in hand, kneels beside a large bronze sundial base as she engraves into its surface the words, “The Lord make his face shine upon thee and be gracious unto thee and give thee peace.” Like the mottoes she includes on all of the sundials she creates, this one expresses something meaningful to the person who commissioned the item, Migdal explains, noting that she designs an original font for each of the six to 10 sundials she produces annually. “The mottoes never look perfect because the fonts don’t come out of a computer,” she says. “The letters almost seem to dance together because they are done by hand.” This sundial will take six months to complete, and when finished it will weigh 800 pounds, stand 10 feet tall, be priced at about $100,000, and be calibrated to indicate accurately the time at the site where it will be placed on a vast English estate.

Although sundials were rendered obsolete as time-telling instruments more than a century ago, artists such as Migdal continue to produce them as functional pieces of sculpture. The British have excelled at making them for at least the last four centuries. Today the British Sundial Society maintains a membership of more than 600 designers and makers, known as “dialists.”

By coincidence, two leading dialists, Migdal and David Harber, keep studios in the English village of Bix. Harber took up the craft 12 years ago after spotting an armillary, a sundial that features a series of rings assembled into a sphere, in the back of a van. “That armillary had a lot of physical presence,” says Harber. “It looked sculptural, but it also looked like a scientific instrument. I fell in love.” He was so impressed with its design that he made one himself, displaying the sundial at a local arts fair, where it quickly sold. That experience encouraged him enough to found David Harber Sundials, a company that now produces 150 dials a year, many of which sell for more than $100,000.

A chance occurrence also led Migdal to become a dialist. While she was serving as an apprentice to a sculptor, the studio received a request for a sundial, and the job went to Migdal. “I always wanted to be an artist, and I’ve always loved science,” she says. “The wonderful thing about designing sundials is that it mixes engineering, math, and art.”

Migdal, who works alone, creates dials that resemble abstract sculptures. Only upon examination do they reveal their true nature as sundials. Under even closer scrutiny, a sundial will indicate why it endures in a technologically advanced world. “When you watch a sundial, you think you’re seeing a shadow move, but that’s not what’s happening,” says Migdal. “You’re really seeing the earth move. You’re seeing the universe reflected in that shadow, and that connects to something deep inside all of us.”