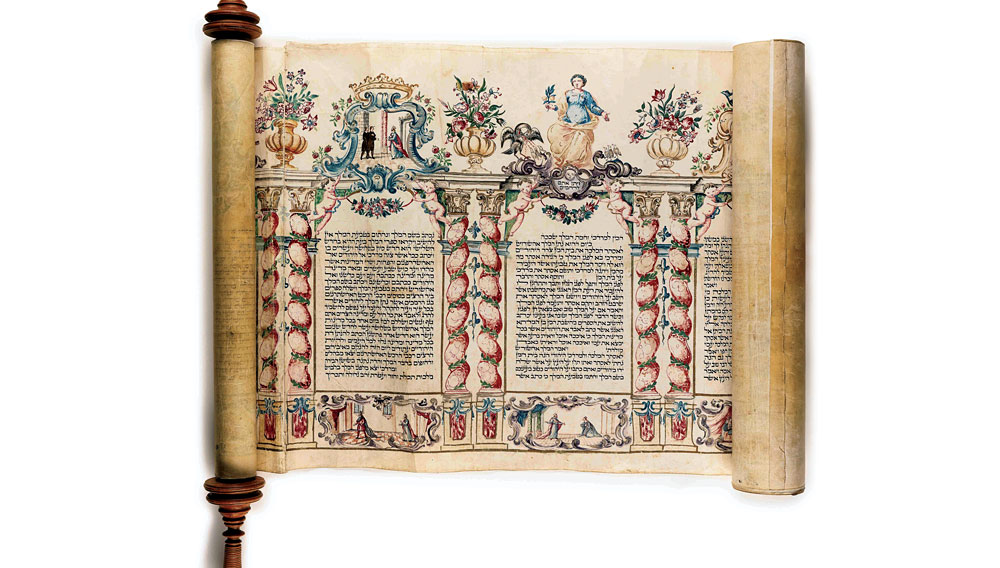 Photo by The Israel Museum/Elie Posner

Ancient stone Buddhas and medieval paintings of the Virgin Mary have transcended their religious origins and become valued across cultures for their historic and artistic significance. Now antique Judaica—artworks, texts, and objects related to Judaism—seems to be making a similar leap. In April, Sotheby’s New York sold the Michael and Judy Steinhardt Judaica collection amid much fanfare after an exhibition tour that visited Moscow, London, São Paulo, and Hong Kong. The sale’s $8.5 million in total receipts set a new record for a Judaica auction. (Sotheby’s usually offers Judaica in December in New York—its next sale is December 17—but the Steinhardt collection, hailed as the best to come to auction in 50 years, merited its own showcase.)

The lots included an 18th-century illustrated scroll from northern Italy that recounts the biblical tale of Queen Esther, who foiled a plot to exterminate the Jewish people. It garnered $653,000. Jewish institutions were dominant bidders, but some top lots went to what Jennifer Roth, head of the Judaica department at Sotheby’s, calls “encyclopedic” museums. One such institution, the Metropolitan Museum of Art in New York, acquired a mid-18th-century Italian silver Torah crown (an ornament for a holy book) for $857,000 and a pair of Russian silver Torah finials (another ornament) for $43,750. The Met also joined with the Israel Museum of Jerusalem to purchase a handsomely illustrated medieval manuscript of the Mishneh Torah, a code of Jewish law originally composed by the 12th-century Jewish philosopher Moses Maimonides. The sale was completed privately before the auction for an undisclosed sum, but Sotheby’s had placed the manuscript’s value between $4.5 million and $6 million.

Two art museums in Ohio and one in North Carolina that have no religious affiliations also secured antique silver Torah ornaments for their collections. Roth credits such interest in Judaica to a shift in focus. “They want to be sure their museum does cover the history and the civilizations of all the population, whether they’re Jewish, Hispanic, or black,” she says. “They don’t want to just focus on the majority culture.”

Historical events have created a scarcity of antique Judaica. Rarest are objects with solid pre–World War II provenances. “The last 100 years have been the most destructive to Jewish culture and to the Jews as a people,” says Daniel Kestenbaum, founder of Kestenbaum & Co., an auction house in Manhattan that deals in Judaica. “If anything, it’s amazing how much has survived.”

Last year, Kestenbaum handled the $337,900 sale of a parcel-gilt silver-filigree spice container fashioned in 1721 in Galicia, a region in what is now Ukraine. Jonathan Greenstein, another dealer of Judaica, placed the winning bid on the spice container and now displays the piece in his Cedarhurst, N.Y., gallery, J. Greenstein & Co. His asking price is $500,000. Greenstein explains that spice containers are ritual objects, typically filled with aromatic cloves and used to mark the close of the Sabbath. While Greenstein avers that “nobody in their right mind” would do anything with the spice container other than display it, he says that many of the Judaica items he sells are used for their intended purposes—and therefore have a particular value to people who practice Judaism.

Kestenbaum also generally approves of putting antique pieces of Judaica to work. “What could be nicer than continuing the heritage and the connection?” he says. “We often don’t know who the owner was, but we do know how they used it, and we can use it in the same way. For an amateur historian, that’s exciting.”