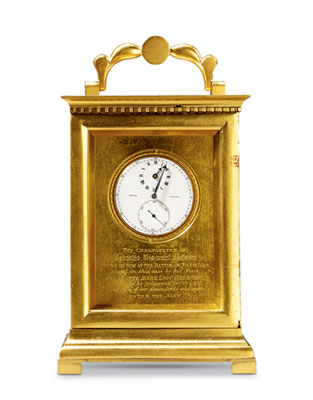 The Battle of Trafalgar was British Admiral Horatio Nelson’s finest hour, and it was one of his final hours. The fight, which occurred near Spain’s Cape Trafalgar on October 21, 1805, pitted the French and Spanish navies against a British fleet of 27 vessels. Largely because of Nelson’s tactics, the British triumphed, sinking or capturing 22 of the enemy’s 33 ships and losing none of its own. The victory thwarted Napoléon’s plans of invading England and established the supremacy of the British Royal Navy. During the battle, however, a sniper’s bullet mortally wounded Nelson, though he did live long enough to learn that the British had won.

After the fleet returned to England with Nelson’s preserved body, countless spectators viewed the January 1806 funeral procession to St. Paul’s Cathedral in London, and following Nelson’s entombment in the cathedral, his pallbearers, seeking mementos, tore off pieces of the Union Jack flag that had covered the coffin. Today, two centuries after his death, Nelson keepsakes apparently have not lost their allure; the impending bicentennial prompted Sotheby’s, Christie’s, and Bonhams to stage sales of Nelson and Royal Navy memorabilia.

This past summer, at a Bonhams sale in London, a presentation sword and belt that Nelson had awarded to Capt. Charles Tyler, who fought with the admiral at Trafalgar, exceeded its top presale estimate by more than $100,000 and sold for $310,000. Bonhams plans to hold a second Nelson auction October 18. “Many entries came in for the July sale after the consignment deadline closed,” explains Jon Baddeley, Bonhams’ head of collectors’ sales, “and we didn’t want to wait another 100 years.”

On October 5, at its New Bond Street location in London, Sotheby’s will offer the largest known piece of the flag that covered Nelson’s casket. The 35-by-36-inch fragment could fetch more than $250,000, but the sale’s most anticipated lot is Nelson’s pocket watch, which was on his body when he died. Josiah Emery, an early proponent of the lever escapement device that all mechanical watches now employ, made the timepiece circa 1787. Nelson’s watch, which a descendant of his mounted in a carriage clock case, could draw more than $627,000.

Christie’s claims a long association with Nelson, who was a contemporary of founder James Christie and purchased items from the auction house. The highlight of its October 19 auction at King Street, London, will be the gold medal awarded to Capt. Thomas Hardy for his service at Trafalgar. Hardy fought alongside Nelson for more than a decade, and he tended the admiral after he had been shot. Christie’s estimates that the medal will collect at least $212,000.

“What set Nelson apart was his tactical brilliance, his understanding of men, and his ability to lead,” says Michael Grist, the Sotheby’s specialist organizing the house’s October auction. “Nelson was hugely popular with his crew, who trusted him implicitly and would follow him anywhere. At a time when the gentle approach [to discipline] was not even considered, he understood that it was not necessary to break someone down to get the best out of him.”