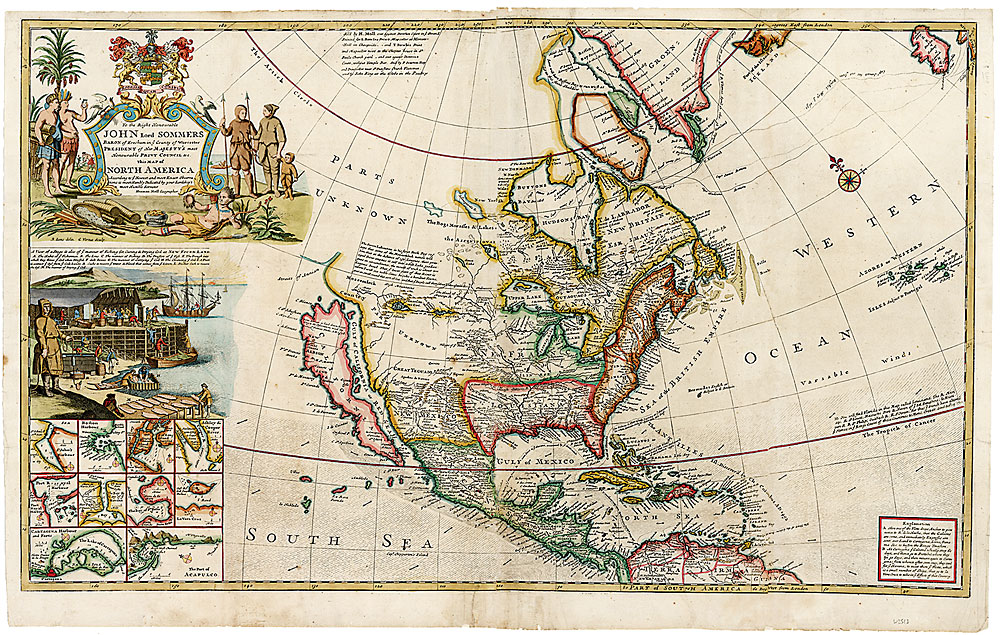 “I discovered antique maps on a ski trip to Taos, where I stumbled into a shop selling them and instantly fell in love,” says Barry Lawrence Ruderman, whose eponymous gallery overlooks the Pacific Ocean in La Jolla, Calif. “That day changed my life: Being an obsessive-compulsive young lawyer with disposable income and no bad habits per se, I dove headlong into it.” Ruderman started an antique-maps company in his garage in the early 1990s, and the rest, as they say, is history.

With interests that followed his budget, Ruderman began collecting good examples of Western American cartography, setting his sights on early and exotic material having one common theme: California depicted as an island. “We have a nice, solid, 100-year period of California shown this way, and there are still such maps being discovered,” says Ruderman. “This genre can come in a wide variety of values, dependent upon many factors. For under $1,000, you can find incredible, essential stuff, but the sweet spot for California island maps is between $1,000 and $25,000. The most expensive map of this kind that I sold was $125,000.”

The myth of California being separate from the rest of the land mass began before Europeans arrived in North America and lasted long after they mapped the actual geographical features of the region. Ruderman notes that, due in part to Spain’s colonial aspirations and in part to wishful thinking, California continued to be mapped as an island—in exceptional, fictional detail—in the early 17th century. “The Spanish always knew it wasn’t an island but were very proprietary with this information,” he says. “And as long as it was considered an island, the English could also attempt to claim it as their own. It wraps up very nicely with the myth of the highly desired Northwest Passage.”

For various reasons, a number of cartographers embraced the fabrication as well, including Antonio de Herrera, Michiel Colijn, Jan Jansson, Nicolas Sanson, and Henry Briggs, who called California “a goodly Islande.” In some cases, Ruderman notes, “It was as simple as the mapmaker being too cheap to redo his engraving.” It was not until 1747, after Christian missionaries had thoroughly explored lands that now make up the American West, that Ferdinand VI of Spain issued a royal edict that California was indeed part of the mainland. Mapmakers obliged, leaving a treasure trove of fables behind them.

“It’s funny—when people visit us in the gallery, some will look at these items and say, ‘This is all wrong. Who would want an inaccurate map?’ ” says Stephanie Waskins of Arader Galleries in San Francisco. Arader’s California island maps range in price from $900 to $15,000. “Our collectors, however, understand their true value and are especially drawn to cartographic errors. We are, after all, dealing with rare pieces of history here.”

Such maps “were not regarded as art forms 400 or 500 years ago, but there’s a tremendous excitement about them now,” Ruderman says. “And values are going through the roof.”