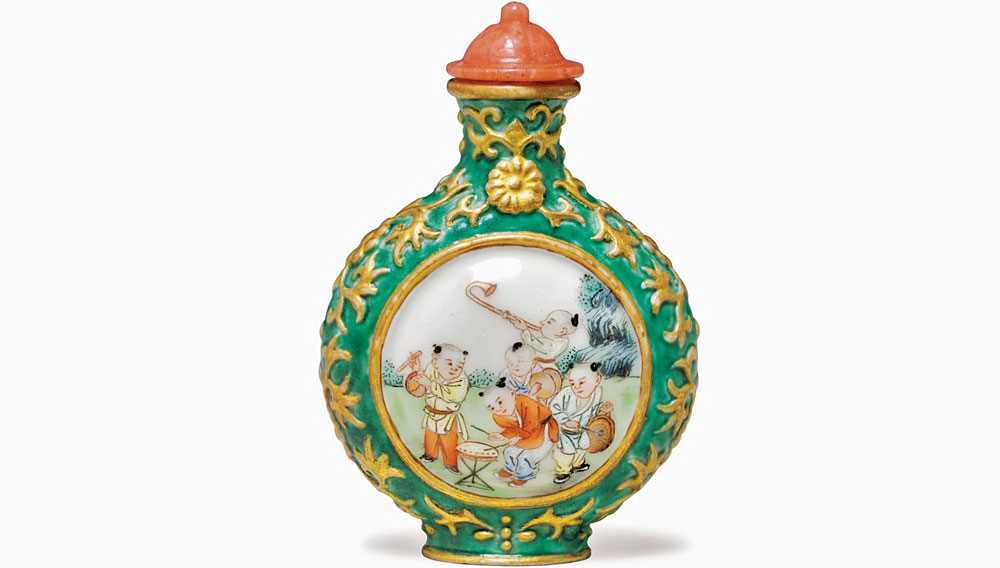 The prices of antique Chinese snuff bottles have been on the rise in recent years, and it is likely only a matter of time before they really take off. In the last decade, China’s newly minted collectors have upended the markets for Chinese arts and antiques, pushing prices for jades and imperial Qianlong porcelain, in particular, to dizzying heights. However, snuff bottles, experts say, are not on most collectors’ radar—not yet, at least. Colin Sheaf, the head of Asian art at Bonhams, notes that Chinese collectors are “in there, playing the game, but they haven’t taken over. Some markets have been dramatically affected. This one hasn’t.”

Like European snuffboxes, snuff bottles (which rarely stand more than 3 inches tall) were used to hold powdered tobacco. The finest examples should appeal to collectors the way that other Chinese antique art forms do, because many are made from jade and porcelain and were created during the reign of the revered Qianlong Emperor (1735–1796), a Medici-like patron of the arts. Snuff bottles first appeared in China in the 17th century and had mundane origins. Chinese people initially viewed powdered tobacco as a medicine, and they preferred to tote their medicine in bottles. But by the 18th century, the vessels had become full-blown status symbols. Artisans fashioned them—from ivory, glass, and metal, as well as porcelain and jade—to delight the elites who collected them.

Hugh Moss, a Hong Kong–based dealer in snuff bottles, agrees that Chinese collectors are late to the party. “People are beginning to recognize what has been blindingly obvious to those intensely involved for years,” he says: “The art is much greater than was generally recognized, and this is a very high-level Qing art form, which is poised to move from one level to the next based on solid market factors.”

As recently as 2008, the world-record price for a snuff bottle sold at auction was less than $1 million. Then in November 2011, during the fourth of a series of auctions from the George and Mary Bloch collection—which Moss represents—an enamel-on-glass imperial Qianlong snuff bottle adorned with an image of a pair of European women sold for $3.3 million. (A sixth Bloch collection sale is scheduled for May 2014 in Hong Kong at a venue to be determined; four more Bloch auctions will follow.) Bonhams has staged the Bloch sales in Hong Kong partly in the hope of luring Chinese collectors. The last sale did draw some, but, Sheaf says, “it certainly hasn’t been the deluge we expected.”

On March 21, Christie’s New York will auction the snuff-bottle collection of Hildegard Schonfeld, who was a member of the International Chinese Snuff Bottle Society (ICSBS). Michael Bass, a specialist in Chinese ceramics and works of art at Christie’s, showed marquee lots from Schonfeld’s collection in October at the annual ICSBS convention in Portland, Ore. Standouts include an imperial Qianlong porcelain snuff bottle that has a virtual twin on display at the Palace Museum in Beijing. Another lot that sparked much interest at the convention is an imperial Qianlong bottle made from a pink-and-green tourmaline and carved to exploit the border between the two colors. Both bottles have presale estimates of $40,000 to $60,000. Bass believes the price of each could top $100,000—especially if a few collectors from China enter the bidding.