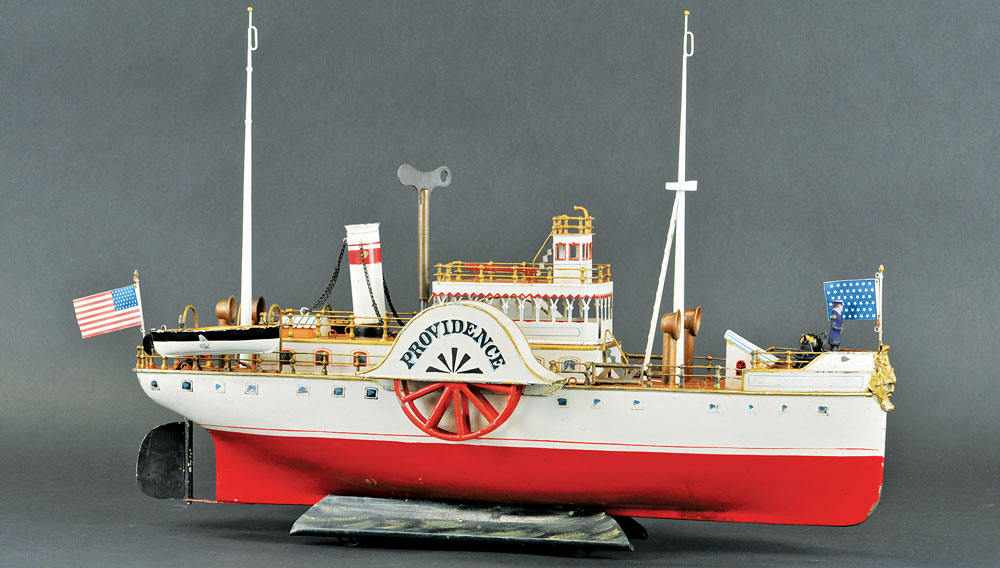 Dick Claus says he has “no idea” why his fellow collectors of antique toy boats are so captivated by turn-of-the- 20th-century paddle wheelers, but he expects them to bid ferociously for Chicago, a 31-inch, clockwork-driven paddle wheeler that will be one of the top lots at the November 10 sale of his collection. Bertoia Auctions will conduct the auction at its headquarters in Vineland, N.J.

Claus has good reason to believe that Chicago, made by the German manufacturer Märklin sometime between 1900 and 1902, will set an auction-price record for a toy boat. At a Sotheby’s New York sale in 1997, Chicago became the first toy boat to cross the six-figure threshold at auction when it commanded $108,000. That high-water mark stood until Malcolm Forbes’s collection of toy vessels went to auction in 2010; Forbes’s boats included a circa-1912 Märklin-made toy version of the ocean liner Lusitania that fetched $194,500.

Eric Alberta, an appraiser who specializes in collectible toys and other pop-culture artifacts and who consulted on the Forbes sale, says that Forbes’s choice to showcase his toy boats in a museum at the headquarters of Forbes magazine in Manhattan likely contributed to the prices they garnered. “People had years to brood over owning something from the Forbes collection,” he says. “For 25 years, they could press their noses to the display windows and look at what they lusted after.”

The Lusitania price was surpassed six months ago by Providence, a circa-1900 clockwork-driven paddle wheeler from Märklin that sold for $247,250 during part one of Bertoia’s auction of Claus’s collection. Chicago has a presale estimate of $200,000 to $250,000.

According to Bertoia Auctions associate Rich Bertoia, a new Märklin paddle wheeler sold for as much as $25 in the United States in 1900. That translates to roughly $650 in today’s dollars—a steep price for a plaything that could have ended up at the bottom of a pond, but a lucrative investment if the boat survived.

While Forbes, who died in 1990, grew up playing with toy boats and ships, Claus came to them as an experienced collector of toy trains. He launched his nautical toy collection three decades ago with a trade, offering an entire train set for a passenger ship built in the 1950s. Claus was drawn to the narratives behind nautical toys. “To me, they were a lot more interesting than toy trains,” he says. “With trains, there are hundreds of locomotives and cars, but ships are named, and they have histories.”

Now 80 years old, Claus delivered about 400 boats, what he calls “the best of the best of my collection,” to Bertoia earlier this year, with instructions to spread the treasures equally across two sales. About 80 of those boats are Märklins, and many were made between 1890 and 1914, which is considered the company’s golden age.

“What I love about Märklins is they’re far better than they need to be,” says Alberta. “They had the technical ability and the artistic flair. On a couple of the paddle wheelers I’ve seen, you can look in the windows and see little drapes with gold tassels—and you can almost see the thread count in the tassels.”