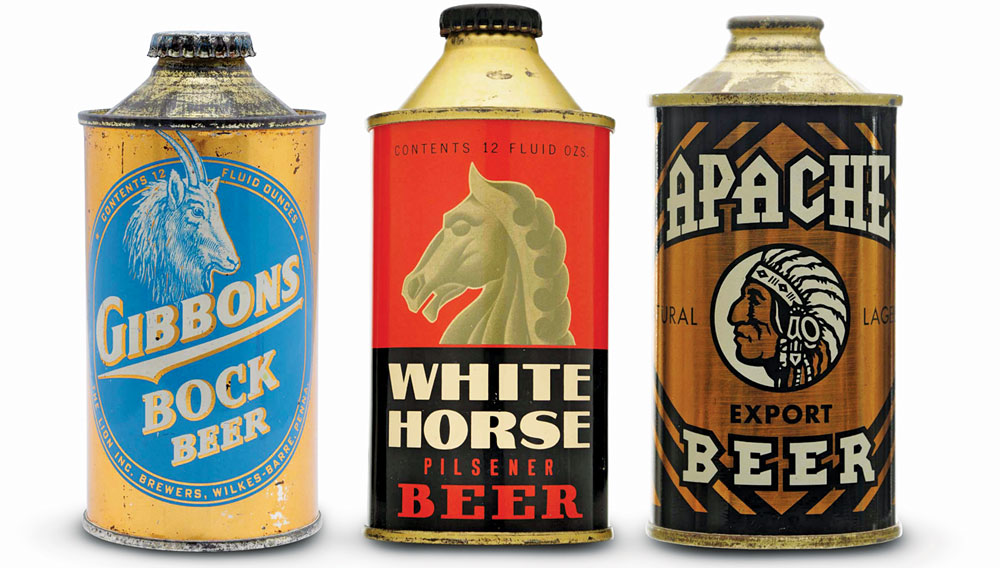 If you ever have a mid-20th-century house renovated and the contractor finds odd-looking old beer cans inside the walls, do not let the containers end up in the trash bin—or in the contractor’s possession. They could be worth tens of thousands of dollars.

“The really high-grade beer cans turn up in the demolition of buildings,” says Dan Morean, the founder and owner of Breweriana.com, which sells vintage cans and other beer-related collectibles (known as breweriana) online and by appointment at its shop in Brimfield, Mass. “In the ’30s and ’40s, when the early, rare cans were being made, people drank on the job, and they would toss the empty cans in the wall. When people renovate a kitchen or tear down a building, the cans pour out. Sadly, a lot are thrown away, but some people do their homework.”

Brewers embraced cans when the containers arrived in 1935 (in flat- and cone-top forms). They were lighter and more durable than glass bottles, and they could be covered with bold, eye-catching graphics. The collectible values of the cans that survive from that era are determined by the receptacles’ condition and rarity and the appeal of their graphics. That the cans are empty is irrelevant.

In September, Morphy Auctions in Denver, Pa., sold the breweriana collection of Adolf Grenke, a Chicago businessman, for $1.5 million. It included vintage beer cans, taps, advertisements, and other items from long-vanished U.S. breweries. The top lot was a Gibbons Bock low-profile cone-top beer can believed to be from the 1940s. It fetched $36,000 and was one of 10 cans that garnered more than $10,000.

Morphy Auctions CEO and owner Dan Morphy has “no doubt” that the current popularity of microbreweries and craft beer contributed to the success of the Grenke sale. While the Morphy sale focused on beer cans, a recent auction at Skinner in Boston featured beer itself. A lot containing two bottles of 2007 Sam Adams Utopias sold for $488, and a single bottle drew a bid of $244. Michael Moser, a fine-wines specialist at Skinner, says that auctioning collectible-quality beer is “something I’ve had on my radar for a while.” He says the idea arose from following the black market in microbrews on eBay, where people were paying three- and four-figure sums supposedly for “collectible glassware,” when in reality they were buying the contents of those bottles. “Obviously, if the prices were pushed up that high, there was a market,” Moser says. “Why not meet that market?”

Skinner will next offer beer at its Fine Wines auction on May 2. The sale will feature a vertical of Black Tuesday stout, which is produced by the Bruery in Placentia, Calif., and is aged in bourbon barrels for more than a year. Connoisseurs covet Black Tuesday; the Bruery sold last year’s allotment of 3,000 public bottles in less than 10 minutes. Skinner estimates the vertical, which includes the 2009 inaugural release through the 2012 release, at $400 to $600.

Moser cannot yet build an entire auction around beer. “The concept of aging beer is a really young idea,” he says. He also notes that craft beer generally is produced on a far smaller scale than even boutique wines; the breweries count their output by the bottle, not the case. “Probably at some point within the next five years it might be possible [to conduct a beer-only auction],” Moser says. “But it’s a ways off.”