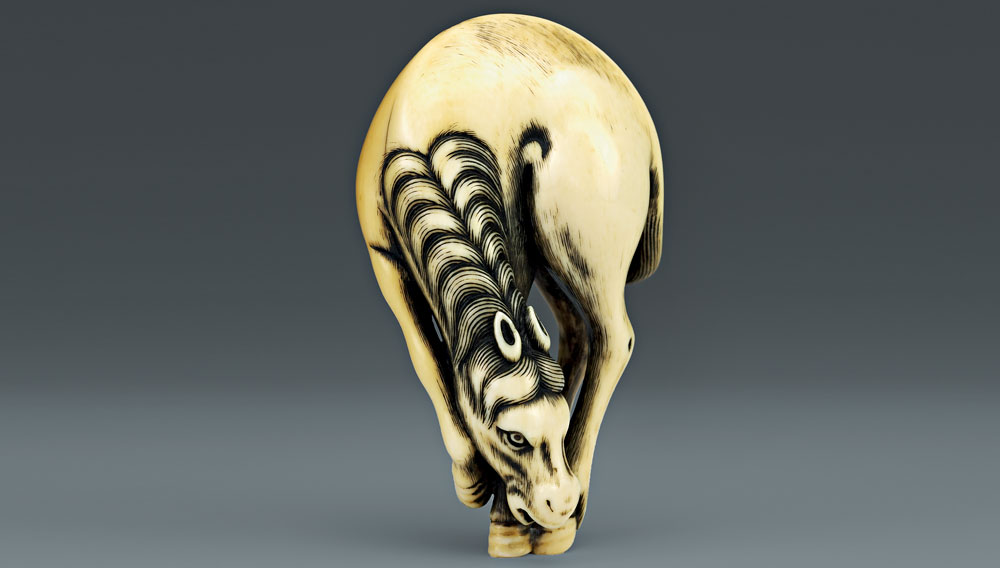 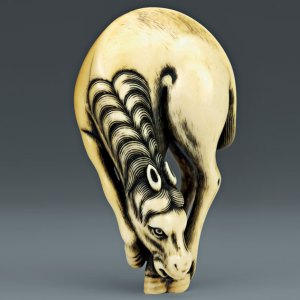 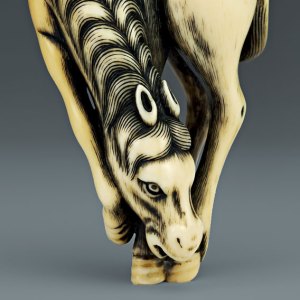 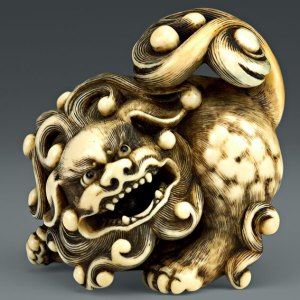 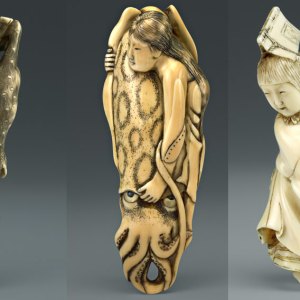 Joseph Kurstin’s first netsuke was inexpensive and unattractive. But after five decades, the piece is still part of his collection, which now numbers some 800 examples of the Japanese art form. The Miami ophthalmologist’s cache also includes a 3.25-inch-tall ivory horse that holds the world-record auction price for netsuke of £154,000 (about $300,000 at the time of the sale and $250,000 in today’s dollars).

While visiting an uncle in 1958, Kurstin first encountered netsuke (pronounced NETS-kay), a type of miniature carving that Japanese merchants once used to help secure belongings to their obi, the sashes of their pocketless kimonos. As wardrobe accessories, netsuke became obsolete around the middle of the 19th century, when the Japanese began adopting Western fashions.

Ranging in height from 1 inch to 5 inches (with rare ones reaching 7 inches), netsuke often depict zodiac animals, mythical creatures, and other characters from Japanese culture. Kurstin was enchanted by his uncle’s ivory example, which resembled a man when viewed from one angle and a turtle when viewed from another. “I asked him to buy me a netsuke,” says Kurstin. His uncle purchased him an ivory carving of a Japanese farmer. “It was nine dollars. And it was one of the ugliest netsuke I’ve ever seen. I still have it.”

The record-setting piece, which Kurstin purchased for about $170,000 from a dealer a couple years after the landmark sale at Sotheby’s London in 1990, is considerably more attractive. It was carved in the 18th century and signed by an artist named Tomotada. In 1999, at a Butterfields auction in San Francisco, Kurstin acquired another 18th-century ivory netsuke, for $250,000. This one depicts a Dutchman carrying a hare and is signed by Masanao of Kyoto. Kurstin expects to continue adding to his collection. “When I think I’ve seen everything,” he says, “another netsuke comes up in a totally different design.”

Some antique netsuke were carved from precious woods, but the ivory examples tend to draw the top prices at auction. “That may be because they stand out in a defined, dramatic way,” says Paul Moss, director of the Sydney L. Moss gallery of Chinese and Japanese art in London. “There are stupendous old wooden netsuke worth fortunes, but the handful that have made the most have been ivory.”

An ivory example has the highest presale estimate of the 250 netsuke in the Harriet Szechenyi Sale of Japanese Art, scheduled for November 8 at Bonhams in London. The piece, an early-19th-century carving of a seated stag baying at the moon, is expected to sell for $99,000 to $132,000. “It’s very naturalistic, with great-quality ivory and a great patina,” says Neil Davey, a senior consultant for Bonhams. “It’s a superb piece of miniature sculpture.”

For many collectible items, key background information is readily available, but often that is not the case with netsuke, whose origin is linked to the rise of Japan’s merchant class in the 17th century. “Netsuke weren’t considered to have any great importance. Thus very little was written about their makers,” says Davey. In addition, about a third of all netsuke lack an artist’s signature. No doubt Kurstin speaks for many netsuke collectors when he quips, “My favorite artist is 18th century unsigned.”