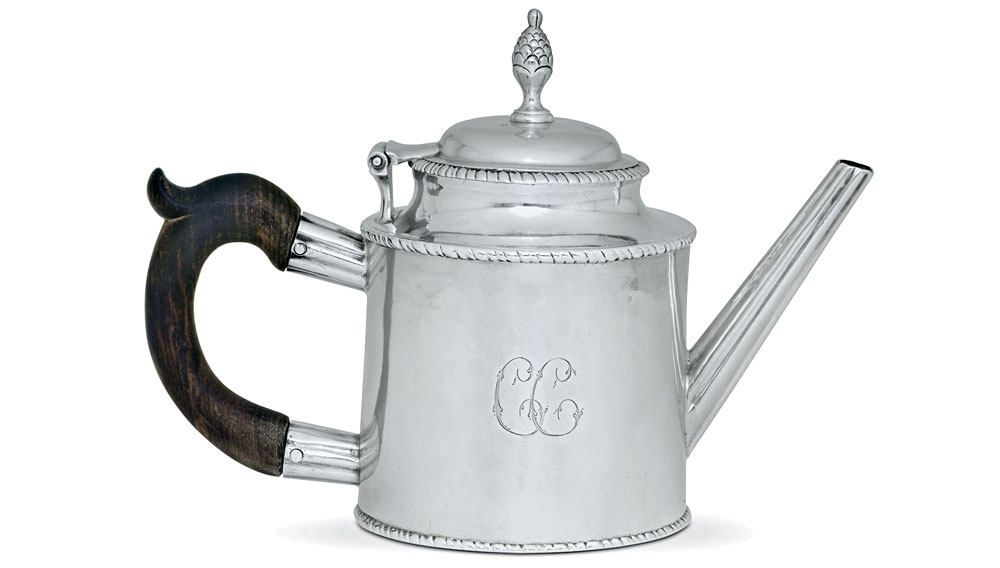 Thanks largely to poet Henry Wadsworth Longfellow, Paul Revere is associated foremost with his midnight ride on the eve of the American Revolution. But in his day job, Revere was a silversmith, and a busy one at that. From about 1760 through the end of the 18th century, his Boston shop produced more than 5,000 silver pieces—teapots, trays, tankards, goblets, buckles, and even a chain for a client’s pet squirrel.

Revere’s business gained him affluence, but instead of styling himself as a man of leisure, as the wealthy often did during that age, Revere embraced his role as an artisan. For a now-famous portrait by John Singleton Copley from 1768, Revere posed in work clothes, with his engraving tools spread before him as he contemplated a silver teapot. On January 24 in New York, as part of its Silver auction, Christie’s will present a Revere teapot for collectors to consider—for its connection to a hero of the American Revolution and for its superior craftsmanship.

The estimated value of the teapot reflects the scarcity of choicer pieces of Revere hollowware, a category of metalwork that includes virtually any tableware except flatware. Most of the best examples belong to institutions such as Boston’s Museum of Fine Arts, which has more than 90 pieces of hollowware attributed to Revere. (The MFA also owns Copley’s Revere portrait.)

Demand for Revere silver—including flatware—has been strong for decades, says Jeanne Sloane, head of the silver department at Christie’s. “If you take an 18th-century tablespoon by any of his contemporaries, it might be worth $200,” says Sloane. “But the last tablespoon we had by Paul Revere brought $13,000. That’s a dramatic difference.”

While Revere’s fame no doubt influences the value of his silver, his work stands on its own merit, says John Ward, head of the silver department at Sotheby’s New York. “This is not a case of a substandard artisan being spotlighted because of his role in the revolution,” says Ward. “He was probably the best silversmith of his generation in Boston.”

The highest price ever paid at auction for Revere silver is $752,500, for a set of wine cups. The sale occurred two years ago at Sotheby’s New York. Revere made the cups for Moses Michael Hays, who was perhaps the most prominent Jewish person in colonial America and is known to have held religious services in his home. (Boston did not have a synagogue at the time.) Thus experts believe Hays used the silver goblets as kiddush cups, which has lent them an added value as Judaica.