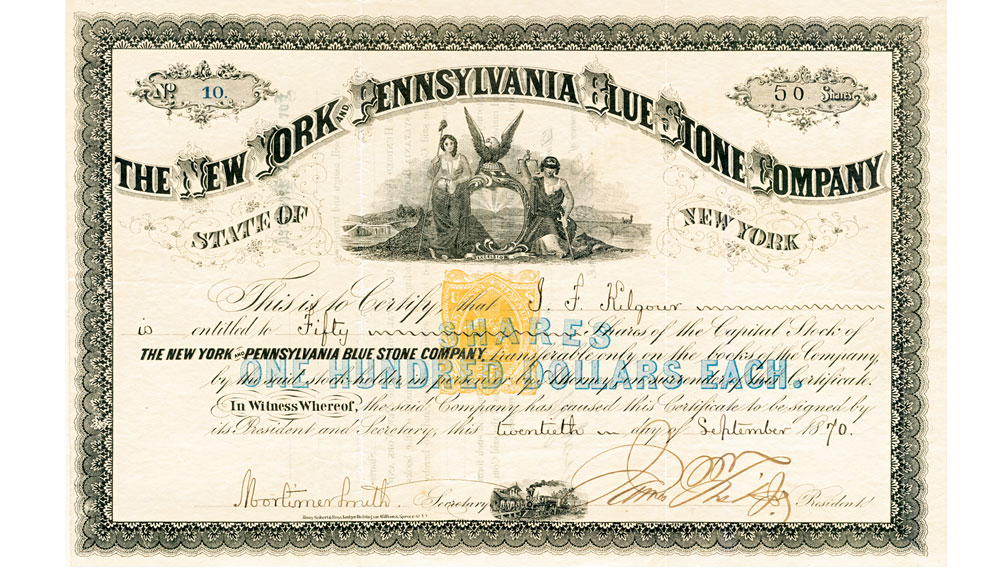 During John Herzog’s first year with his father’s Manhattan brokerage firm, Herzog & Co., the most significant trade he made involved a defunct stake in a 19th-century railroad. It was 1959, and while visiting an antiques shop, Herzog spotted a framed 1873 certificate for 100 shares of the New York and Harlem Rail Road Company, priced at $5. “I got it home, and I noticed that it was signed by William H. Vanderbilt,” Herzog says, explaining that William was the son of the legendary Cornelius “Commodore” Vanderbilt and a steward of the Vanderbilt railroad empire. “In that moment, it was all over for me.”

Regulatory changes and digital technology have rendered paper stock and bond certificates obsolete. Apple and Mic­rosoft are among the major firms that no longer issue paper certificates, and Facebook disappointed many investors when it went all digital for its initial public offering. Many companies still make the paper certificates available, but brokerage firms discourage stockholder requests for them by charging what amounts to nuisance fees.

Acquiring the railroad stock certificate prompted Herzog to seek other antiquated certificates that he considered artistically or historically valuable. As a collector, he was a pioneer; the pursuit would not even have a name until the late 1970s, when it was dubbed scripophily. Herzog, whose collection numbers some 2,000 certificates, now organizes an annual event for fellow scripophiles. From October 18 through 20, the Museum of American Finance, which Herzog founded in 1987 on Wall Street in Manhattan, will host the Wall Street Collectors Bourse, the premier show in the United States for collectible stock and bond certificates.

George LaBarre, a dealer from Hollis, N.H., intends to bring a 50-share certificate issued in 1870 by the New York and Pennsylvania Blue Stone Company. The document bears the signature of James “Big Jim” Fisk, a robber baron who was murdered by a business associate in 1872. Cer­tificates with Fisk’s signature are scarce, and LaBarre’s document is the only known example that Fisk signed on the front. It could sell for as much as $20,000 at the Collectors Bourse.

Stock and bond certificates that sell for $10,000 or more typically feature original signatures by important people and have a compelling backstory. Some combine a good tale with strong visuals. Among these is a 100-share certificate for the Casa Grande Improvement Company, which perpetrated a massive land-development fraud in the American Southwest in the late 19th century. The certificate displays an ornate yellow-gold border and images of Native Americans hunting buffalo and settlers clearing land. The piece is a favorite of Max Hensley, chief editor of Scripophily, a magazine published by the Inter­national Bond and Share Society. He notes that con men tended to commission lavishly designed documents to make their victims believe they were investing in legitimate companies. “The artistic aspects are a tip-off,” Hensley says. “They’re generally more impressive looking, with two-color printing, elaborate borders, and prosperous-looking vignettes.” Though such certificates ultimately proved worthless to the investors, their graphic flourishes now enhance their value.

The auction record for a collectible stock or bond certificate was established in 2010 during a Christie’s New York fine-art sale, when a 500-franc bond issued in 1924 by French surrealist artist Marcel Duchamp fetched slightly more than $1 million. The certificate was a legitimate financial document, designed to fund a scheme for gambling at roulette. It promised the holder 600 francs after three years.

Antique stock and bond certificates could be as valuable to financiers as they are to collectors, says LeBarre. He is convinced that some of his clients who work in finance are better at their jobs because of what they have learned from their collectible certificates. “They teach you something about why the companies were in business,” he says, “and why they are out of business.”