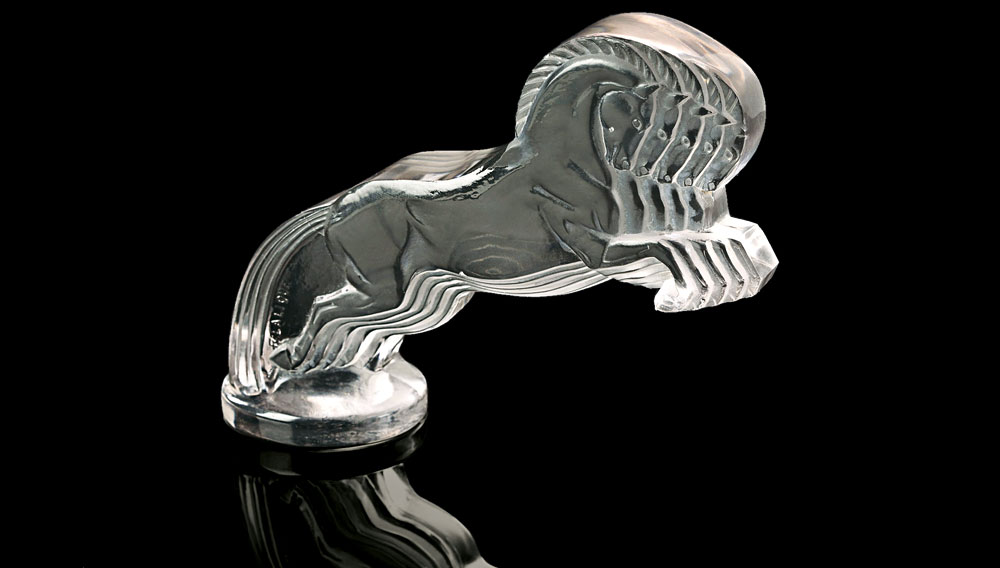 Kewpie dolls, comets, airplanes, dogs, Indians, policemen, birds, butterflies, devils thumbing their noses, and nubile women in varying states of undress were among the nickel-plated brass or bronze figurines that decorated the radiator caps of cars during the early years of motoring. These automotive mascots—the European term for what became better known as hood ornaments once radiator caps went under the hoods of cars—were fashioned by companies independent from the automakers and sold as aftermarket enhancements. Car owners selected designs that reflected their interests or tastes or, in the opinion of at least one car company, lack of taste.

Automakers responded to the popularity of aftermarket mascots by creating their own official ones. By 1910, Mercedes-Benz was affixing its three-pointed star to its cars. Other marques soon or eventually followed, employing storks, archers, leaping jaguars, and rams’ heads as hood-top advertisements for their brands.

Now long divorced from the cars they adorned, vintage mascots can fetch four- and five-figure sums at auction. Buyers include collectors who will perch them on display shelves, auto restorers acquiring missing components to vintage cars, and occasionally a car owner planning to employ a mascot for its original purpose: to personalize a vehicle. Mascots will likely be among the lots at Bonhams’ Exceptional Motorcars and Automobilia sales in Carmel, Calif., August 18 and 19, and at Barrett-Jackson’s Las Vegas auction September 22 through 24.

One of the world’s most valuable mascots is a glass fox crafted by René Lalique. During a 2004 Bonhams auction in Massachusetts it fetched $181,000.

Lalique entered the mascot business in 1925, toward the end of his career, when Citroën commissioned him to make an ornament for the 5CV. He delivered an Art Deco quintet of prancing horses and went on to create more than two dozen designs for aftermarket sale. Lalique mascots draw the highest prices because of the competition among Lalique collectors, and because they are rare, especially pristine examples. “They’re not thin, but they are glass material, and glass does have a frailty,” Toby Wilson, head of Bonhams’ automobilia department, says of the Lalique mascots. “If you fire a pebble at it at 25 mph, it’s going to flake.”

Lalique’s designs might have pleased the executives who ran Rolls-Royce during the Edwardian era, but most other mascots of that time did not. Convinced that these expressions of individuality were spoiling the dignity of their machines, Rolls-Royce officials encouraged artist Charles Sykes to sculpt the mascot later dubbed the Spirit of Ecstasy. Rolls-Royce offered the ornament as an option beginning in 1911 and made it a standard component in 1921. The company is celebrating the mascot’s centenary this year by offering a limited-edition Phantom adorned with a Spirit of Ecstasy cast in silver.

As their cars’ shapes have become more streamlined, most automakers have abandoned mascots—Jaguar’s leaping cat is extinct, and Bentley’s Winged B now is an option only on the Mulsanne. Nevertheless, some car owners still adorn their vehicles with them. Rory Brinkman, Barrett-Jackson’s automobilia director, has spotted vintage 20th-century designs atop the hoods of newer cars on the boulevards of Palm Beach. “An owner will drill a hole in the hood of a late-model car and put the ornament on,” he says. “Half of them are horse-related. It’s part of the lifestyle down there.”