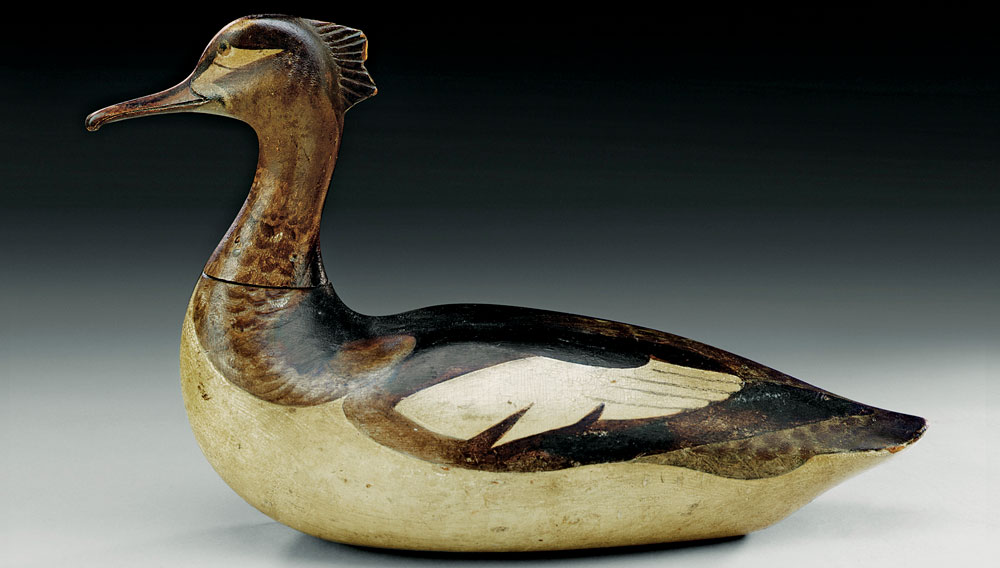 Dick Coen hunted ducks before he hunted antique duck decoys. Boyhood memories of shooting excursions with his father led him to collect the carved and painted wood sculptures that are designed—usually—to lure game birds toward hunters’ blinds. Now 78, Coen owns one of the finest decoy collections in America. It includes a circa-1860 red-breasted merganser drake by Captain Charles Osgood and a mallard drake from 1920 that carver Charles “Shang” Wheeler gave to the Ford family after visiting their Michigan fishing camp.

Coen, a lifelong sportsman, prefers decoys that have been used in the field—”hunted over,” as he says—but he made an exception for a bluebill drake that A. Elmer Crowell fashioned sometime around 1915. The Crowell drake is a “decorative,” or a decoy that was conceived as a work of art. “It’s such an outstanding carving, and Elmer Crowell is one of the best,” Coen says. “His carvings are very valuable.”

Calling Crowell’s decoys valuable is an understatement. The artist, who was born in 1862 on Cape Cod, Mass., dominates the duck decoy universe. He produced the highest-quality work and plenty of it: Six of the 10 most expensive decoys sold at auction bear his stamp. Crowell is said to have carved his first bird when he was 14, but he initially earned fame as a waterfowl-hunting guide. Not until 1912 did he begin making decoys full time. “He had an ingrained knowledge of what a bird looked like, and he took it and translated it into wood and paint,” says Stephen O’Brien Jr., chairman and CEO of Copley Fine Art Auctions in Boston. “A lot of decoy artists can carve but not paint, and a lot can paint but not carve. To put painting and carving together is somewhat rare in the decoy field.”

Talented as Crowell was, another Massachusetts artist, Lothrop Holmes, made the decoy that sold for the current auction-record price. Sometime in the 1870s, Holmes created the red-breasted merganser hen that fetched $856,000 at a 2007 sale jointly conducted by Christie’s and decoy specialists Guyette, Schmidt & Deeter. The hen dethroned a circa-1915 preening pintail by Crowell that sold for $801,500 in 2003.

At the time of the Holmes hen sale, it seemed imminent that someone would bid $1 million for a decoy. That was before the financial crisis of 2008 rattled the entire art market. O’Brien crossed the seven-figure barrier in a private sale in 2007, when he sold two Crowells—the preening pintail that once held the auction record and a sleeping Canada goose—for $1.1 million each. The feat comes with an asterisk, however. The Crowells were among 31 decoys that O’Brien sold as a group for $7.5 million.

A decoy will sell at auction for a million dollars, say experts, but probably not for another few years. “Certainly there are birds out there that will give the seven-figure [threshold] a run for its money,” says Andrew Holter, head of Christie’s American Furniture & Decorative Arts department. “It’s just a matter of when they come out.”