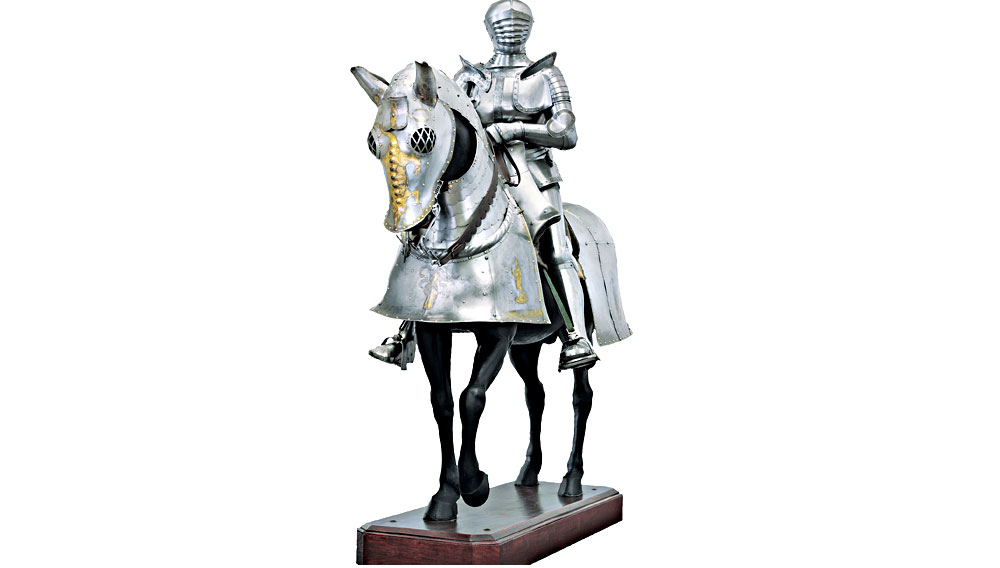 As combat garb, suits of armor have been obsolete for centuries. But its sculptural qualities can render a suit timeless as a decoration for the home, whether the armor is an antique replica or an exceedingly rare and valuable original. “Antique armor does fit well alongside contemporary and modern art,” says Thomas Del Mar, a London dealer who conducts biannual auctions in association with Sotheby’s. “It just looks great. It’s as simple as that. It will sing out wherever you place it.”

Collectors have long recognized the decorative qualities of armor. The suits were so popular—and so scarce—in the 1800s that artisans met the demand by replicating popular designs from past centuries. Many dealers and auction houses carry these now-antique suits, labeling and pricing them accordingly; in December, Del Mar sold a complete 16th-century-style suit created in the late 19th or early 20th century for about $4,400.

That sum is far less than the record-setting auction price of £1.9 million that an original 16th-century suit fetched in 1983 during a Sotheby’s sale in London. (At the time the price was the equivalent of $3 million.) Peter Finer, a London-based dealer of antique arms and armor, says that he sold the suit several years ago for “considerably more than that.” The three-quarter-length parade armor—an exquisite type of armor intended to be worn as a status symbol, not as protection—once belonged to the first Lord Astor of Hever, aka expat American millionaire William Waldorf Astor. Renaissance-era master Giovanni Paolo Negroli fashioned the suit in the 1540s for France’s King Henry II.

Bonhams will conduct antique arms and armor auctions June 20 in San Francisco and July 20 in London, and Christie’s has such a sale scheduled for June 22 in London. Del Mar’s next sale with Sotheby’s is June 29 and likely will include antique suits of armor, either originals or replicas.

In addition to driving the production of replicas, the demand for suits of armor also prompted unscrupulous craftsmen in the 1800s to produce bogus suits, which may be antiques but should not be confused with antique replicas. “Outright fakes are usually very recognizable,” says Stuart Pyhrr, who heads the Department of Arms and Armor at the Metropolitan Museum of Art in New York. “They were based on medieval coins and medals that didn’t translate well into 3-D.” Occasionally, the metal is the giveaway: Some fakes are made from a type of steel that did not appear until the 19th century. Finer says fake armor also can reveal itself when worn. “With helmets,” he says, “you can find the eye slit above the eyebrows”—a flaw that would have made the suit more worthless to the knight who wore it than to the collector who acquires it.