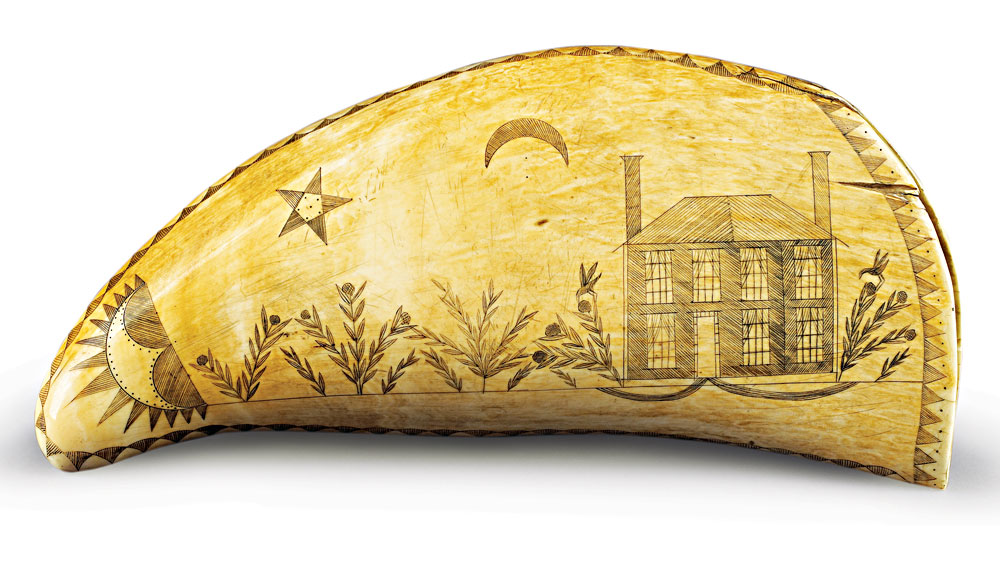 On a glorious Sunday in May a group of about 20 visitors landed on Nantucket; bypassed the beaches, shops, and other popular destinations; and gathered in the Nantucket Whaling Museum’s storage facility, a barnlike structure far from the island’s downtown. They were collectors of scrimshaw, a folk art practiced most notably by 19th-century whalers, whose best-known pieces are the sperm whale teeth they engraved during idle moments on their ships.

Access to the storage facility was the highlight of this year’s Scrimshaw Collectors’ Weekend, an annual event organized by the New Bedford Whaling Museum in New Bedford, Mass. Inside the storage building, the collectors were allowed to view and handle scrimshaw not on display at the museum. Alan Neuren, who made the trip from his home in Maine, peered into a drawer full of teeth by William Perry, a 20th-century scrimshander—as scrimshaw artists are called—who had a flair for depicting whale-hunting scenes and for hiding his initials in his images. “It’s like the Where’s Waldo? of scrimshaw,” Neuren said as he lifted a tooth from its foam bedding and searched its surface for a W and a P.

Scrimshaw enjoyed a boost in popularity when President John F. Kennedy decorated the Oval Office with his collection, and the demand for it has only risen as interest in all forms of American folk art has grown. “Twenty to 30 years ago, I could buy more great scrimshaw than I had money,” says Alan Granby of Hyland Granby Antiques, a dealer from Hyannis, Mass. “Today, I have more money than great scrimshaw I can buy.”

Teeth engraved by Frederick Myrick during an 1826–1829 voyage aboard the whale ship Susan are the collector’s Holy Grail, because Myrick was the first to sign and date his pieces. In contrast to Myrick, most scrimshanders remain anonymous, though a few exceptional artists have earned nicknames from collectors. The Albatross artist, for example, was named for his first attributed work, which features the seabird.

Some three dozen Susan teeth exist, and about a dozen of those are in private collections. Last year, Granby paid an auction-record price of $200,600 for a Susan tooth. He made his bid during Northeast Auctions’ Marine, China Trade, and Sporting Art sale, an annual event known for its scrimshaw lots. This year’s sale takes place August 20 and 21 at the auction house’s headquarters in a 19th-century mansion in Portsmouth, N.H.

During a Northeast Auctions sale in 2005, one of the two teeth that have been attributed to the Albatross artist fetched $303,000, which remains the overall auction-record price for scrimshaw.

New Bedford Whaling Museum senior curator Stuart M. Frank and his scrimshaw forensics team attributed the tooth to the Albatross artist. He considers it worthy of the record. “When you see it in person, it’s like seeing a real Vermeer,” says Frank. “It’s sublime in its effects.”