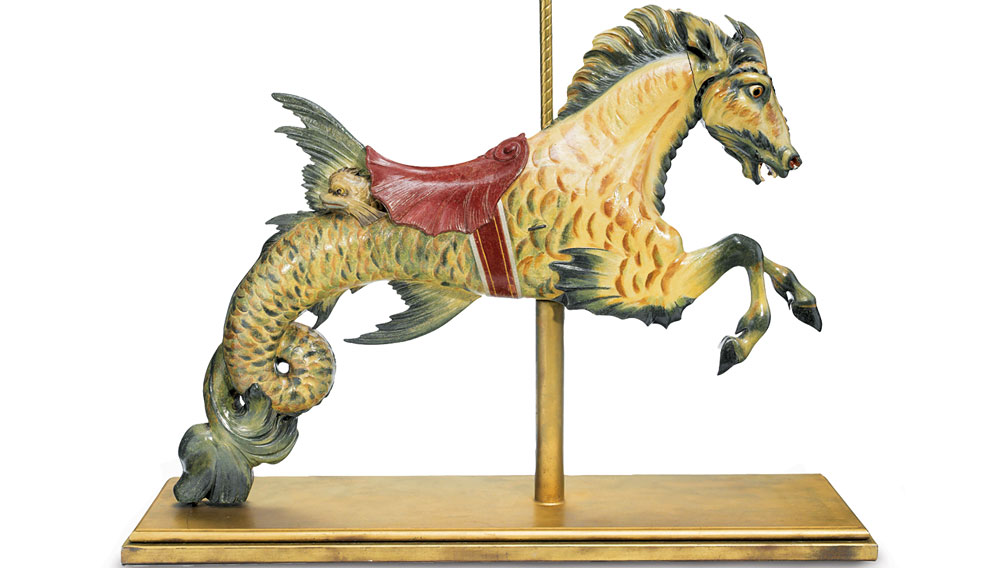 Sandy Paul’s love of carousel animals sprang from a thwarted wish. “It started when I was 4 or 5 years old, and my dad wouldn’t buy me a pony,” she says. “So I’d pedal to the local amusement park, pay a quarter to ride the carousel, and that was my pony.” Paul and her husband, Gary Franklin, have been restoring and selling antique carousel animals for the last three decades through Mycarousel.com, their Massachusetts-based business. The prices of their carved-and-painted mounts approach those of well-bred steeds. The standout among the company’s current offerings is an $82,000 pinto pony with a saddle carved to resemble an animal pelt.The inventory also includes more exotic beasts, such as a snarling lion ($60,000), a trotting zebra ($23,500), and a giraffe with a gold snake coiled around its neck ($45,000).

In the antique-carousel-animal market, horses far outnumber menagerie animals, the term that collectors use for lions, giraffes, and other non-equine creatures. Because of their rarity, menagerie animals typically command higher prices. The presumed auction-price champion is a majestic-looking Saint Bernard dog, which fetched $174,900 in 1992.

The market may not be as hot as it was 20 years ago, but notable sales still occur. In December 2012 in Los Angeles, for example, Bonhams sold the hippocamp shown here (a mythological creature that is also called a sea horse) for $50,000, against a presale estimate of $35,000 to $40,000.

In the United States, the golden age of carousels lasted from the late 19th century to the late 1920s, when trolley companies boosted weekend ridership by installing the machines at the end of their lines. When the Depression came, production of new carousels ceased. Today, fewer than 225 of the 1,200 or so machines made during the golden age are still spinning. Many succumbed to the perennial hazards of fires and floods. Others were lost during the spate of amusement-park bankruptcies that followed the advent of television.

Carousels are now regarded as children’s amusements, but originally they were intended for grown-ups. The antique animals are carved at a size that suits adult riders, their faces can take nightmarishly fierce expressions, and the horses’ manes can be spiky enough to put an eye out. Then there is M. C. Illions, a carver from the early 20th century whose masterpieces are coveted. He used to create anatomically correct stallions for the carousels of customers who displeased him.

Though carousel animals are large, their size does not faze collectors. Paul and Franklin have their own collection of 35 animals. They display four in their dining room and three in their foyer. They also keep some in the garage and one in each bedroom. Pam Hessey, a carousel-animal restorer who runs Hawk’s Eye Studio in Kingman, Ariz., says she is certain there will always be a place for antique carousel animals—even if that place is an antique bathtub, which is where she once saw a hippopotamus displayed. “These are pieces of American history,” she says. “They’re always going to be a collectible commodity.”