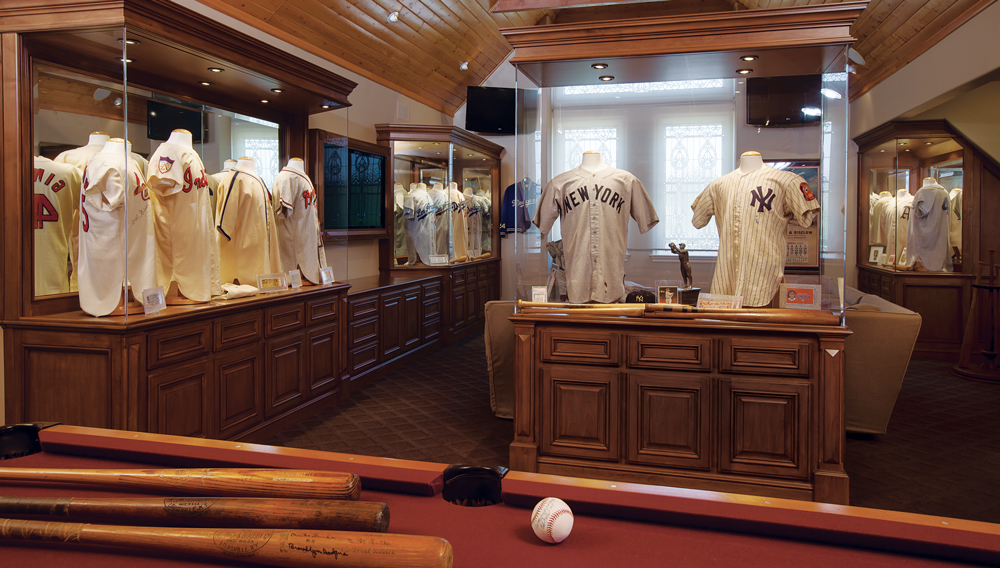 Originally published in the August 2015 issue of Robb Report Collection as “It’s a Shutout!”

How baseball became the star player of the sports memorabilia game.

Brian seigel owns roughly 40 game-used baseball bats from major-league players and displays them in a 1,200-square-foot shrine to America’s pastime at his home in Southern California. When he shows the bats to visitors, they are often apprehensive about touching them, and it is easy to understand why: Each one is a museum-quality piece of history, having belonged to a member of the baseball Hall of Fame.

“People are sometimes afraid to touch them,” Seigel says. “I say, ‘No, take it. Swing it.’ That’s the cool thing about it.”

With encouragement from Seigel, soon his guests are taking cuts at imaginary fastballs. Maybe they would swing a little more gingerly if they knew this: Historic bats, along with game-used jerseys and cards, have exploded in value over the past five years to become some of the most valuable pieces of sports memorabilia in the world. In the last year, prices have gone particularly deep for items connected to the game’s most legendary players—Ruth, Gehrig, Mantle, Cobb, Koufax, Mays, among a few others—and for lots tied to a major event, such as an MVP season or a World Series.

To get an idea of how much baseball has surpassed other sports in the collectibles market, just take a look at the top lots of the past few years. In football, the most expensive item to be sold at auction in 2015 through mid-June was a Super Bowl XII ring that belonged to Dallas Cowboy Harvey Martin. Heritage sold it for $71,700 in February. During the same time period, 31 baseball items sold for more than that, according to Price Realized, a comprehensive database for collectors that tracks more than 20 years of sports memorabilia sales in the United States and Canada. The top lot was a 1921 Babe Ruth bat that sold for 10 times the amount of Martin’s ring—$717,000—at the same Heritage auction.

In 2014, 33 baseball items sold for more than the most expensive football item. In 2013, the number was 30. “Baseball is what really drives this whole industry, because it has such deep roots,” says Bill Huggins, president of Huggins & Scott Auctions. He should know: His grandfather’s cousin was Miller Huggins, a Yankees Hall of Fame manager.

Game-used bats, game-used uniforms, and vintage cards, especially rookie cards, started increasing in value about five years ago. For example, in 2010, Price Realized reported that the average price of the top five cards sold at auction was $202,600. Last year, it was $332,600—an increase of 65 percent. This year’s growth might be even greater, according to Joe Orlando, a collector and president of Professional Sports Authenticator (PSA), an authentication service. “There are cards that are now selling for three, four, five times what they were just a year ago,” he says.

Of course, the most famous and valuable card is the pre–World War II Pittsburgh Pirates Hall of Famer Honus Wagner from the T-206 set. Only about 60 Wagner cards are known to exist. On April 25, Robert Edward Auctions sold a PSA 3 Wagner for $1.32 million, a record for that condition.

In 2000, Seigel bought a PSA 8 Wagner for $1.26 million—a record price at the time. As he started to move away from card collecting, he sold it seven years later for $2.35 million, another record. “I had the distinction,” Seigel says, “of being the first one to buy a card for over $1 million and sell a card for over $2 million.”

One man stands atop baseball’s collectible surge, lording over it like he once lorded over the sport: New York Yankees slugger Babe Ruth. Experts point to the moment in 2012 when SCP Auctions sold Ruth’s 1920 game-used road jersey for $4.42 million as the point when baseball collectibles truly moved into the big leagues. Sixty-seven years after his death, Ruth remains popular in collecting for the same reason he was popular on the field: He is larger than life. “Was he Paul Bunyan or was he a man?” says Rob Rosen, vice president of private sales and consignments for Heritage Sports. “He’s part myth, part real.”

Of the six most expensive baseball lots sold in the last 18 months, three are connected with Ruth. Number 1 on that list: Ruth’s contract for the 1918 season with the Boston Red Sox, which called for Ruth to be paid $5,000 for the season. In July 2014, it was sold by Goldin Auctions for $1 million—200 times the salary it promised Ruth.

Blockbuster sales like that continue to fuel Ruth’s legend, which fuels even bigger sales. For example, that record-setting $4.42 million Ruth jersey? “If you have a beautiful Babe Ruth jersey, that price? Forget it, that would crumble,” says Josh Evans, whose Lelands auction house bought the jersey in 2012, in anticipation of a private sale. “It could sell for $10 million.”

Says Joe Verno, whose wide-ranging sports collection includes more than 20 bats: “If you’re any kind of collector of baseball, you have to have something from Ruth.” If his house were on fire, the first item Verno would grab is his Ruth bat from the 1923 season. It is a 36-inch-long, 42-ounce monster that is so heavy Verno says half jokingly that he can barely swing it. No player uses a bat anywhere near that size today.

The bat’s girth is Ruth’s calling card, but each player’s bats are distinctive. Among Seigel’s bats, Duke Snider’s has a crisscross tape pattern, Mantle’s barrel is bruised and battered, and Ty Cobb’s handle is covered with white tape, now turned brown. The absence of those characteristics would be deal breakers for some collectors. For example, Seigel has seen Cobb bats without tape but would not buy one.

As Ruth’s skills diminished, he switched to lighter bats, which are not as desirable among collectors. Verno owned one of those first, but not for long. He spent six years looking for a bigger one, and when he found it, he bought it. “People want the telephone pole,” Rosen says.

By sheer numbers, baseball cards are the most popular item to collect. Bats are the most tangible and easiest to display, and therefore, some say, the most fun. Game-used jerseys are the most expensive because they are the most scarce. Until the 1970s, players used only four jerseys per season—two home and two away. No one could have guessed the old jerseys would one day be worth millions, so they were rarely preserved.

Seigel owns jerseys from Hall of Famers Ted Williams, Pee Wee Reese, Don Drysdale, and others, and the last thing he does before putting them onto torsos under Plexiglas is try them on, to see what it feels like to wear a Hall of Famer’s shirt. It feels warm, itchy, and historic. “I have a ’52 [Yogi] Berra—a year in which the Yanks won the World Series,” he says. “Just putting the shirt on for five minutes sends you back to ’52.”

In February, Heritage sold a 1955 Sandy Koufax Brooklyn Dodgers rookie jersey for $573,600. That is more than double the next highest price paid for a Koufax jersey—$268,664 in 2014. The Hall of Fame lefty is widely seen as one of the greatest pitchers in history, if not the greatest. This particular jersey stands out for two reasons: Koufax was a rookie, and the Dodgers won the World Series that season.

And more are on the way: At its Sports Platinum Auction, which closed July 30, Heritage Auctions planned to sell a 1966 Mickey Mantle Yankees road jersey valued at $300,000-plus. In its Mid-Summer Classic, which runs from July 29 to August 15, SCP Auctions will offer a 1968 home jersey from Mr. Cub—Hall of Famer Ernie Banks, who died in January. It is one of only three all-original Banks jerseys known to exist, says Dan Imler, vice president of SCP Auctions in Laguna Niguel, Calif. SCP’s early estimates suggest the jersey could yield $150,000—more than Banks made in his first seven seasons combined.

The numbers may be staggering, but industry experts see no end in sight. They expect the prices to continue to rise as the hobby matures. “We’re not in the cellar anymore, but we’re far from the penthouse,” Rosen says.

The higher prices have also attracted wealthier collectors who do not need to sell items to buy items. Until now, it was common to see the same items over and over again—Seigel’s Wagner card, for example, has been sold at least six times. It is also possible the high prices will prompt owners to keep items longer. “It’s getting harder and harder to get the great stuff, and that’s further fueling the prices,” Rosen says.

Seigel has experienced that firsthand. He wants to add a Jackie Robinson bat to his collection. As the man who broke baseball’s color barrier, Robinson holds a prominent place among the sport’s most collectible players and his items are scarce and expensive. The two highest prices paid for his bats were for the same one: A 34.5-inch, 33-ounce Louisville Slugger he used in his 1949 MVP season sold for $183,500 in December 2013—the same year the popular film based on Robinson’s life, 42, was released. The bat sold for $201,850 a year later.

Any Robinson bat worth owning would cost $100,000 to $200,000, Seigel says. If he could find one. And if he eventually adds one to his trophy rack, anyone will be welcome to pick it up and take a swing.