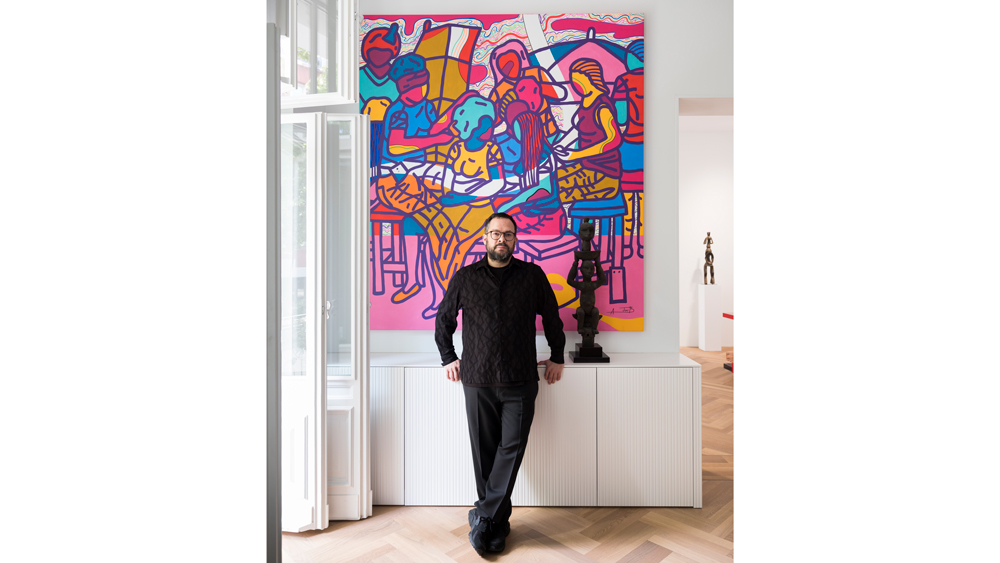 Gazing about gallerist Javier Peres’s sun-drenched apartment in Berlin’s Schöneberg district, one is struck by the seamless juxtaposition of works by contemporary artists and pieces crafted by African artists more than a century ago. “I rarely display more than 30 African works at a time. We live quite minimally, and the challenge is always how to exhibit the pieces as beautifully as possible alongside our collection of contemporary art. For me, it is important to show both types of objects on equal footing, without any hierarchy.”

Peres says his insatiable appetite for African ethnographic art was sparked by the 1984 landmark exhibition Primitivism in 20th-Century Art at the Museum of Modern Art in New York. However, it wasn’t until around 2000 that he began collecting in earnest. Since then, the Cuban-born dealer has amassed 150 or so prime African pieces, which he rotates within the gallerylike space that he and his husband Benoît Wolfrom bought and renovated in 2014, stripping it down to its bare essentials.

A Fang horned helmet mask of the So Society from the Gabon–Cameroon border area.  Photo: Andrea Rossetti/Peres Projects

While many of the African works were purchased at auction, some of Peres’s most treasured finds have been picked up at the Parcours des Mondes ethnographic-art fair in Paris, the 17th edition of which runs this month in Saint-Germain-des-Prés. “The cool thing about the fair is that you never know what you might find,” says Peres, citing a fantastic Fang figure he bought three years ago from Bernard de Grunne. “Benoît and I were planning to buy a large Congo figure from the Belgian dealer—who rarely brings more than five or six things, and they are always top, top quality—when we happened to spot the Fang. As de Grunne was our first stop in the morning, we wanted to see what else was on offer before inking the deal on our Congo figure. We wound up spending much of the day discussing its merits with our friend and advisor Bruno Claessens when suddenly, at like six o’clock in the evening, we looked at each other and said, ‘It’s the Fang we want.’ ” The early-19th-century wooden reliquary from Gabon now stands sentinel in the pair’s stark-white living room, paired with Lavender Hill Mob, a 2016 acrylic on canvas on wood by Blair Thurman, an artist in the Peres Projects gallery stable.

A late-19th- to early-20th-century Dan or We fetish mask from Ivory Coast.  Photo: Andrea Rossetti/Peres Projects

Peres says his collection has evolved over the course of nearly two decades. “In the beginning, I was drawn primarily to richly patinated female figurines such as those made by the Baoulé of Ivory Coast and the Senufo of southern Mali, as I’m very interested in how different cultures choose to present themselves and what they consider beautiful. Over the past five years, however, my focus has shifted toward works from east-ern Nigeria, where it borders Cameroon.” It’s an area, he explains, that has largely been overlooked—its artistic achievements long overshadowed by the humanitarian crisis that engulfed much of the region until the end of the Biafran War in 1970, at which time pioneering dealers Hélène Leloup, Jacques Kerchace, and Philippe Guimoit began bringing into the spotlight previously unknown works made by peoples such as the Igbo and Mumuye

“I simply love the sculptures from this border area because they are far less familiar and thus a bit outside of the artistic canon,” says Peres. A notable example is a Kaka altar figure from the Mbem area of western Cameroon that he purchased from Lance Entwistle in 2014. The sculpture had been included in the 1995–1996 exhibition Africa: The Art of a Continent, which was on view at the Royal Academy in London before traveling to the Guggenheim in New York and the Martin Gropius Bau in Berlin. “When I saw the altar figure at Parcours, it stopped me in my tracks and I bought it right on the spot.”

A helmet mask of the Sande Society, made by the Bassa people of Liberia.  Photo: Andrea Rossetti/Peres Projects

If there is a unifying theme to the pieces in his collection, it is their quality and deep provenance; nearly all have been published or exhibited. “It’s important to keep in mind when it comes to classic African art,” he cautions, “you are dealing with antiquities—and, by extension, cultural property that may be protected by law.”

Not surprisingly, such pedigreed works tend to command higher prices. “I can remember when I had a $10,000 limit, then a $25,000 limit, and then a $50,000 limit. At this point, I am willing to sell my left arm or my organs to have that mask or that statue.” His most recent acquisition is a Mumuye figure from the collection of Liliane and Michel Durand-Dessert, which he bought at Christie’s in Paris in June. It will be a highlight of a January exhibition he’s hosting, which he says will “explore the layers between the physical world and the dream world—connections that I see between artists working today and those working on the African continent centuries ago.” He will likely discover more links in that dreamy chain at this month’s Parcours des Mondes.