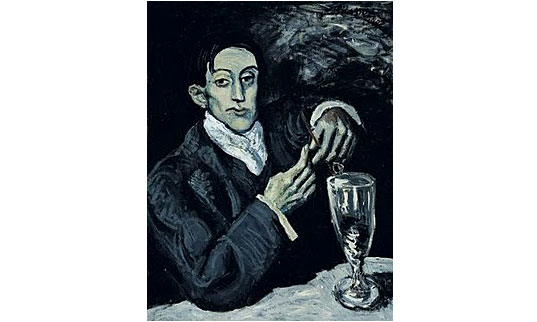 On June 23, the Andrew Lloyd Webber Foundation will make its second attempt to sell Pablo Picasso’s illustrious masterpiece Portrait of Angel Fernandez de Soto. The painting, originally scheduled to be sold in November 2006, was withdrawn from the Christie’s auction due to controversial ownership claims tracing back to the 1930s. A resolution between the claimants has finally been reached, leaving the painting to acclaimed composer Andrew Lloyd Webber, who has once again consigned the work to be sold at Christie’s. The painting is expected to fetch between $45 million and $60 million at the London auction, with all proceeds going to Webber’s foundation, which supports many causes including disaster relief, education, and the arts.

Portrait of Angel Fernandez de Soto comes from Picasso’s celebrated Blue Period, wherein shades of dismal blues are used to characterize themes of melancholy, resignation, and isolation. The painting captures the languid visage of Picasso’s friend, Angel, a gifted artist with a proclivity for self-indulgence, as he sits alone with a glass of absinthe, surrounded by the curls of smoke emitting from his pipe. The portrait not only demonstrates Picasso’s unique skill for translating emotion through brushstrokes, but it also reveals the psychological dislocation that Picasso himself experienced as a struggling artist in Paris. (+44.20.7839.9060, www.christies.com)