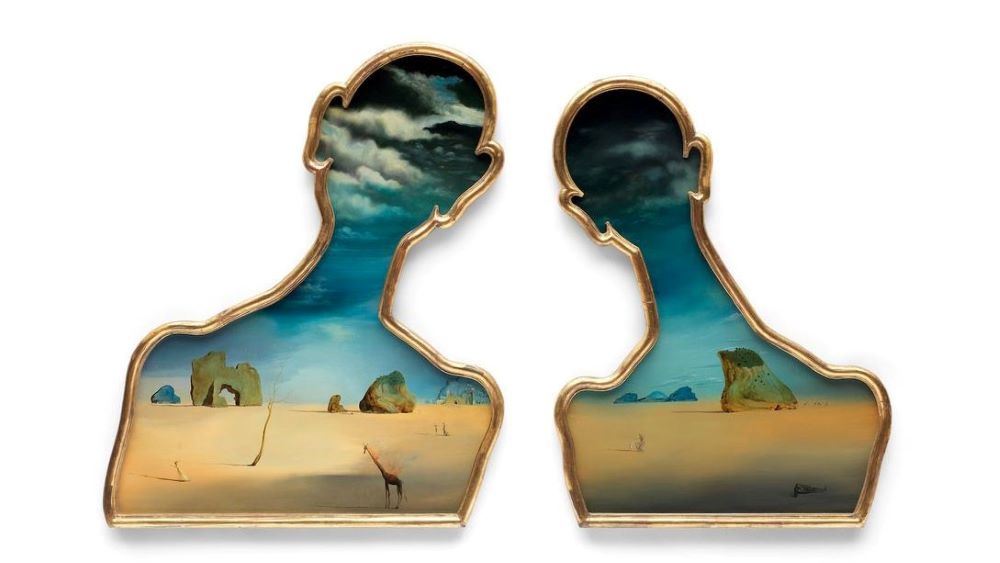 Salvador Dalí has a face worth millions. Or at least a silhouette. The towering Surrealist’s diptych, depicting himself and his wife Gala with their “heads full of clouds,” is expected to sell for up to $13 million at auction this spring.

The mind-bending work Couple aux têtes pleines de nuages (1937) is the centerpiece of Bonhams’s Impressionist and Modern Art sale, which will take place in London on March 26. Dalí painted the piece at the height of the Surrealist movement, and, notably, at the beginning of the Spanish Civil War.

“Dalí painted these monumental panels at a time of intense personal discovery and expression, while the world around him erupted into conflict,” global head of Bonhams Impressionist and Modern Art department India Phillips said in a press release. “Simply put, it is one of the most exciting works by Dalí ever to come to the market.”

The work itself is comprised of two separate panels⁠—male and female—and sees the head and bust of each covered by a barren desert landscape and mesmerizing sky. As you would expect, Dalí’s recurring surrealist motifs are peppered throughout: Scattered rocks and indiscernible human figures sit alongside a skeletal tree,  the now-famous image of a girl skipping and a burning giraffe.

The silhouettes are finished in thick gold and the painting is signed Gala Salvador Dalí, as a tribute to the artist’s wife.

For more than half a century, the painting hung in the living room of Italian composer Giacinto Scelsi. A prominent figure in Surrealist circles in the ’20s, the composer spent time with Dalí and his wife during their travels in Italy. Following Scelsi’s death in 1988, the work went on long-term loan to the Museum of Modern and Contemporary Art of Trento and Rovereto. Now it will cross the block for the very first time and without guarantee.

Dalí’s work seems to be in high demand in more ways than one. On Thursday, it was reported that 10 to 12 table-size bronze sculptures by the Spanish artist were stolen from a gallery in Sweden.

As for the diptych, Couple aux têtes pleines de nuages has an estimate of between $9.1 million and $13 million (£7 million and £10 million) and is available to view at Bonhams’s main saleroom from now until February 23.