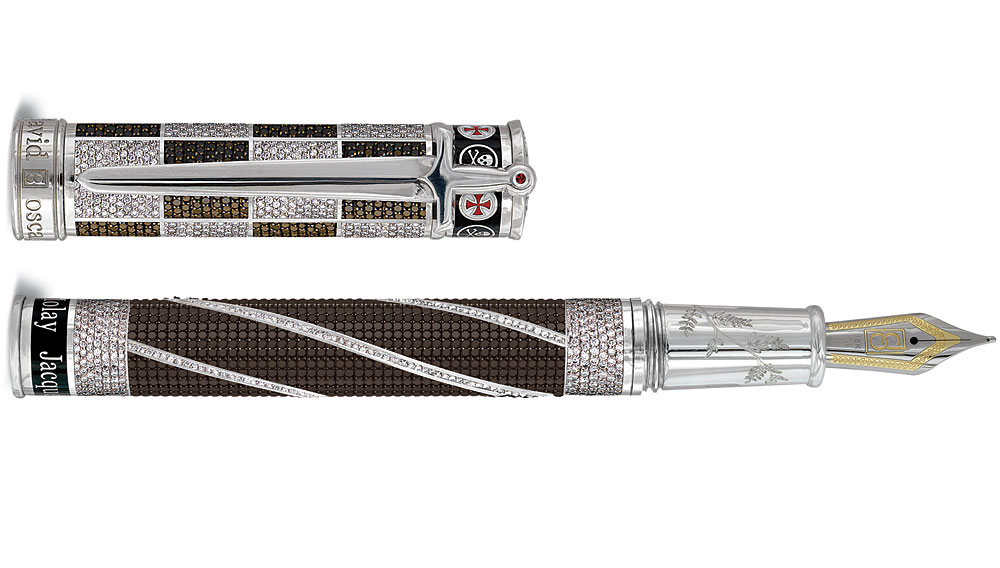 The one-of-a-kind David Oscarson Jacques de Molay pen (636.458.4345, www.davidoscarson.com) is named for the last grand master of the Knights Templar, a Christian military order that fought in the Crusades. In 1307, France’s King Philip IV, who was deeply in debt to the order, had de Molay and his fellow knights arrested on charges of heresy. Seven years later, with the approval of Pope Clement V, Philip ordered de Molay burned at the stake after he refused to confess to the charges brought against him.

De Molay’s namesake pen is made from 18-karat white gold and features more than 30 carats of black and white diamonds. The cap crown depicts the Church of the Holy Sepulcher, which was built on what is said to be the site of Jesus’ crucifixion and burial near Jerusalem. The black-diamond barrel, accented with spirals and borders of white diamonds, represents the Apprentice Pillar at Rosslyn Chapel in Scotland, which was erected 150 years after the dissolution of the Knights Templar but is said to contain many symbols of the order. The clip is in the shape of a knight’s sword, and the gripping section is engraved with an acacia branch, a Templar symbol of purity and endurance. The bottom is engraved with the image of two knights on one horse, an image also found at Rosslyn Chapel. This is a reference to the order’s oath of brotherhood and poverty—an ironic inclusion, given the pen’s opulence and roughly $400,000 price.