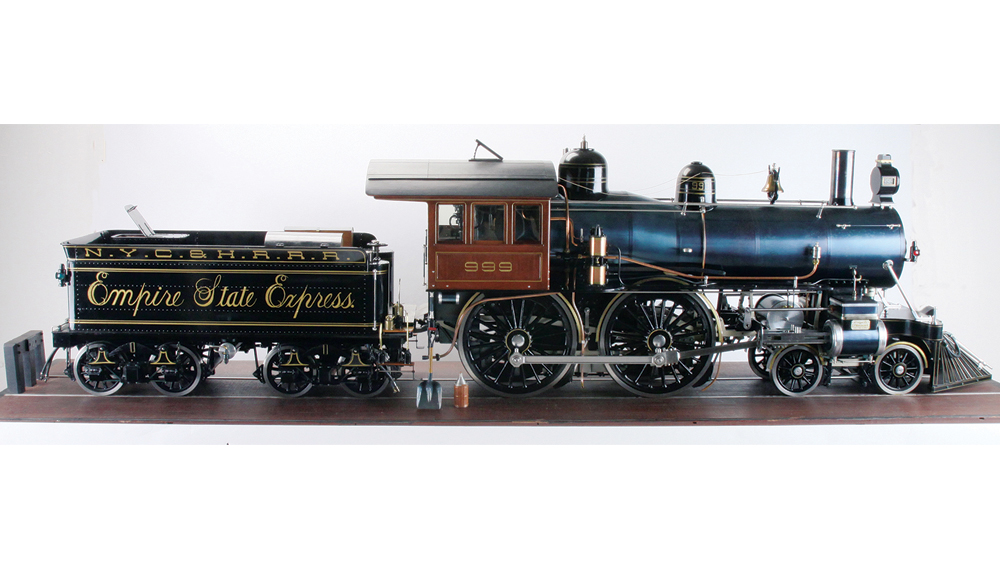 Martin Folb was driving from Los Angeles to New York to attend a convention on cut glass, one of his collecting pursuits, when he decided to take a detour to see an antique toy train set that was destined for auction. Folb had been spellbound by trains as a child, acquiring his first Lionel set at age 7 and joining the Train Collectors Association at 10, but he drifted away from them when he went to college, as so many youthful collectors do. But on that cross-country road trip, going five miles out of his way to have a peek turned into four hours of studying and photographing the lot: a 1936 special-order train set by Lionel in near-mint condition with its original packaging.

“I made a determination that the only way I was not going to get this set was if Bill Gates was in the audience and he wanted it,” Folb recalls.

On the big day of the auction, in fall 2006, Folb began bidding by phone from his home in Los Angeles, with Gary Zippie of Stout Auctions stationed on the other end of the line. Bids surged past the lot’s $150,000 reserve and powered toward an East Coaster’s pledge of $225,000, which the man had placed in the belief that the price was unlikely to fly higher than that. Now that man was desperately trying to get online to increase his bid—but he had not preregistered, which meant he could not commit to a sum that exceeded $15,000.

Zippie and Folb grasped the situation instantly: If Folb raised his bid to $230,000, the train was his. Folb sat and sweated. “Gary said, ‘Take your time.’ I thought about it for two minutes,” Folb says, but the outcome was never truly in doubt. “I had seen it. I had fallen in love with it, and I decided I had to have it.”

Folb got it, for a $230,000 hammer price that, with premium, totaled $253,000. And he has been generous with it, showing the set periodically at local train collectors’ events. The 62-year-old research physicist now owns 40 to 50 other train sets, as well as several hundred accessories such as station houses, lampposts, and the like. While the quality of his collection sets him apart, his ardor does not. The Train Collectors Association, which celebrated its 60th anniversary this year, counts around 28,000 dues-paying members. And though the train set is no longer the must-have Christmas toy, December remains a fine time to seek one at auction. Noel Barrett’s annual fall auction of antique toys, including several choice trains, is scheduled for December 5 and 6 in New Hope, Pa. Stout Auctions, located in Williamsport, Ind., will host a toy train sale on December 6. And Special Auction Services, based in Newbury, England, holds its annual Trains Galore sale on December 10 and 11.

Just as Folb had drifted away from trains as a college student, he found himself drifting back to them 10 to 12 years ago, as a grown man, for a grown-up reason. “When I was a little boy, every association I ever had with these trains was nothing but happy, positive memories,” he says. “How many things in your life generate happy, positive memories?”

Toy trains emerged in Europe in the 1860s, decades behind the appearance of their real-life counterparts, but the lag did not reflect any lack of desire from the children they would ultimately delight. The fundamental concept of “a toy”was suspect in Victorian times, and toys were often only allowed in the context of education—mechanical banks to encourage thrift, or a new animal for a Noah’s Ark menagerie as a Sunday school reward. But trains and other toys ultimately gained acceptance as playthings and became an established part of a middle-class childhood. Trains’ appeal is obvious on one level: They moved under their own power, at a time when few other toys could. But they enchant in subtler ways, too. The need for space for their layouts constricted them to a Christmas-only treat in cramped 20th-century American homes (but not in Folb’s, who kept a layout in his childhood bedroom on a 4-by-8-foot piece of plywood). Their expense, their complexity, and their dangers (19th-century steam-powered toy trains could explode just like the paddle steamboats of old, and early electric trains could deliver nasty shocks) made them a toy that kids enjoyed under the watch of an adult, and often, that meant playing with Dad—a novelty in its own right.

The steep retail prices—a standard three-car 20th Century Limited listed for $75 in 1935—and the need for supervision prompts the question of who these train sets were really for. “We call them children’s toys, but a lot were bought by adults for children to watch them play with,” says Noel Barrett, the auctioneer and toy expert. Recently, Bertoia Auctions of Vineland, N.J., had a trio of magnificent antique boxcars made by Märklin, a venerated German toy maker, for the American toy market. All three touted brands of beer—Schlitz, Budweiser, and Pabst—faithfully replicating the period advertisements that appeared on the brewers’ full-size boxcars. And all were produced around 1915, five years before Prohibition. Given how prominent women were in the temperance movement, it seems unlikely that the average American mother would let her impressionable little darlings play with toys emblazoned with ads for alcoholic beverages. “Those three are some of the best [of their type] I’ve ever seen,” says Rich Bertoia, the auction coordinator at Bertoia. “I put them down as ‘excellent,’ which almost never happens.” An excellent rating in the lot notes also adds credence to the notion that the boxcars probably never saw the inside of a nursery. In the 2013 sale, the Schlitz went for $30,680 against an estimate of $16,000 to 18,000; the Pabst for $28,320 against $12,000 to 15,000; and the Budweiser for $23,600 against $6,000 to $9,000.

Brewery boxcars aside, toy trains have long been a father-son bonding activity, and Russell McFall has a unique prize that proves the point: a layout of Carlisle & Finch toy trains dating to 1905 and considered the oldest continuously operating toy train layout in the United States. It was built for Elbridge Russell, who was born, lived, and died in the same Alameda, Calif., house. Assembled by Elbridge’s father, the 8-by-12-foot layout is thought to have taken up maybe 30 percent of the home’s attic. McFall, who began collecting toy trains after retiring from serving as president of Lockheed Martin Telecommunications, was specifically on the hunt for toy trains of standard and 2-inch gauge, which Carlisle & Finch produced. Today, the company survives as a maker of searchlights, but in 1897 it brought the first completely electrically powered trains to market (it left the toy business during World War I to supply searchlights to the military and never returned). McFall learned of the layout, which had been carefully extracted from the floor to which it was tacked down, and bought it at auction in 2005 for $64,000. McFall has five layouts of collectible trains, four of which he built himself, displayed in the 3,000-square-foot basement of his Pennsylvania home, but his favorite may be the only one that he did not design. He did augment it in 2007, adding a scarce Carlisle & Finch piece of elevated, circular track that does not connect or interfere with the original route. Its delightfully complex, overlapping circuit, which takes two and a half minutes to complete, makes it especially entertaining to watch. “It’s a unique layout for the period,” McFall says. “Nothing else is as extensive as this.”

While granting that it makes no sense to acquire the oldest known working toy train layout in America only to let it molder unused, McCall is an outlier among serious collectors. “Contemporary collectors, the people who pay the money, don’t run the trains,” Barrett says. Hugo Marsh of the British auction house Special Auction Services, who handled toy train sales at Christie’s London for years, affirms the sentiment. “If it’s a £10,000 locomotive,” he says, “you have to be very brave to run it.”

By that measure, McCall and Folb are brave men indeed. “I haven’t run the 20th Century Limited yet,” Folb says of his record-setting Lionel, “but I have run trains worth in excess of $100,000. I’m careful, but they’re meant to be run.” A former collector of classic cars, he was intrigued during a visit to the Nethercutt Museum in Sylmar, Calif., where all of the vehicles are maintained in drivable condition. “If the Nethercutt is willing to run a $200,000 Duesenberg, I’m willing to run a $200,000 train,” Folb says.

Ward Kimball shared his view. The late animator, one of Disney’s original Nine Old Men, unapologetically ran his extensive collection of toy trains, and his attitude did not affect their ultimate value. When Barrett auctioned off Kimball’s trains in two sales in 2004 and 2005, they collectively fetched $5.1 million.

The risks Kimball—as well as Folb and McFall—courted are not just derailments, but the bangs, scuffs, chips, and micro-accidents that inevitably occur when a pristine toy is removed from its box. In the universe of antique toy trains, as well as antique toys in general, condition beats all and has for some time; a relatively common toy train that has never left its perfectly preserved box can command more than a breathtaking rarity whose packaging was sacrificed to the fireplace on a cold Christmas morning and whose marks and dings confirm that children, long since grown, once had fun with it.

he auction record for a toy train is held by this 1936 special order from the American manufacturer Lionel, which collector Martin Folb purchased for $253,000 at a Stout Auctions sale in 2006. Antique toys that survive in such exquisite condition often have a sad story—perhaps a child rejected them on sight, or died before the gift-giving day arrived. But not this train. It was ordered by a wealthy businessman in Syracuse, N.Y., who had at least one young son and who may have had a sideline in toys, which would explain his ability to get a special train from Lionel. “There’s nothing like this,” says Greg Stout, the auctioneer and a toy train specialist. “This is it. The pinnacle.”

The train was dubbed the State Set because each passenger car is named for a U.S. state. The rarest is the Illinois car; Lionel dropped it after realizing the locomotives struggled to pull a foursome.

The locomotive’s wheels are made of pot metal, a relatively fragile material that may have rendered the toy’s front and back wheels faulty. That might have led the family to rebox the set and store it for decades.