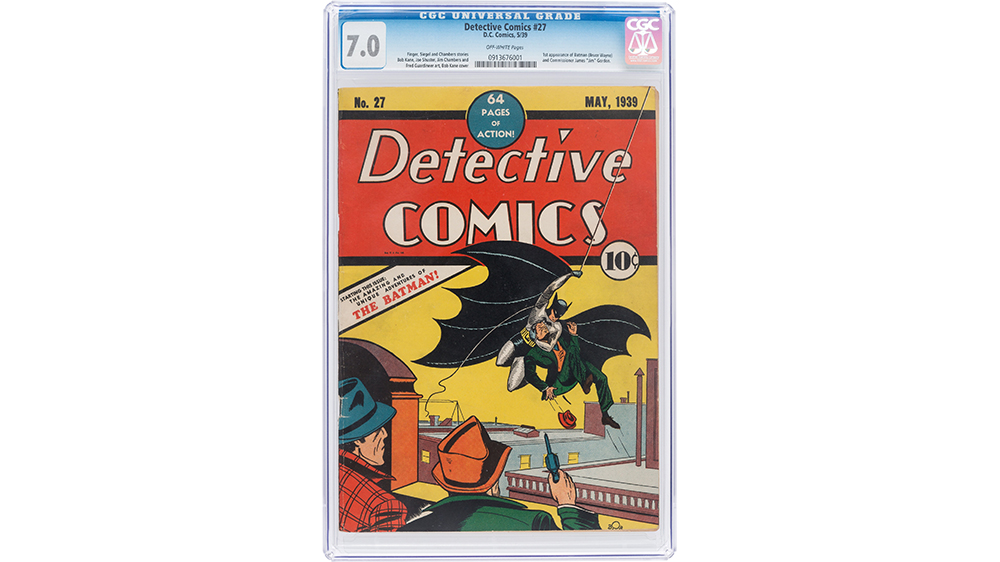 Batman’s alter ego, Bruce Wayne, may not look a day over 40, but he actually celebrated his 81st birthday earlier this year. And now, a rare copy of the comic book in which the masked vigilante and billionaire playboy made his first appearance is about to go up for bid.

Later this month, Heritage Auctions will sell an original copy of 1939’s Detective Comics No. 27 as part of its “Comics & Comic Art Signature Auction,” according to a press release. While any of copy of Batman’s debut hitting the block is reason for celebration, this pamphlet remains in excellent condition and could easily sell for more than $1 million.

Batman was far from the finished article during his first appearance. Bob Kane and Bill Finger’s “The Case of the Chemical Syndicate” is a decidedly pulpy affair, with the costumed hero mercilessly handing out justice to his foes and even carrying a gun. But while the character has been refined and given some actual complexity in the decades since, some trademarks—like his costume, secret identity and friendship with Commissioner Gordon—were there from the very beginning.

The copy of Detective Comics no. 27 on offer is completely unrestored and has been given a 7.0 grade by Certified Guaranty Company, a Florida-based comic book grading service. It’s one of only two copies to get that grade from the service, and only five unrestored examples have been graded higher. Heritage Auction sold an 8.0 grade copy of the book for $1.1 million in 2010, a hammer price that was the record for a comic until a copy of Action Comics no. 1, featuring the debut of Superman, sold for $3.2 million in 2014.

The back cover of Detective Comics no. 27  Heritage Auctions

“While any copy of this key comic is something special, we think this one stands up extremely well against any we’ve seen offered to the public,” the Dallas-based auction house said of the comic. “The yellows on the cover are clean and unsmudged, and few surviving copies can make that claim. And notice that the back cover is also appealingly clean. The book is also well-centered, with none of the back-cover ad wrapping around to the front. Also note that this book has no codes or markings of any sort, which can be said of very few 1939 comics.”

Despite his age, the Caped Crusader continues to be incredibly popular with kids and adults alike. The Batman, the tenth feature film focusing on the Dark Knight, is scheduled to be released in theaters in 2022. Detective Comics is also still going strong, with the series’s 1031st issue set to hit newsstands and comic book stores later this month.