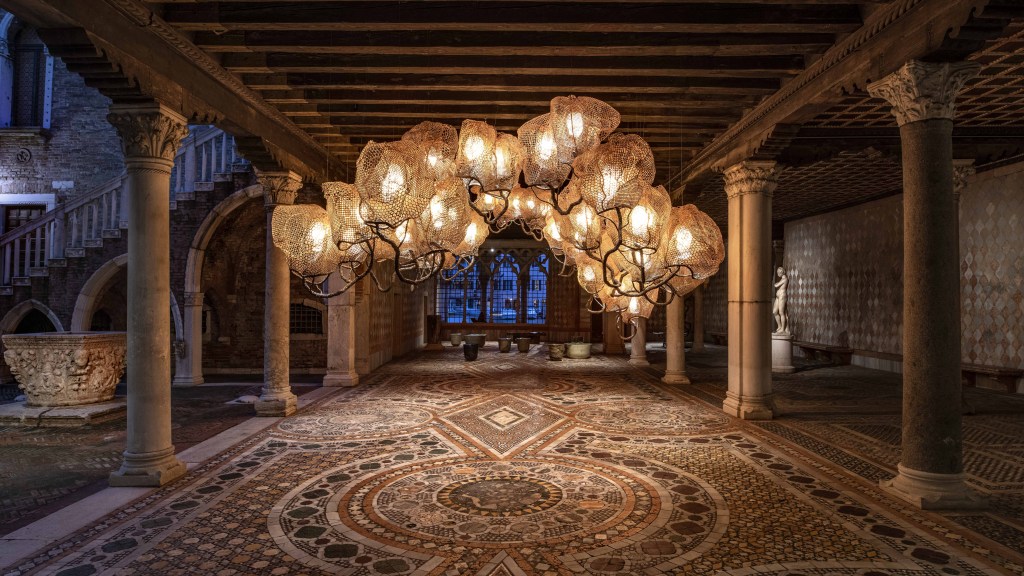 Your settee isn’t just for sitting. And your table isn’t only for eating anymore, either. Furniture is becoming more than its function and greater than its form—it’s conveying a message. For Virgil Abloh, the missive is admittedly bleak: The American designer, known for creating the fashion house Off-White and helming Louis Vuitton’s menswear, recently debuted Alaska, a polished-bronze chair that appears to be sinking into the ground—a comment on rising sea levels. A bit blunt, yes, but that’s the idea behind the conversation-starting furnishings in Carpenters Workshop Gallery’s Dysfunctional exhibit, on view against the historic, palatial backdrop of Venice’s Ca’ d’Oro through November 24.

As climate change approaches the point of irreversibility, designers are addressing the elephant in the room (before it, too, goes extinct) by creating works as cautionary tales. Some of Dysfunctional’s 50 pieces speak to global warming, while others encourage the viewer to rethink throwaway culture (a particular design problem in the Ikea era). Studio Drift’s Fragile Future chandelier, for instance, is composed of bronze electrical circuits and hundreds of handpicked dandelion seeds glued to LED cores, bringing to light a labor-intensive construction process, as well as man’s modern-day synergy with nature. Spanish designer Nacho Carbonell’s tree-like chandeliers (above) evoke a similar dichotomy, with limbs and branches composed of weighty mesh.

But Dysfunctional is no design-show stunt—it’s an outgrowth of a new movement fueled by eco-centric messages (that you can also happen to put in your living room). Ocean waste has long been an inspiration for Brodie Neill, whose Gyro Table (shown below) arranges blue and green microplastic chips—found on beaches—in a circle to loosely mimic Earth’s longitudinal and latitudinal lines. The designer’s Capsule hourglass, meanwhile, forgoes sand for plastic, also recovered from ailing oceans—a reference, Neill says, to the fact that we are running out of time to save the planet. Huy Bui takes a similar approach, probing our relationship to nature. His Geological Frame objects showcase recycled wood that melts across a brass frame—a study in how humans (and Bui himself) are shaping the Earth. It’s deeper thinking than you’d expect would go into your unassuming lounge chair or elegant credenza. And it might just be the catalyst for a bigger conversation—depending on where you’re sitting, of course.