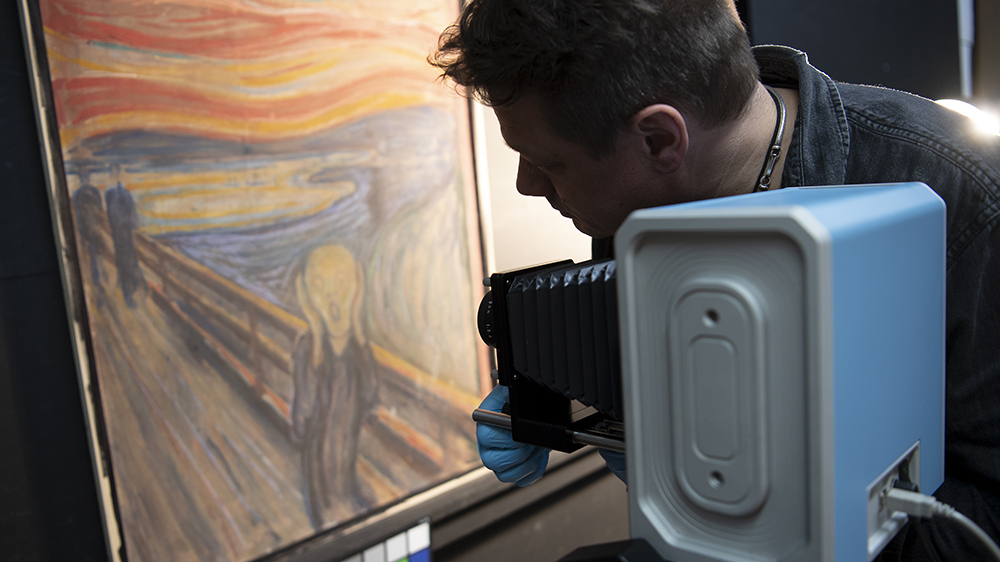 In 1904, a Danish critic took a close look at Edvard Munch’s The Scream and noticed something startling: faint handwriting in the far corner of the canvas that reads, “Can only have been painted by a madman.” Since then, the origins of the inscription baffled curators, some of whom assumed it was graffiti by a spectator or a jab at the famously anguished artist.

But a new analysis of the painting by Norway’s National Museum has revealed the words were added by Munch himself.

In the run-up to the inauguration of its renovated museum, now slated to open in Oslo in 2022, a new study conducted in collaboration with the Munch Museum has shed new light on the original 1893 version of The Scream. Using infrared technology to analyze the handwriting and compare it with Munch’s diaries and letters, researchers determined that Munch was indeed the short text’s author. He likely wrote the phrase in 1895 or shortly after that in response to particularly cutting criticism received after exhibiting The Scream for the first time in his native Kristiania.

Viewers were repulsed by the painting’s palpable agony, and some openly speculated that the screaming figure at its furious center must be the artist. During a discussion of the work at the Students Association, a young medical student Johan Scharffenberg even claimed that the work proved that Munch was not of sound mind. Munch returned to the incident again and again in his letters and diaries.

The faint script on Munch’s ‘The Scream’, which has been attributed to the artist  Børre Høstland/National Museum of Norway

“We know that he we was very upset when critics of his work questioned his sanity and called his paintings a disgrace,” National Museum curator Mai Britt Guleng told ARTnews. “Mental illness was a sore point for Munch because there was a history of mental illness in his close family.”

Both Munch’s father and sister suffered bouts of depression, and the latter was also diagnosed with schizophrenia. By his own admission, Munch had neither a happy childhood nor a smooth adult life. “Disease, insanity, and death were the angels that attended my cradle, and since then have followed me throughout my life,” he once wrote. Exacerbated by his alcoholism, Munch was finally hospitalized after a nervous breakdown in 1908.

He explicitly wrestled with depression, loss, and anxiety in his paintings, which often featured phantoms of lost love and family. According to a diary entry, Munch conceived of The Scream while walking out at sunset in Kristiania where, upon viewing the blood red clouds, he sensed an “infinite scream passing through nature.” Between 1893 and 1910, Munch made four versions of the scene—two paintings and two pastels—as well as a number of prints of the same subject.

Reflecting on his masterpiece, Munch said his goal was “the study of the soul, that is to say the study of my own self.”