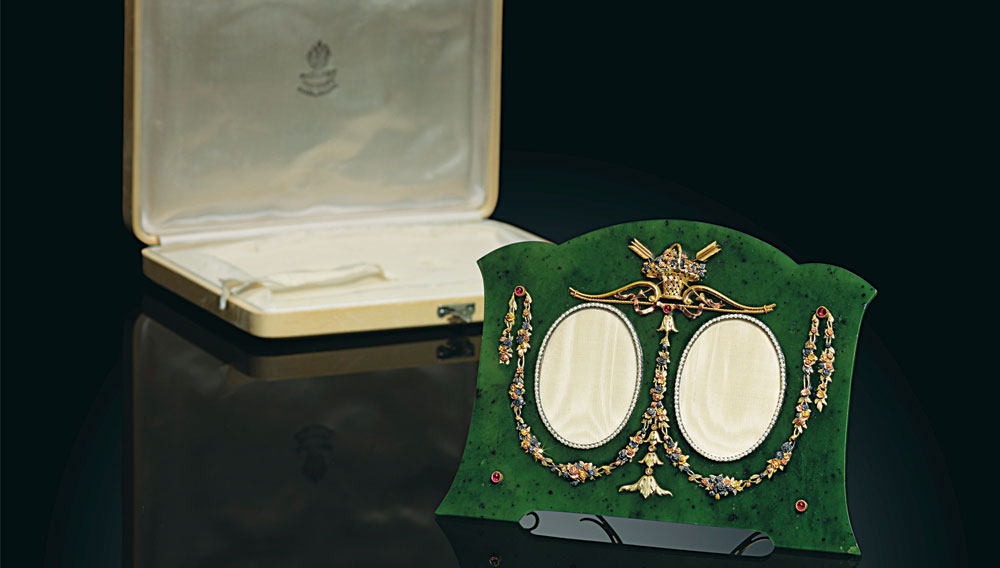 The House of Fabergé is famous for the enameled and bejeweled Easter eggs that it made for the Russian royal family, but under the direction of Peter Carl Fabergé—who ran the business from 1872 until it was nationalized in 1917 following the Russian Revolution—the company’s workshops produced a broad range of wares that included the functional as well as the fanciful. “It’s impossible to list every type of thing Fabergé did,” says Peter Schaffer, a co-owner of A La Vieille Russie, an antiques dealer in Manhattan that features Fabergé items. “If you name it, Fabergé made it.”

Picture frames? Yes. Ashtrays? Yes. Fans? Compacts for makeup? Clocks? Yes to all. Buttons? Schaffer knows a client who commissioned a designer to fashion a dress that showcases a set of Fabergé buttons. Cookware? During World War I, the mothers of well-to-do Russian soldiers commissioned copper pots and cups for their sons to use in the trenches.

Schaffer recently received an exquisitely ornamented set of cheese-course cutlery consisting of 12 knives and 12 forks. Fabergé made the blades and tines, but the handles were crafted in Japan. A Japanese-art expert whom Schaffer consulted about the cutlery told him he had never seen a finer collection. “But the bottom line is it’s by Fabergé,” says Schaffer. “It should be the highest quality.”

Katherine Purcell, associate managing director of Wartski, a London-based dealer of Fabergé items, says that even the common wares reflect the lavish attention they received from Fabergé’s artisans. She describes a gardening tool that once sold through Wartski: “The handle was in the form of a snail carved from hard stone. That was something that not only helped functionally but was quite practical. It fit nicely in the hand.”

In November, London branches of Christie’s and Sotheby’s will stage auctions that include Fabergé objects. While whimsical items generally perform well at auction—two petite carved elephants sold for about $473,500 apiece during a Christie’s auction last November—more practical ones can also command high prices. During the same auction that featured the elephant statuettes, a jeweled four-color nephrite picture frame sold for about $160,000. “Frames, one way or another, are always popular,” says Alexis de Tiesenhausen, international director of the Russian department at Christie’s.

As digital images replace printed photos, however, the frames eventually could join other once-functional Fabergé items in obsolescence. Darin Bloomquist, director and head specialist of the department of Russian works of art at Sotheby’s, says that Peter Carl Fabergé probably would have liked the idea of his frames being adapted for use with a digital display. Bloomquist is not necessarily opposed to such alterations either. “Some pieces of Fabergé should be in museums and should not be altered in any way, but some things are less sacred,” he says. “As long as it can be put back the way it was, why not?”

Bloomquist is aware of other types of retrofitting or repurposing. He cites the practices of using Fabergé cigarette cases as business-card holders and of rewiring Fabergé bell pushes (devices used to summon domestic staff) for modern electrical voltages. Schaffer also recalls requests to transform cane handles into pendants.

But it seems that most collectors leave their Fabergé objects on display instead of finding a way to put them back to use. “Most of them are not used,” Purcell says. “Some are in such pristine condition that I wonder if they were ever used.”