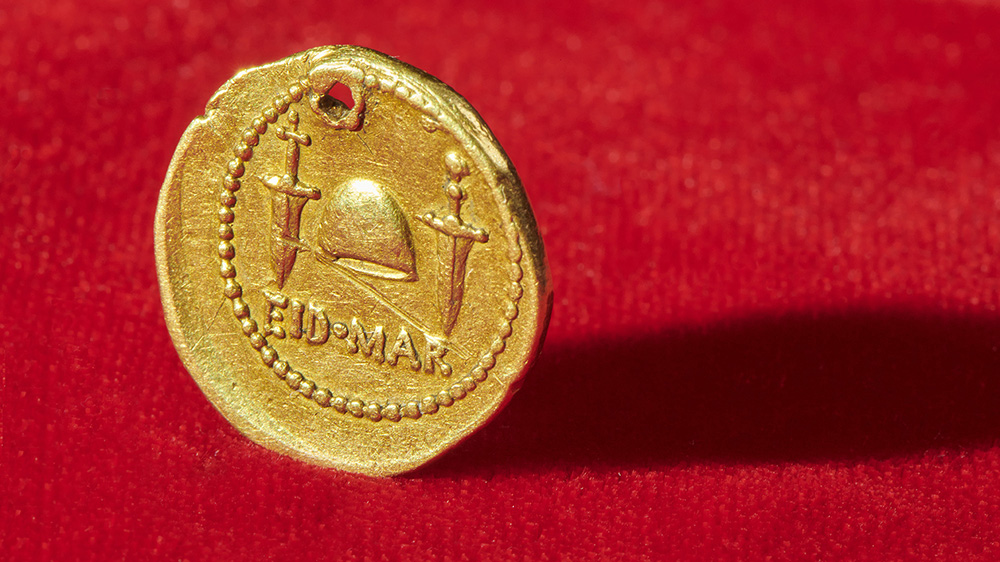 Not everyone looks at the Ides of March as a dark day. For some, it was the exact opposite.

In fact, there was at least one very important person in ancient Rome who saw fit to celebrate the day Julius Caesar was assassinated in 44 BC by minting a gold coin. Now one of the few remaining examples of that celebratory token is expected to sell for up to $2 million when it goes up for auction later this spring.

The morbid memento will be sold by European coin auction house Numismatica Ars Classica at the end of May in Zurich, reports Bloomberg Businessweek. The gold coin is known as the “Eid Mar,” which translates to the “Ides of March” or March 15. That phrase is inscribed on one side of the coin along with a depiction of two daggers and the cap traditionally given to emancipated slaves (in case you weren’t sure how some viewed Caesar’s rule). On the other side is a Marcus Junius Brutus, one of the assassination’s ringleaders and the person the auction house says is responsible for having the coin minted.

The “Eid Mar” is slightly smaller than a quarter and is thought to have been worn by one of the emperor’s murderers. It’s one of just three that exists to this day and spent the previous decade on display at the British Museum. Another was sold by Roma Numisimatics in 2020, which the third is in the collection of the Deutsche Bundesbank.

“It’s priceless, but it still has a price tag,” the auction house’s managing director, Arturo Russo, told Bloomberg. “To have a coin that commemorates such a well-known event, such a famous event, an event that has changed completely the course of history is quite extraordinary.”

Numismatica Ars Classica hits the auction block on May 30, and don’t be surprised if it sells for somewhere north of its $2 million high estimate. In fact, that figure just might be a bargain. The “Eid Mar” sold for a stunning $3.5 million two years ago.