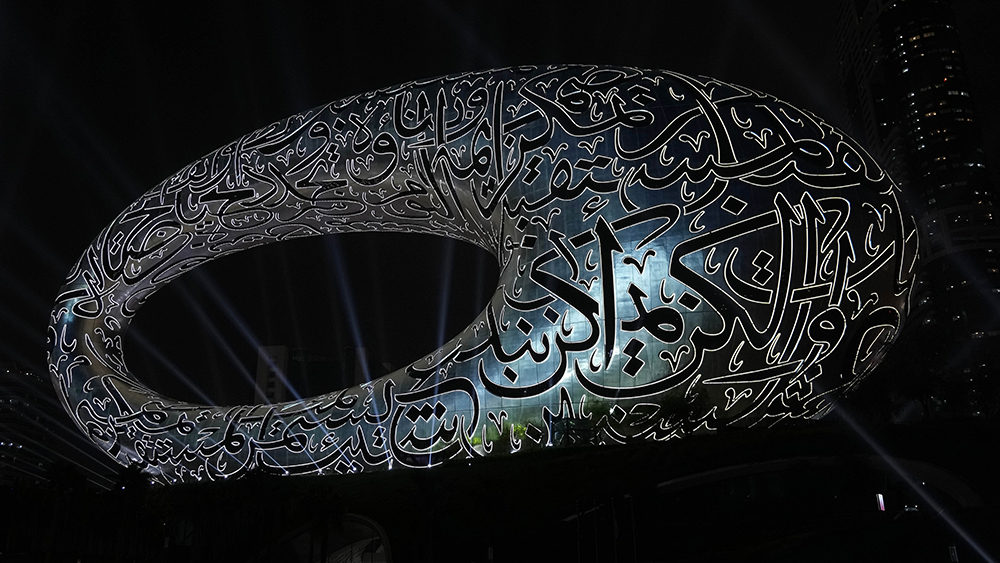 From New York’s circular Guggenheim Museum to the alien-like exterior of Austria’s Kunsthaus Graz, the most interesting museums are known for more than holding a Monet. In 2017, Dubai debuted its Etihad Museum with a manuscript-shaped exterior that easily made the ranks of unusual artistic spaces. And now, a glimmering new addition to the city is open to the public.

Dubbed the Museum of the Future, the seven-story building stands 78 meters high without support columns. Architecture firm Killa Design and Dubai Future Foundation designed the museum that features 1,024 stainless-steel panels—which were all made, at least in part, by robots. Inside its space-age interior there are six permanent exhibition spaces, a 420-seat auditorium, a restaurant, café, retail stores and parking. The low-carbon building was built using low-energy and water engineering solutions, as well as passive solar architecture (using the sun’s energy for heating or cooling) for an eco-conscious result.

Its wow factor, however, is the Arabic calligraphy on both its exterior and interior that quotes His Highness Sheikh Mohammed bin Rashid Al Maktoum. It translates as: “We may not live for hundreds of years, but the products of our creativity can leave a legacy long after we are gone. The future belongs to those who can imagine it, design it, and execute it. It isn’t something you await, but rather create. Innovation is not an intellectual luxury. It is the secret behind the evolution and rejuvenation of nations and peoples.”

The building’s bold shape was chosen to represent mankind’s passion for the arts and creating. Meanwhile, the green hill it stands on is meant to represent Earth and the building’s oval-shaped hole, or void, represents an unburdened future—meant to inspire today’s creators and innovators. “The Museum of the Future is a ‘living museum,’ constantly adapting and metamorphosing as its very environment drives continual and iterative change to its exhibits and attractions,” says Mohammed Al Gergawi, chairman of the Dubai Future Foundation. “The museum brings together futurists, thinkers, innovators, and the public in a testbed of ideas that define the world of the future and shape the way we interact with our world to come.”

The museum is in Dubai’s Financial District, adjacent to the Emirates Towers. Visit the Museum of the Future website for more details.