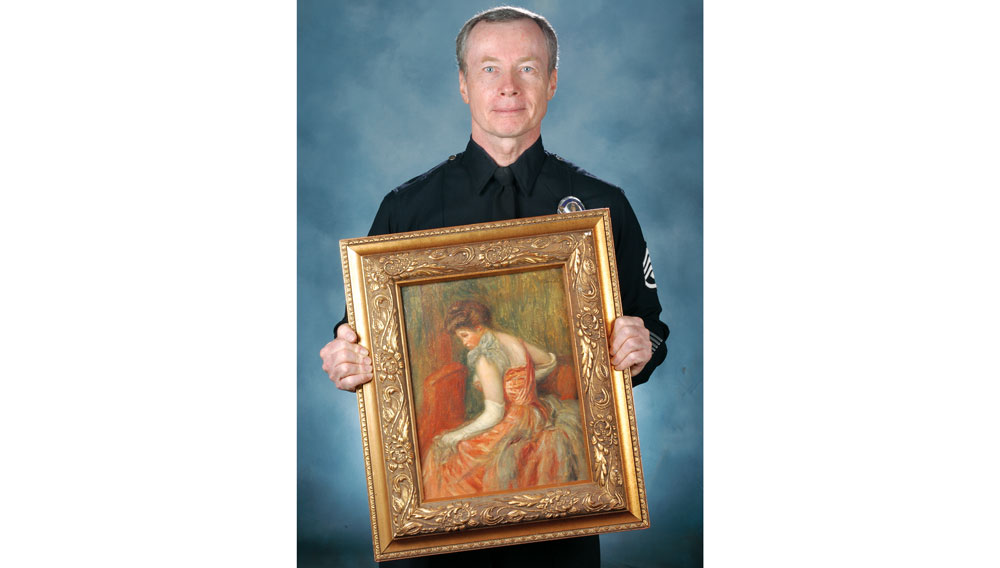 Last October, Detective Don Hrycyk solved one of the biggest cases of art theft in Los Angeles history, recovering more than $13 million in works by artists such as Marc Chagall and Hans Hofmann that had been stolen from a home in Encino. For Hrycyk, it was all part of the job: For 21 years, he has led the Los Angeles Police Department’s Art Theft Detail, the only unit in the country devoted solely to art crime, and has returned an estimated $121 million in stolen works to their rightful collectors.

How busy are you?

We are usually working on 10 to 15 cases at a time. But they can take years to complete—the Encino case took six years.

Tell us about them.

We try to provide a service to anybody—collectors and artists—who gets works stolen or is swindled. The vast majority of stolen art is through run-of-the-mill burglaries. The thief will take cash, jewelry, a camera, and then they might see an Erté bronze or a painting in a fancy frame, so they take that, too. When we started, art theft was defined only as stolen paintings, sculptures, and limited-edition prints. But now, we are all over the map—collectibles, animation art, rare books. We also handle some insurance fraud cases: Someone might report their Matisse missing, but it’s a fake. And fraudulent art is a big part of our caseload, like the people selling a fake Monet, Renoir, or Picasso drawing for $1,000 online. A lot of these people are just ignorant; they don’t know it’s fraudulent. We’re looking for someone who has larceny in their heart.

A lot of these thefts are huge betrayals. There was this guy—Matthew Taylor—a very slick con man who sold over 100 [fake or stolen] paintings to one person here in town. From this one rich guy alone, he made several million dollars. The victim was not an art person, but he was so proud of his collection that he would have charity groups come to his house and either he or Matthew Taylor would take the group on a tour of the artwork. He invited curators from the L.A. County Museum of Art, from the Getty Museum, people who are subject-matter experts. You know how many of these people told him that he had fake art?

None. And they knew it. I asked them why and it had to do with strategy: It was a social visit. They didn’t want to let the wind out of the sails. They were looking at him as a prospective donor to their museums and didn’t want to insult his judgment. And they worried about liability—they didn’t want to become the instigator of a lawsuit. [In July 2013, Taylor was convicted of selling stolen art and tax evasion and sentenced to 7½ years in federal prison.]

What would you tell collectors?

Don’t buy on impulse. Become an informed purchaser and take the time to do research. And always get a second opinion on the authenticity and value of the art.